Pros and cons of Voluntourism

Why “voluntourism” is harmful. What's Wrong with Voluntourism? I will preface this by saying that a lot of my doctors and dentists were white Americans, and that I have a soft spot in my heart for those people because they are working hard to change someone else's life. 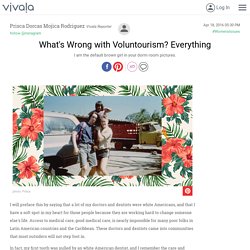 Access to medical care, good medical care, is nearly impossible for many poor folks in Latin American countries and the Caribbean. These doctors and dentists came into communities that most outsiders will not step foot in. In fact, my first tooth was pulled by an white American dentist, and I remember the care and attention I got like it was yesterday. Letters: Sounding off on older Vancouver, voluntourism in Cambodia and more. The booming business of voluntourism. Fancy being Mother Teresa for a bit? 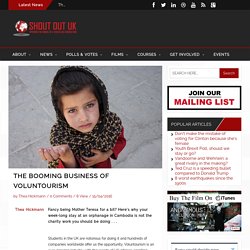 Here’s why your week-long stay at an orphanage in Cambodia is not the charity work you should be doing . . . Students in the UK are notorious for doing it and hundreds of companies worldwide offer us the opportunity. Voluntourism is an ever-growing industry with thousands of UK citizens enrolling every year — with the best intentions, I might add — to provide essential help to those in need. Yet, is it actually helping? Unfortunately, the reality may be rather despairing. Plus de mal que de bien. PHNOM PENH, Cambodge — À l’instant où le tuk-tuk bringuebalant me dépose aux portes de l’orphelinat Home of Hope, après s’être frayé un chemin à travers les rues agitées de Phnom Penh, sept volontaires espagnoles sont, elles, en train de faire leurs adieux. 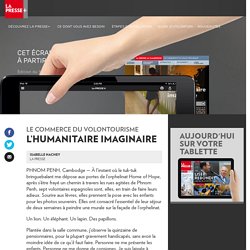 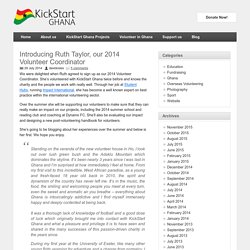 She’s volunteered with KickStart Ghana twice before and knows the charity and the people we work with really well. Through her job at Student Hubs, running Impact International, she has become a well known expert on best practice within the international volunteering sector. KickStart Ghana » Volunteering Abroad with Children: A game of double standards? Here is the second blog entry from our 2014 Volunteer Coordinator, Ruth Taylor. 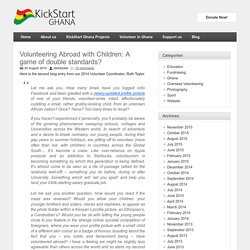 KickStart Ghana » International Volunteering: A Shift in Thinking. Here is the third blog entry from our 2014 Volunteer Coordinator, Ruth Taylor. 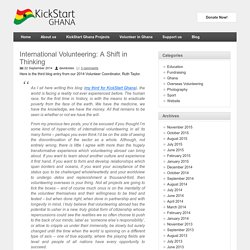 As I sit here writing this blog (my third for KickStart Ghana), the world is facing a reality not ever experienced before. The human race, for the first time in history, is with the means to eradicate poverty from the face of the earth. 'Making mistakes with people's lives': the ethics of orphanages and voluntourism - Late Night Live. Tara Winkler thought she was doing the right thing when she travelled to Cambodia to volunteer in an orphanage, but she unwittingly became part of an industry that relies on taking children from their families and keeping them in institutions. 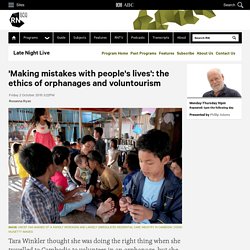 Now she hopes to raise awareness of the problems with both orphanage tourism and other kinds of voluntourism. Late Night Live reports. Tara Winkler was barely out of high school when she decided to take a gap year, travelling through Thailand, Laos and Vietnam before arriving in Cambodia, one of the poorest countries in the world. Interview with Anna McKeon, Communication Consultant, Better Care Better Volunteering Network ( Part I) 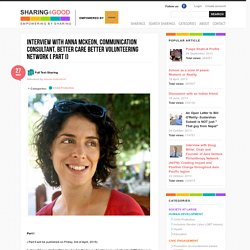 How did you start getting involved in the issue of orphanage volunteering? What is your educational and professional background. Ethical Inquiry: May 2013. Helping or Hurting? 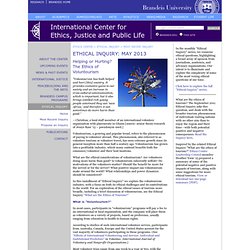 The Ethics of Voluntourism "Voluntourism has both helped and hurt [this] country. It provides economic gains to our society and an increase in cross-cultural communication, which is important, but it also brings entitled rich young people convinced they can 'save Africa,' and therefore it can sometimes do more harm than good. " – Christian, a local staff member of an international volunteer organization with placements in Ghana [source: senior thesis research of Jessye Kass '13 – pseudonym used.]

How to screw up orphan care in the name of Jesus. Is that even possible? 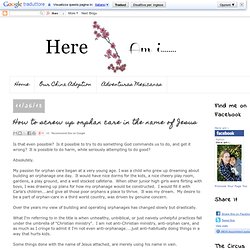 Is it possible to try to do something God commands us to do, and get it wrong? It is possible to do harm, while seriously attempting to do good? Absolutely. My passion for orphan care began at a very young age. I was a child who grew up dreaming about building an orphanage one day. Over the years my view of building and operating orphanages has changed slowly but drastically. Volunteer Tourism - needs to go viral, not parasitic - Ethical Traveller. Missionvale, South Africa Photo: Una Shannon, volunteer with People and Places At the last view, 415 people had watched the debate which took place at the World Travel Market in London in November 2012 on volunteering tourism on YouTube. Viewpoint: Is volunteer tourism a bad thing? Volunteering abroad to build schools or dig wells might make people feel good about themselves - but it can be detrimental to those who are supposed to be helped, writes tour company founder Daniela Papi.

I've volunteered all over the world - building homes in Papua New Guinea, doing post-tsunami work in Sri Lanka, helping paint a school in Thailand - and I used to think it was the best way to travel. In 2005 I even organised my own volunteer trip - a bike ride across Cambodia with five friends. We were going to raise funds to build a school, and teach students we met along the way about the environment and health. Where are the children? Orphanage voluntourism in Ghana. By Hanna Tabea Voelkl As part of her Masters research on “Children, Youth, and International Development” at Brunel University, Hanna Tabea Voelkl conducted a qualitative case study in Ghana that focused specifically on the experiences of orphanage children with international volunteer tourists. The ethics of paying to volunteer abroad. Are non-profit pay to volunteer organisations actually ethical?

Why it is still better to independently organise a voluntary placement abroad, without paying. On January 21st SOAS hosted the International Development and Volunteering Fair. The Road to Hell is Paved… Volunteering The Wise Way - Travel Culture Magazine. The hand painted signs on the roads up to main Kilimanjaro gate vye for space: endless orphanages and baby homes, the words in English, not the native Swahili that we speak here in Tanzania. There’s something unnerving about the sheer number of homes, clustered together, all conveniently on the main tourist routes. In Arusha, the centre in Tanzania for Kilimanjaro climbs, the biggest mountain in the world, the local supermarket, Shoprite, heaves with fresh faced volunteers. The checkouts reverberate with Swedish, American, English and Spanish chatter.

Whether it’s the economic recession in North America and Europe, or the desire to get an enhanced and quirky curriculum Vitae, Africa has never seen so many volunteers. Voluntourism Prezi  Voluntourism - Points to Consider. The idea of a “Volunteer vacation” is an appealing one, especially on a family vacation: how wonderful, to contribute to a local and less-privileged community, and at the same time teach your children the joy of helping others. In defence of 'voluntourists' Beware the voluntourists intent on doing good. I recently came across an interesting article questioning voluntourism and assessing whether it does more harm than good in communities of the global south. 5 Reasons to Volunteer Abroad (And 5 Reasons Not To) The-tragic-rise-of-gap-year-voluntourism-8473608.html?fb_action_ids=10151239633426714%2C10151239613521714%2C10152498333380624%2C10152445565450314%2C10152445539250314&fb_action_types=news.reads&fb_source=other_multiline&action_object_map=%7B%22101512396334.

Cambodia's Orphan Business - People & Power. Between the 1970s and 1990s, Cambodia was ravaged by civil war. A rant about overseas volunteering. Brangelinas need not apply: A Cambodian orphanage is leading the march against 'voluntourism' - Asia - World. Further Attention on the Drawbacks of Voluntourism.