So You Want My Job. Rich and poor: Will the inequality gap ever be bridged? How stress affects your body - Sharon Horesh Bergquist. CyberWar Threat. How to Treat Life Like an Experiment. How to Be Clutch. Riding Your Flow: 8 Steps for Enhancing Your Creativity and Productivity. Dr Kelly Neff, The Lucid Planet. 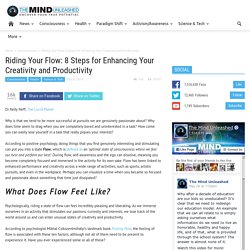 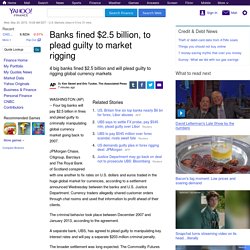 JPMorgan Chase, Citigroup, Barclays and The Royal Bank of Scotland conspired with one another to fix rates on U.S. dollars and euros traded in the huge global market for currencies, according to a settlement announced Wednesday between the banks and U.S. Justice Department. Currency traders allegedly shared customer orders through chat rooms and used that information to profit ahead of their clients. The criminal behavior took place between December 2007 and January 2013, according to the agreement. A separate bank, UBS, has agreed to plead guilty to manipulating key interest rates and will pay a separate $203 million criminal penalty. Income inequality begins at birth and these are the stats that prove it. Children riding home from school watch as Baltimore residents celebrate at the corner of West North Avenue and Pennsylvania after authorities released a report on the death of Freddie Gray on Friday. 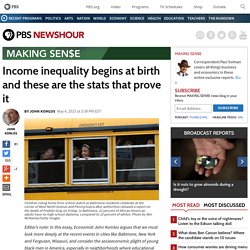 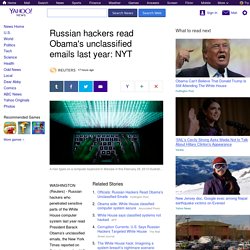 "There is no evidence that the president's email account itself was hacked, White House officials said. South Korea battling digital threat from northern rival. Then more ominously on December 23 last year, computers at the country's nuclear operator were breached. 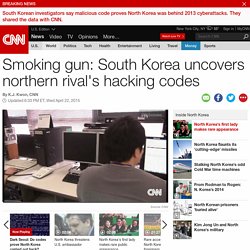 Again cybercrime was suspected. The source of these attacks? North Korea. The child soldiers of Yemen. Sanaa, one of the oldest cities of the world, is now a patchwork of many checkpoints. 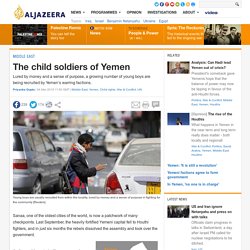 Last September, the heavily fortified Yemeni capital fell to Houthi fighters, and in just six months the rebels dissolved the assembly and took over the government. Ukraine recruits Internet army to fight Russian trolls - Feb. 25, 2015. The government says it needs to combat propaganda spreading from Russia. 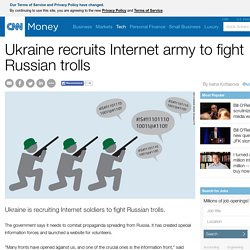 It has created special information forces and launched a website for volunteers. "Many fronts have opened against us, and one of the crucial ones is the information front," said Ukraine's information minister Yuri Stec. Russia annexed Crimea from Ukraine last year, and has been hit with Western sanctions for supporting armed separatists in eastern Ukraine. Cyberwar Timeline: The roots of this increasingly menacing challenge facing nations and businesses.

By Beth Rowen A cyberattack is the deliberate breaching of an entity's computer system with the intent of stealing intellectual property or financial resources; disabling, wiping out, or manipulating a computer or network; or causing other damage or disruption to a computer-driven system. 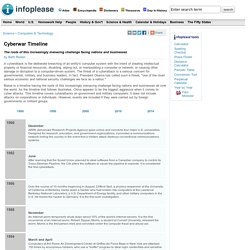 The threat of a cyberattack is a serious concern for governmental, military, and business leaders. In fact, President Obama has called such a threat, "one of the most serious economic and national security challenges we face as a nation. " Gallery: The power of water. “Maybe ignorance is bliss, but we can’t be ignorant any more. 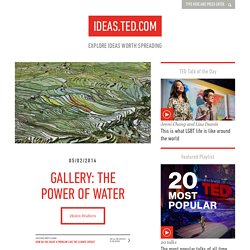 The consequences are too dire for human health and the health of the planet.” Photographer Ed Burtynsky is contemplating climate change, an unheralded but ever-present character in his latest book and film, Watermark, a clip of which he showed at TED2014 in Vancouver. And the mild-mannered artist is fired up. “There is a fundamental flaw in democracy, where career politicians vie for power in the next election and long-term thinking has somehow disappeared,” he told me last week. Hungry Planet: What The World Eats. Across America, whites are biased and they don’t even know it. Most white Americans demonstrate bias against blacks, even if they're not aware of or able to control it. 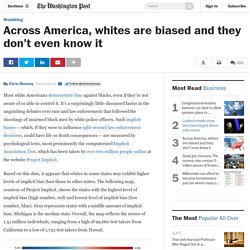 It's a surprisingly little-discussed factor in the anguishing debates over race and law enforcement that followed the shootings of unarmed black men by white police officers. Such implicit biases -- which, if they were to influence split-second law enforcement decisions, could have life or death consequences -- are measured by psychological tests, most prominently the computerized Implicit Association Test, which has been taken by over two million people online at the website Project Implicit. Based on this data, it appears that whites in some states may exhibit higher levels of implicit bias than those in other states. The following map, courtesy of Project Implicit, shows the states with the highest level of implicit bias (high number, red) and lowest level of implicit bias (low number, blue).

What would you do? Best Motivational Speech ~Secrets to Success, How Bad Do you Want it? {Full Speech} Teaching Strategies. How Can Your Librarian Help Bolster Brain-Based Teaching Practices? Librarians may be a teacher’s best resource when it comes to implementing inquiry-based teaching strategies. Continue Reading How Integrating Arts Into Other Subjects Makes Learning Come Alive Several schools, including ones in high-poverty areas, are making art critical to the learning of more academic subjects. They’re seeing remarkable student improvement as a result of arts integration. Continue Reading How Educators in Rural New York got Creative with Common Core A small school district in Upstate New York tossed out state-developed Common Core teaching materials and let teachers create their own tools.

Continue Reading What Students Can Learn From Taking Financial Risks in Class. A School That Ditches All the Rules, But Not the Rigor. Sixth graders ditch traditional lessons to create video game businesses. Netflix.