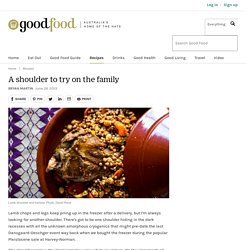 There's got to be one shoulder hiding in the dark recesses with all the unknown amorphous cryogenics that might pre-date the last Dansgaard-Oeschger event way back when we bought the freezer during the popular Pleistocene sale at Harvey-Norman. The shoulder carries the most complex array of musculature. It's the crossroads of the neck, the foreleg and the best end, so it's a bugger to carve at the table, but this intricate arrangement means you get lots of hidden treasures and plenty of connective tissue that melts during the long, low-temperature cooking. It's also the perfect size to feed four people, which we are now. The leg always yields way more and for the most part is boring. Lamb Shank Sous-Vide. The amount of flavor in meat is determined to a large extent upon the amount of work that muscle had to do, and so shanks are very flavorful. 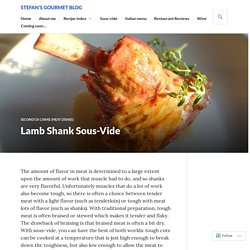 Unfortunately muscles that do a lot of work also become tough, so there is often a choice between tender meat with a light flavor (such as tenderloin) or tough with meat lots of flavor (such as shanks). With traditional preparation, tough meat is often braised or stewed which makes it tender and flaky. The drawback of braising is that braised meat is often a bit dry. With sous-vide, you can have the best of both worlds: tough cuts can be cooked at a temperature that is just high enough to break down the toughness, but also low enough to allow the meat to stay succulent. The meat will be fork tender, succulent, and very flavorful. The only drawback of the low temperature is that it takes a long time, between 24 and 72 hours. Indian-Spiced Oven-Cooked Pulled Lamb Sandwiches Recipe. Indian Tandoori Spiced Leg Of Lamb Recipe.

Stefan's Gourmet Blog. My recent short trip to India inspired me to try and cook some more Indian food. 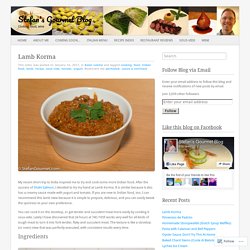 After the success of Shahi Salmon, I decided to try my hand at Lamb Korma. It is similar because it also has a creamy sauce made with yogurt and tomato. If you are new to Indian food, too, I can recommend this lamb stew because it is simple to prepare, delicious, and you can easily tweak the spiciness to your own preference. You can cook it on the stovetop, or get tender and succulent meat more easily by cooking it sous-vide. Lately I have discovered that 24 hours at 74C/165F works very well for all kinds of tough meat to turn it into fork tender, flaky and succulent meat. Ingredients For 2 servings 350 grams (.7 lbs) lamb stewing meat, in cubes, I used neck because of its great marbling 1 onion about 80 ml (1/3 cup) yogurt 1 Tbsp tomato paste 1 small onion, chopped 1 clove garlic, minced 1 tsp grated fresh ginger 1 tsp ground coriander 1 tsp ground cumin 1/2 tsp ground cardamom 1/2 tsp chilli flakes, or to taste. 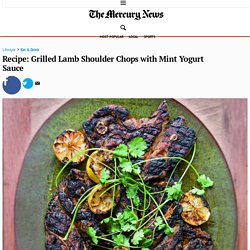 These chops are best cooked over a very hot charcoal or wood fire. The point is to char the outsides very quickly before you cook the meat so long that it becomes tough. Most gas grills don’t get hot enough. If your gas grill does not get super hot, cook the chops instead in a searing-hot cast-iron skillet or grill pan, such as a 20-inch Lodge cast-iron grill/griddle. 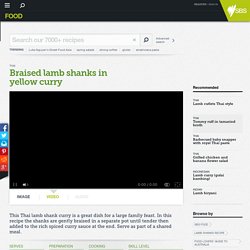 Heat a large pot (large enough to fit all the shanks at once) over medium-high heat and seal shanks in a little oil and season with sea salt. Remove from the pan. Add vegetables to pot, return shanks to the pot on top of the vegetables. Add enough water to just cover the shanks, bring to the boil then reduce heat until just simmering. Cover and simmer for approximately 2 hours or until tender. Meanwhile, to make the curry paste, pound all ingredients together in a mortar and pestle until a smooth paste forms. Heat a large saucepan over medium heat, gently fry curry paste in vegetable oil, until aromatic. MY KITCHEN IN SPAIN: MY FRIEND, MISTRESS OF THE FIRE. What in the world is the feminine for “grill meister”? 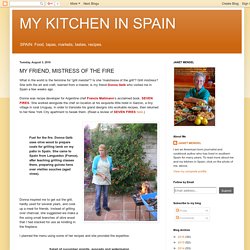 Is she “maistresse of the grill”? Grill mistress? She with the art and craft, learned from a master, is my friend Donna Gelb who visited me in Spain a few weeks ago. Donna was recipe developer for Argentine chef Francis Mallmann’s acclaimed book, SEVEN FIRES. She worked alongside the chef on location at his exquisite little hotel in Garzon, a tiny village in rural Uruguay, in order to translate his grand designs into workable recipes, then returned to her New York City apartment to tweak them. Fuel for the fire. Donna inspired me to get out the grill, hardly used for several years, and cook up a meal for friends. I planned the menu using some of her recipes and she provided the expertise. Salad of cucumber granita, avocado and watermelon. 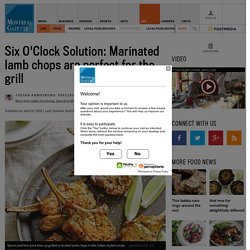 Anjali Pathak, author of The Indian Family Kitchen (Appetite by Random House, $29.95), likes to marinate the chops in a mixture of chilies, coriander, turmeric and cumin before grilling or broiling the meat. She remembers enjoying this recipe first when visiting Indian family members in Australia. Granddaughter of the founders of the Indian-style seasonings company Patak’s and a chef and cooking teacher well known in the U.K., Pathak has several recipes for lamb in her beautiful, new book. It’s a good read thanks to anecdotes accompanying each of its 120 recipes. Indian cuisine need not be intimidating, is her message and her book is packed with tips and background information that ensure users will have success. Lamb shoulder with pomegranate glaze Recipe - Middle Eastern. Roast with the most: Lamb shoulder with pomegranate glaze. 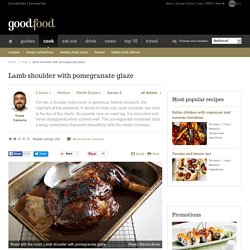 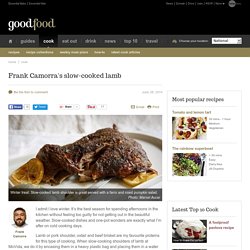 Photo: Marcel Aucar I admit I love winter. It’s the best season for spending afternoons in the kitchen without feeling too guilty for not getting out in the beautiful weather. Marinated Greek Lamb Chops with Roast Potatoes (Paidakia) When you buy a good rack of lamb, the sky is the limit on how to best cook it! 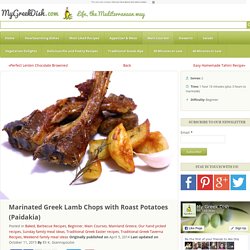 In most restaurants you will find the rack of lamb ‘frenched’, where the rib bones are exposed by cutting off the fat and meat covering them for better presentation.