Sicilian Stuffed Eggplant (Melanzane abbottonate) Although I have been to Sicily a number of times and I have tasted local dishes there like caponata, pasta con le sarde, arancini, and busiate, I had never heard of melanzane abbottonate until I read about them on Stefano’s blog. 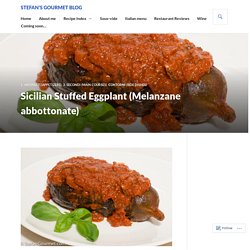 Stefano is an Italian chef, author of cookbooks, and cooking teacher who lives in the UK. His recipes are always well researched and his is one of my favorite blogs (in fact he has two blogs that I follow, also one in Italian). Melanzane abbottonate, or Mulinciani ‘mbuttunati in Sicilian, literally means “buttoned up eggplants”. The slit that is made in the aubergine to insert the filling looks like a button hole. Breaded Eggplant Cutlets Recipe on Food52. Author Notes: With a crispy crust and juicy center, these cutlets are just as addictive as their chicken counterparts. 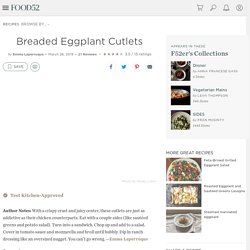 Eat with a couple sides (like sautéed greens and potato salad). Turn into a sandwich. Chop up and add to a salad. Cover in tomato sauce and mozzarella and broil until bubbly. Breaded Eggplant Cutlets Recipe on Food52. Roasted Eggplant With Miso and Sesame Seeds. Eggplant ‘Meatballs’ (Polpette di Melanzane) Eggplant is a prominent ingredient in Italian cooking, and it is prepared in many ways. 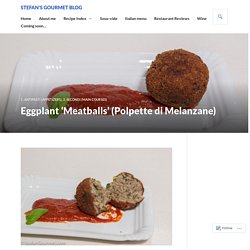 These eggplant balls are crispy on the outside and soft on the inside, with a lot of flavor, and are a great vegetarian appetizer or main course. As usual, it pairs well with tomatoes and basil. Ingredients Makes 8 polpette, 1-2 per person as antipasti or 3-4 per person as a vegetarian main course 2 eggplants, about 700 grams (1.8 lbs) total weight. Barbecue Eggplant. Hello! 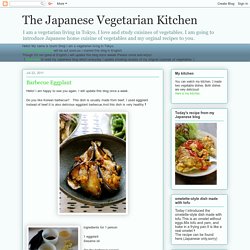 I am happy to see you again. I will update this blog once a week. Do you like Korean barbecue? This dish is usually made ​​from beef, I used eggplant instead of beef.It is also delicious eggplant barbecue.And this dish is very healthy！ Untitled. Barbara Kafka's Marinated Eggplant Recipe on Food52. Aubergines à la Bonifacienne (Eggplant Bonifacio) – Stefan's Gourmet Blog. Bonifacio is the most beautiful town on the French island of Corsica in the Mediterranean. 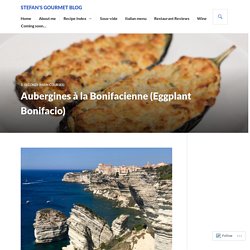 It is magnificently situated on a promontory of the limestone coast of southern Corsica. We were there about a month ago, and everywhere you looked restaurants were offering aubergines à la Bonifacienne. This is the local way to prepare eggplant: the eggplant is boiled, the flesh is scooped out and mixed with soaked bread, eggs, garlic, basil, and cheese. This mixture is stuffed back into the skin, and it is then fried in olive oil on both sides. My version is lighter, as I baked it in the oven instead. Of course the best cheese for this is sheep’s milk cheese from Corsica like tomme de corse or brocciu passu. Ingredients For 2 servings as a main course 2 eggplants, about 700 grams (1.5 lbs) 70 grams (2.5 oz) stale white bread without crust about 250 ml (1 cup) milk (or water) 70 grams (2.5 oz) grated sheep’s milk cheese (preferably tomme de corse) 1 Tbsp finely sliced basil.

GRILLED EGGPLANT WITH HERBED QUINOA. Entrée, Side, Gluten Free, Summer Hugh Forte · I'm not even sure where to start with the sentiments on this one, because the past week or two has sort of taken me under. 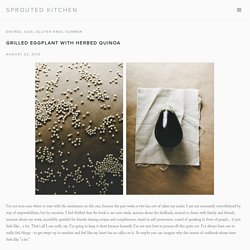 I am not necessarily overwhelmed by way of responsibilities, but by emotion. How to Make Eggplant Caponata. Purple reign: Yotam Ottolenghi’s aubergine recipes. I am feeling stupidly nostalgic this week, because it’s 10 years since I started writing my Weekend column, and next week will be my 500th in total. 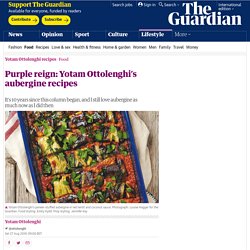 Eggplant and Bell Pepper Caponata [Vegan] Caponata, a vegetable dish consisting of eggplant and bell peppers, is really easy to make considering that you have just to chop everything up, add it to the pot in steps, and let it cook. 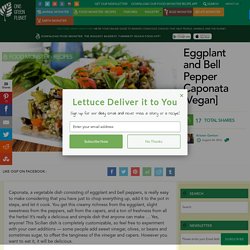 You get this creamy richness from the eggplant, slight sweetness from the peppers, salt from the capers, and a ton of freshness from all the herbs! It’s really a delicious and simple dish that anyone can make … Yes, anyone! This Sicilian dish is completely customizable, so feel free to experiment with your own additions — some people add sweet vinegar, olives, or beans and sometimes sugar, to offset the tanginess of the vinegar and capers. Grace Young's Stir-Fried Garlic Eggplant with Pork Recipe on Food52. Cooking is more fun with friends. 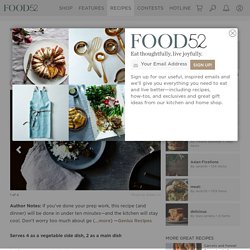 Find your friends who are already on Food52, and invite others who aren't to join. Let's GoLearn more Join Our Community. The Japanese Vegetarian Kitchen: Barbecue Eggplant. How To Make Slow-Cooker Caponata — Cooking Lessons from The Kitchn. (Image credit: Christine Han) Caponata is a Sicilian eggplant relish made with celery, onion, and tomatoes cooked into a sweet and sour sauce and served with bread as an appetizer. 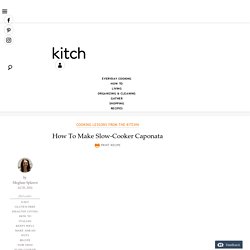 Some versions have olives or capers, others call for raisins or zucchini, and some even use hot peppers or anchovies. Neapolitan Eggplant Parmesan Recipe : Robin Miller. How To Make Eggplant Bacon — Cooking Lessons from The Kitchn. (Image credit: Maria Midoes) Eggplant is a nightshade often used as a substitute for meat in a number of dishes — from bolognese to burgers — so it only seems natural that we try our hand at transforming it into bacon. The web is littered with recipes for baking eggplant in the oven in attempts to pass it off as a pork replacement, but this eggplant bacon is different. We're taking eggplant back to the skillet, seasoning it for bacon success, and frying it up — just like the real stuff. Picking and Prepping Eggplant.

How to Grill Vegetables and Mushrooms. Mushrooms are not vegetables. Brain explosion time: they’re not even plants! WTF are they? They’re fungi, which is why we call them fungi. They’re often grouped with veggies, probably because nobody likes to think about eating fungi. Anyway, they taste amazing. Mushrooms with larger caps—portobellos, cremini—are some of the most popular options for the grill. Begin by hitting mushrooms with a little flavored oil, such as chili oil or some good olive oil—they just soak the flavor right up.

Charcoal: Create a hill of coals (see Corn on the Cob section for directions). Gas: Heat grill on medium-high. Try it: For a delicious steak alternative, serve a grilled portabello dressed in simple homemade chili oil. Nick Stellino - Roasted Eggplants in Balsamic Vinegar. Ingredients: 1 large eggplant, cut in 1/2-inch thick slices 1/2 teaspoon salt 1/3 cup + 8 tablespoons olive oil 1/4 teaspoon pepper 2 tablespoons chopped fresh basil 2 tablespoons chopped fresh mint 8 tablespoons balsamic vinegar Serves 4Printable VersionPreheat the oven to 425 F. Sprinkle the eggplant slices with 1/4 teaspoon of the salt and place them in a colander to drain for 20 minutes. Pat them with a paper towel until thoroughly dry. Line the bottom of two large baking sheets with parchment paper Brush the eggplant slices lightly on both sides with 1/3 cup of the olive oil and bake in the hot oven for 10 minutes.

How to make truly excellent caponata. Stock your fridge with caponata, your new favorite condiment. Caponata, the color, is a dark chocolate with purple undertones. It creates a “lush atmosphere,” according to paint producer Benjamin Moore, when applied to fireplace, base molding or soffit. In other words, it’s intense. Use sparingly. The same goes for caponata, the condiment — though there’s no chocolate involved. Makes about 6 cups. Egg Plant Parmesan - Thinking Outside the Pot. Years ago I was in Denver with my husband and a friend at this great Greek buffet. It wasn’t anything special, but that was the first time I ever had egg plant. I had the Egg Plant Parmesan, and loved it ever since then. Egg plant to me doesn’t really have a taste to it. Grilled Ratatouille. Greek stuffed Eggplant recipe (Melitzanes Papoutsakia) Delicious Vegetarian Moussaka Recipe with Mushroom Sauce. Pasta and Noodles: Eggplant Rollatini.

Ainsley Harriott pomegranate with aubergine recipe on Ainsley Harriott’s Street Food in Jordan. RECIPE: Miso-Glazed Eggplant (Nasu Miso) Garden to Table- Eggplant - Divina Cucina. When summer hits, we are also hit with a glut of vegetables from the garden. Actually not MY garden. We learned that we just cannot keep up with raising and eating as much as a few plants produce and we don’t have a big freezer or a lot of storage space for jars. I buy once or twice a week from my local farmer who only sells what she grows and sometimes walk by the community gardens and if i run into my friend Gianbattista, he always gives me something.

He always takes us on a tour of the gardens, showing with pride all his plants in the orto. Then he will go and harvest something for us to take home, the last time there was a nice round violet eggplant. Not only did we score for the vegetables,but he gave me a recipe for an stuffed eggplant. Melanzane Ripiene- Stuffed Eggplant 1 round violet eggplant sliced ham sliced cheese 1 egg 1/2 cup breadcrumbs or more. salt Slice the eggplant. Place ham and cheese slices inside, do not let them go beyond the edge of the eggplant. Share the love!!