Mediterranean Chickpea Chopped Salad with Quinoa and Avocado. Creamy Pumpkin Quinoa Risotto. I get all twitter-pated over pumpkin each fall. 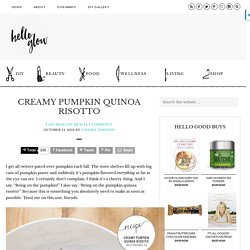 The store shelves fill up with big cans of pumpkin puree and suddenly it’s pumpkin flavored everything as far as the eye can see. I certainly don’t complain. I think it’s a cheery thing. And I say, “Bring on the pumpkin!” Sesame Ginger Kale and Quinoa Salad Recipe. I'm a sucker for any salad that includes the powerhouse duo kale and quinoa. 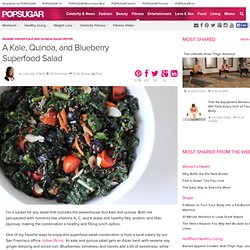 Both are jam-packed with nutrients like vitamins A, C, and K (kale) and healthy fats, protein, and fiber (quinoa), making the combination a healthy and filling lunch option. One of my favorite ways to enjoy this superfood salad combination is from a local eatery by our San Francisco office, Urban Picnic. Quinoa Lentil Pilaf With Roasted Cauliflower, Pistachios and Cranberries. There’s still time for winter comfort food! 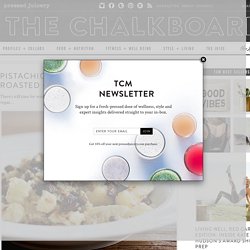 Try this one dish wonder that is both gluten-free and vegan… This vegan, gluten-free recipe from holistic nutrition counselor, Elizabeth Stein is unbeatable. Talk about whole food cooking, this recipe manages to squeeze atremendous amount of protein, vitamins, fiber and minerals into one dish that completely satisfies. We’re not surprised to see a recipe like this from Elizabeth who is also the founder of Purely Elizabeth, a line of organic, gluten-free granola, oatmeal and baking mixes that leave little to be missed. Meatless Monday: Grain Power Salad. When we take a trip to Vegas, health is usually the last thing on our mind. 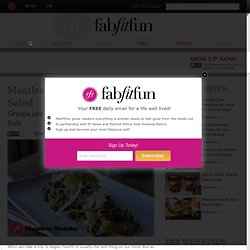 But as we’ve learned, what happens in Vegas doesn’t always stay in Vegas — and we often come back with a few less bucks in our pocket, and a few more pounds on our hips. So we went on a search for a healthy alternative in Sin City, and found our newest Las Vegas obsession: Honey Salt! This farm to table-inspired restaurant features amazing regionally-grown ingredients, healthy options, and fresh and innovative fare. Finding that you’re dragging around lunchtime? Quinoa Salad with Arugula and Grapes, from Clean Plates Cookbook. Grilled/roasted fennel + quinoa crunch salad. Rather recently, I was talking to the man in my life about how my day went, happenings, weather… you know, small talk. 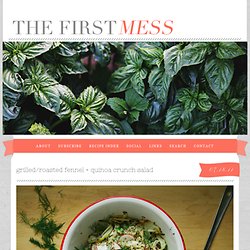 Then he said something big, my idea of big anyway. He had bought himself some organic quinoa at Costco. This is awesome because A) he independently thought it would be cool to have some super grain kicking around and B) uuum, did you see A? Suffice to say, I was rather pleased at this development and set out to make a little salad with some strong and fresh flavours that he could get into. Mushroom and Apple Quinoa. With the October sun setting painfully earlier than it used to and only a thirty minute window to make dinner and snap a few photos before dark, I was on mission. 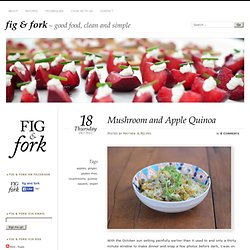 Abby listed off some ingredients she had been craving…pregnantly craving: apples, squash and mushrooms. I figured she had been planning a little, since we had all three in our house. I decided to test my ability to make this a one pot meal. I started cooking the hard squash first and added the remaining ingredients in a particular order so as not to turn it all to mush. 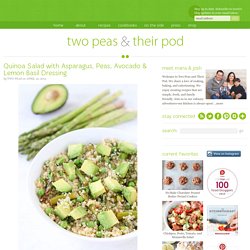 I think it is, but mother nature is telling me otherwise. Summer in a Bowl: Warm Veggie Quinoa Salad — Kitchen Hoopla. Quinoa and Zucchini Stuffed Peppers - Naturally Ella. As promised, a recipe. 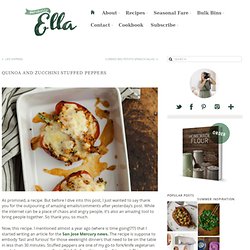 But before I dive into this post, I just wanted to say thank you for the outpouring of amazing emails/comments after yesterday’s post. While the internet can be a place of chaos and angry people, it’s also an amazing tool to bring people together. So thank you, so much. Moroccan spiced quinoa, buckwheat and eggplant salad. Yesterday was a perfect Saturday - I went for an early morning swim in the near-by ocean pool, had a light breakfast after that and then headed off to hatha yoga for 2 hours. 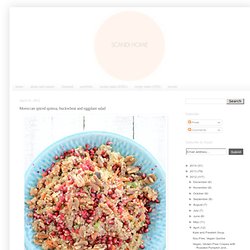 It was a low-energy but strong class and I felt utterly inspired and energised afterwards, which was exactly what I wanted! I was expecting a friend for a long lunch, so I prepared a couple of big salads that would keep us going while we catch up on all things in life. This salad has its base on quinoa and buckwheat but there is so much more to it than just that - tahini-flavoured eggplant, carrot for colour, spices like cumin, coriander and cinnamon for warmth, dried apricots for sweetness and beautiful pomegranate arils and toasted walnuts to give it a nice finish.

This dish is full of flavour and different textures and it certainly gave my friend and I sustenance to keep talking for 6 hours! Sweet Potato and Quinoa Salad with Soft-Boiled Eggs. I walked into my kitchen with one goal in mind: make a hearty salad without having to go to the store. 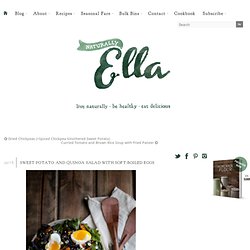 I still on occasion walk into my kitchen and feel ho-hum, as if all the ingredients I have can’t make one decent meal. I used to be horrible about this and that would often lead to me convincing M to order food (but, I’d do it in a way that seemed like he came up with the idea to order food so I didn’t feel guilty about not tackling something in the kitchen). I knew I wanted a salad. I bought lettuce at the store (my first time since March- I get so spoiled with the CSA) with the goal of making a big salad. I needed some color in my life. One Pot Kale and Quinoa Pilaf recipe on Food52.com.

Minted Red Quinoa, Fava Bean and Cashew Salad. Although I always keep lots of dried fava beans on hand for making falafel, I rarely buy them fresh, simply because they usually aren't available at Whole Foods. However, this past weekend, I spotted a ton of these dull green pods, so I scooped up plenty of them. Once I brought them home, I broke open their double layer of tough outer husks to reveal the small and vibrant green-colored beans inside. I gave them a quick boil and saute in Earth Balance and garlic, then combined them into a salad with tons of fresh mint, red quinoa and raw cashews.

Toasted quinoa bowl. When it comes to eating, I’m a pretty lazy person. I don’t make fancy meals, ever. And I’d eat a plate of raw fruits and vegetables every night if I wasn’t trying to maintain my abdominal muscles (contrary to popular belief, they require significantly more than a plate of produce). Anyhow, this meal reminds me of a healthier version of a burrito bowl. And although I’d choose an Illegal Pete’s burrito bowl to most meals, any day – you really cannot beat this toasted quinoa bowl. It’s loaded with good-for-you vitamins and minerals, and takes 30 minutes to prepare; most of which are spent waiting for the tempeh and quinoa to cook. Grilled/roasted fennel + quinoa crunch salad.

Notes Nutrition information per serving: 80 calories; 45 calories from fat (56 percent of total calories); 5 g fat (0.5 g saturated; 0 g trans fats); 0 mg cholesterol; 8 g carbohydrate; 2 g fiber; 1 g sugar; 2 g protein; 105 mg sodium. Marinated Mushrooms and Asparagus Salad. Mushrooms get a bad rap, but I take them seriously. They aren’t just some white sponge on a salad buffet. They aren’t just some blown out topping on a pizza either. They are the first thing I was ever allowed to cut and cook in my mother’s kitchen, where I learned it’s about browning without burning them. It’s about adding the garlic at the perfect time so they marinate in the scent of it. It’s about seasoning them while they’re still hot so the salt absorbs into the flesh.

So why the turnip in this recipe? Honestly, I just had one and said why not. Thanks to the early spring in Minnesota, I was able to run outside in the rain and snip chives from Abby’s garden for this dish. This is a great side dish or will be perfect heated up under grilled anything! Marinated Mushrooms and Asparagus Salad {gluten-free, vegan} Serves 6 as a side dish Fill a large pot of water for blanching and bring to a boil. Blanch the asparagus in the boiling salted water for two minutes.

Raw Kale Salad with Pineapple and Tahini. I sit at the bottom of the bell curve for bone density. Lemon Quinoa with Ricotta and Peas. I’m guilty of being an imposter. While Matthew was busy creating healthy masterpieces in our kitchen, I was in the other room trying not to imagine what kale tastes like. He represented Fig & Fork by posting recipes while I napped, ate bowls of cereal and cursed Dairy Queen for being painfully close to our house. I could almost see the red sign taunting me from my spot on the couch.

Needless to say, pregnancy has been a learning experience for the both of us. Warm Quinoa Salad with 3-Herb Green Sauce. My weekend consisted of about 20+ hours cooking, baking, styling, and shooting cookbook recipes. It was intense, but luckily I always seem to have a lot of fun when there’s food involved. I managed to cap off the weekend by gouging my middle finger with a processor blade. Middle finger indeed. Seasonal Chef: Who's Got Thyme for Tasty Quinoa Burgers? - Small Bites. 1 Pot of Quinoa, 5 Dinners. Black Bean and Barley Salad Recipe – The Lemon Bowl. Baked Quinoa Burgers. Kicking off my first post. Quinoa Salad with Hazelnuts, Apple and Dried Cranberries recipe from Food52. Kale and Sweet Potato Brown Rice Bowl.