LSD-Tripping Brains Reveal How the Drug Causes the Psychedelic Experience. It’s no secret that LSD causes vivid hallucinations, altered states of consciousness, one-ness with the universe, and a host of other psychedelic effects. 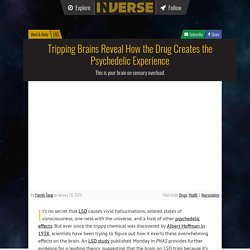 But ever since the trippy chemical was discovered by Albert Hoffman in 1938, scientists have been trying to figure out how it exerts these overwhelming effects on the brain. An LSD study published Monday in PNAS provides further evidence for a leading theory, suggesting that the brain on LSD trips because it’s experiencing sensory overload.

Spatial and Temporal Organization of the Individual Human Cerebellum: Neuron. NPR Choice page. Neurons ripple while brains rest to lock in memories. Memories resonate in the mind even when it's not aware of processing them. 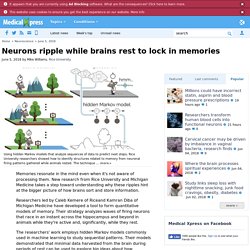 New research from Rice University and Michigan Medicine takes a step toward understanding why these ripples hint at the bigger picture of how brains sort and store information. Researchers led by Caleb Kemere of Riceand Kamran Diba of Michigan Medicine have developed a tool to form quantitative models of memory. Their strategy analyzes waves of firing neurons that race in an instant across the hippocampus and beyond in animals while they're active and, significantly, while they rest. The researchers' work employs hidden Markov models commonly used in machine learning to study sequential patterns.

Quantifying Social Networks and Cognition in Neurology. Bradford Dickerson, MD When a 13-lb iron rod exploded out of a roadbed construction site and through the skull and brain of foreman Phineas Gage in 1848, it ignited a new interest in social cognitive neuroscience. 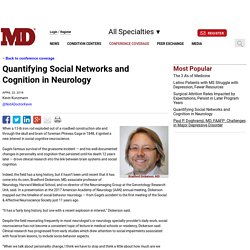 Gage’s famous survival of the gruesome incident — and his well-documented changes in personality and cognition that persisted until his death 12 years later — drove clinical research into the link between brain systems and social cognition. Indeed, the field has a long history, but it hasn’t been until recent that it has come into its own, Bradford Dickerson, MD, associate professor of Neurology, Harvard Medical School, and co-director of the Neuroimaging Group at the Gerontology Research Unit, said.

Untitled. The Internet and your brain are more alike than you think - Salk Institute for Biological Studies. Salk scientist finds similar rule governing traffic flow in engineered and biological systems. 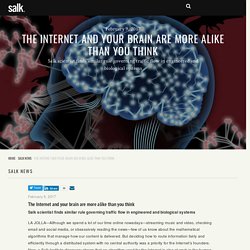 Forgetting Can Make You Smarter - Neuroscience News. Summary: Researchers say the goal of memory is not to transmit the most accurate information over time, but to optimize intelligent decision making by holding on to valuable information. 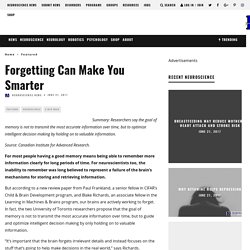 Source: Canadian Institute for Advanced Research. Womb zoom: What advances in fetal and newborn imaging have revealed : Nature Medicine. Moriah Thomason A keg-sized magnetic resonance imaging machine tucked into a corner of a neonatal-care unit in the maternity wing of the Royal Hallamshire Hospital in Sheffield, UK, is the smallest of its kind in the world. 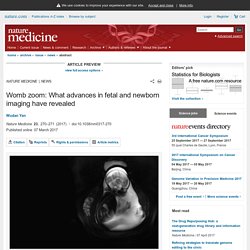 Since engineers put the final touches on this prototype more than a year ago, doctors have thus far used it to captu… How the brain recognizes faces. MIT researchers and their colleagues have developed a new computational model of the human brain’s face-recognition mechanism that seems to capture aspects of human neurology that previous models have missed. 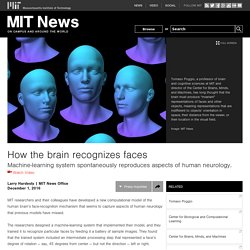 The researchers designed a machine-learning system that implemented their model, and they trained it to recognize particular faces by feeding it a battery of sample images. They found that the trained system included an intermediate processing step that represented a face’s degree of rotation — say, 45 degrees from center — but not the direction — left or right. This property wasn’t built into the system; it emerged spontaneously from the training process. But it duplicates an experimentally observed feature of the primate face-processing mechanism.

The researchers consider this an indication that their system and the brain are doing something similar. Brain Activity Can Be Used to Predict Reading Success up to 2 Years in Advance - Neuroscience News. Summary: Researchers study event related potentials to help predict children’s reading levels in years to come. 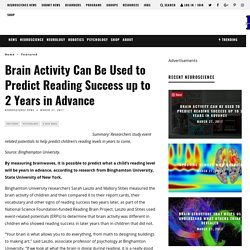 Source: Binghampton University. By measuring brainwaves, it is possible to predict what a child’s reading level will be years in advance, according to research from Binghamton University, State University of New York. Binghamton University researchers Sarah Laszlo and Mallory Stites measured the brain activity of children and then compared it to their report cards, their vocabulary and other signs of reading success two years later, as part of the National Science Foundation-funded Reading Brain Project. 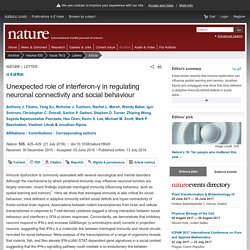 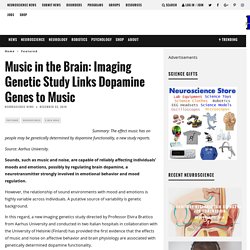 Source: Aarhus University. Sounds, such as music and noise, are capable of reliably affecting individuals’ moods and emotions, possibly by regulating brain dopamine, a neurotransmitter strongly involved in emotional behavior and mood regulation. However, the relationship of sound environments with mood and emotions is highly variable across individuals. A putative source of variability is genetic background. Music in the Brain: Imaging Genetic Study Links Dopamine Genes to Music – Neuroscience News. A dendritic disinhibitory circuit mechanism for pathway-specific gating : Nature Communications.

All models A summary of all types of models used and where they are used can be found in Supplementary Table 2. Spiking pyramidal neuron models For the fully reconstructed multi-compartmental pyramidal neuron model (Supplementary Fig. 1a–d), we adapted a previously developed model based on a layer 2/3 pyramidal neuron in the rat somatosensory cortex reported by Branco et al.52. We used the passive membrane parameter set; results are essentially the same with the active membrane parameter set. Simulations were implemented with the NEURON simulator53. Brain connections are more sophisticated than thought. DURHAM, N.C. -- In 1959, a scientist named Edward Gray showed that the miniscule gaps between neurons where chemical messages are sent, called synapses, come in two main varieties, which researchers later dubbed "excitatory" and "inhibitory.

" Inhibitory synapses act as the brakes in the brain, preventing it from becoming overexcited. Researchers thought they were less sophisticated than their excitatory counterparts because relatively few proteins were known to exist at these structures. But a new study by Duke University scientists, published Sept. 9 in Science, overturns that assumption, uncovering 140 proteins that have never been mapped to inhibitory synapses. EEG recordings prove learning foreign languages can sharpen our minds.

Scientists from the Higher School of Economics (HSE) together with colleagues from the University of Helsinki have discovered that learning foreign languages enhances the our brain's elasticity and its ability to code information. The more foreign languages we learn, the more effectively our brain reacts and processes the data accumulated in the course of learning. An article of Yury Shtyrov, Leading Research Fellow of the HSE Centre for Cognition & Decision Making, Lilli Kimppa and Teija Kujala (University of Helsinki) summarizing the new findings has been recently published in Scientific Reports.

According to the study, the neurophysiological mechanics of language and speech acquisition are underexplored when compared to the brain's other functions. The reason for such scarce attention is the inability to study verbal function on test animals. Scientists have identified a part of the brain responsible for the placebo effect. Scientists think they've located a region of the brain that's linked to the placebo effect - a psychological phenomenon where patients feel better because they think they've been given real drugs, when in fact all they've been given is sugar pills. The findings could not only help researchers identify those who are more likely to experience a placebo effect - it could also lead to more personalised treatments for those suffering from chronic pain, giving scientists a new way to tailor drugs to particular brain types.

One of the most fascinating properties of the mammalian brain is its capacity to change throughout life. Experiences, whether studying for a test or experiencing a traumatic situation, alter our brains by modifying the activity and organization of specific neural circuitry, thereby modifying subsequent feelings, thoughts, and behavior. Study identifies neural circuits involved in making risky decisions.

Since the 1970s, U.S. doctors have prescribed lithium to treat patients with bipolar disorder. While the drug has a good success rate, scientists are still unsure exactly how it achieves its beneficial effects. Researchers pinpoint neurons that tell the brain when to stop drinking - Vital Record. Report: A host of common chemicals endanger child brain development. Seasonal Allergies Could Change Your Brain – Neuroscience News. Summary: A new study reports mice who were exposed to allergens produced new hippocampal neurons during allergic reactions. Invisible Wounds of War Now Able to be Seen – Neuroscience News. Scientists unpack how Toxoplasma infection is linked to neurodegenerative disease: New research focused on glutamate, the most important neurotransmitter in the brain. How Did Consciousness Evolve? Ever since Charles Darwin published On the Origin of Species in 1859, evolution has been the grand unifying theory of biology.

Yet one of our most important biological traits, consciousness, is rarely studied in the context of evolution. Jan 19, 2016: Academy Honors Six for Major Contributions in Neuroscience, Psychological and Cognitive Sciences. GetSharedSiteSession?rc=4&redirect= Brain Connections May Cause Blurring Sense Of Self With LSD. New Understanding and Hope for Children on the Autism Spectrum: Based in Brain and Movement Sciences. Immune Cells Key to Maintaining Blood-Brain Barrier – Neuroscience News.