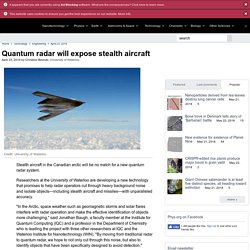 Researchers at the University of Waterloo are developing a new technology that promises to help radar operators cut through heavy background noise and isolate objects—including stealth aircraft and missiles—with unparalleled accuracy. Why Marx's Philosophy But Not His Economics Matters Now. Interview by Richard Marshall. 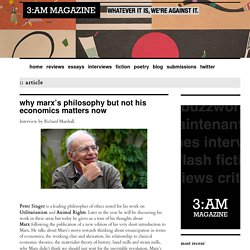 Peter Singer is a leading philosopher of ethics noted for his work on Utilitarianism and Animal Rights. Later in the year he will be discussing his work in these areas but today he gives us a tour of his thoughts about Marx following the publication of a new edition of his very short introduction to Marx. He talks about Marx’s move towards thinking about emancipation in terms of economics, the working class and alienation, his relationship to classical economic theories, the materialist theory of history, hand mills and steam mills, why Marx didn’t think we should just wait for the inevitable revolution, Marx’s critique of capitalism, what the obsolete Marxist societies in the near past tell us about Marx’s ideas, what contemporary China tells us, Piketty, Globalisation, the environment, Utilitarianism and what is and isn’t relevant in Marx for us today. 3:AM: What made you become a philosopher?

Peter Singer: It was more or less an accident. R. Researchers find the chemical secret to recapturing the youthful brain - latimes.com#.UTi7O4BtRBY.reddit. The teenage brain is a master of reinvention, and researchers have begun… (Wes Bausmith ) Adults (especially parents) often find fault with the teenage brain. 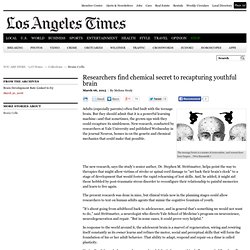 But they should admit that it is a powerful learning machine--and that sometimes, the grown-ups wish they could recapture its nimbleness. New research, conducted by researchers at Yale University and published Wednesday in the journal Neuron, homes in on the genetic and chemical mechanics that could make that possible. The new research, says the study's senior author, Dr. Stephen M. The present research was done in mice, but clinical trials now in the planning stages could allow researchers to test on human adults agents that mimic the cognitive fountain of youth. Your ancestry may be your destiny. Toronto has no social classes/Only the Masseys and the masses. – B.K. 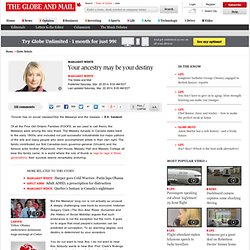 Sandwell Of all the Fine Old Ontario Families (FOOFS, as we used to call them), the Masseys were among the very finest. The Massey dynasty in Canada dates back to the early 1800s, and included not just successful industrialists but major patrons of the arts and many people who were accomplished artists in their own right. The family contributed our first Canadian-born governor-general (Vincent) and his famous actor brother (Raymond). Hart House, Massey Hall and Massey College all bear the family name. But the Masseys’ long run is not actually so unusual. You do not want to hear this. The hidden costs of the modern family. If you’re a parent, then maybe this sounds familiar: The alarm bleats. 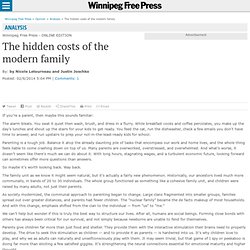 You swat it quiet then wash, brush, and dress in a flurry. While breakfast cooks and coffee percolates, you make up the day’s lunches and shout up the stairs for your kids to get ready. You feed the cat, run the dishwasher, check a few emails you don’t have time to answer, and run upstairs to prep your not-in-the-least-ready kids for school. Parenting is a tough job.

So maybe it’s worth looking back. The family unit as we know it might seem natural, but it’s actually a fairly new phenomenon. The Rise Of Emergent Networks – Part 2 of 2. “Sometimes the situation is only a problem because it is looked at in a certain way. 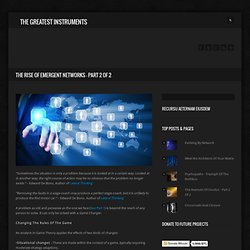 Looked at in another way, the right course of action may be so obvious that the problem no longer exists.” – Edward De Bono, Author of Lateral Thinking “Removing the faults in a stage-coach may produce a perfect stage-coach, but it is unlikely to produce the first motor car.” – Edward De Bono, Author of Lateral Thinking A problem as old and pervasive as the one we face (See Part 1) is beyond the reach of any person to solve. It can only be solved with a Game Changer. 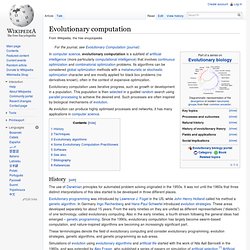 Its algorithms can be considered global optimization methods with a metaheuristic or stochastic optimization character and are mostly applied for black box problems (no derivatives known), often in the context of expensive optimization. Evolutionary computation uses iterative progress, such as growth or development in a population. This population is then selected in a guided random search using parallel processing to achieve the desired end. Such processes are often inspired by biological mechanisms of evolution. As evolution can produce highly optimised processes and networks, it has many applications in computer science. History[edit] The use of Darwinian principles for automated problem solving originated in the 1950s.

How The Universe Works