Earth - If you think penguins are cute and cuddly, you're wrong. Reputation: Penguins only live in icy regions near the poles. 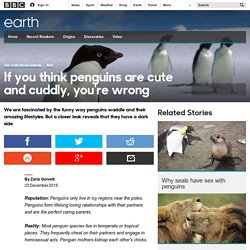 Penguins form lifelong loving relationships with their partners and are the perfect caring parents. Reality: Most penguin species live in temperate or tropical places. They frequently cheat on their partners and engage in homosexual acts. Penguin mothers kidnap each other's chicks. In 1911, the English explorer Captain Robert Scott sent three men from his Antarctic base on a mission: to collect three emperor penguin eggs. Early explorers thought penguins were fish. Five things that are wrong with the world's best country. Image copyright AFP/Getty Images Norway is a nice place to live. 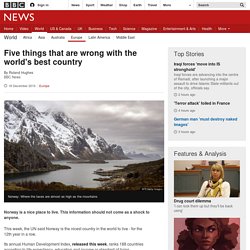 This information should not come as a shock to anyone. This week, the UN said Norway is the nicest country in the world to live - for the 12th year in a row. Its annual Human Development Index, released this week, ranks 188 countries according to life expectancy, education and income or standard of living. 7 stereotypes about British people that everyone believes. Do you love tea, enjoy polite queuing and take an umbrella everywhere you go? 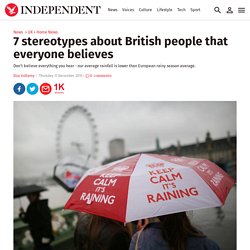 Probably, but that's not the point. Many Brits experience frustration at the number of stereotypes that people enforce on them. And just like most stereotypes they are usually harmless – and often untrue. In response to a question posted on Quora, Britons have listed the most common and unfounded examples: UK Bank Holidays: 5 Things You Did Not Know. What is a bank holiday in The UK? 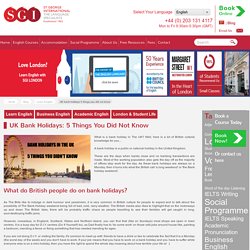 Well, here is a bit of British cultural knowledge for you... A bank holiday is a public or national holiday in the United Kingdom. These are the days when banks close and no banking transactions are made. Travel - Destinations that are so magical, they hardly seem real. Where to go to escape the stresses of life, the bustle of the workweek and the noise of traffic? 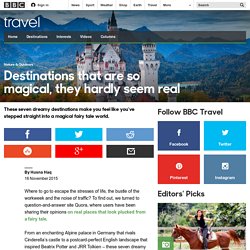 To find out, we turned to question-and-answer site Quora, where users have been sharing their opinions on real places that look plucked from a fairy tale. From an enchanting Alpine palace in Germany that rivals Cinderella’s castle to a postcard-perfect English landscape that inspired Beatrix Potter and JRR Tolkien – these seven dreamy destinations are so magical, it’s hard to believe they’re real. A giant patchwork quilt of kaleidoscopic colour Holland’s stunning tulip fields, with their broad stripes of vibrant blues, reds, pinks and yellows, “look like the artwork in a children's book”, wrote Quora user Rahul Shankar.

Where are the most beautiful schools? A little known secret to the Danes' happiness. Plenty of theories abound about why the Danes are always near the top of happiness surveys, but The Local's opinion columnist Jessica Alexander may have a new one. 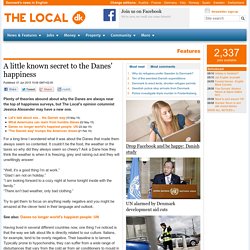 For a long time I wondered what it was about the Danes that made them always seem so contented. It couldn’t be the food, the weather or the taxes so why did they always seem so cheery? Ask a Dane how they think the weather is when it is freezing, grey and raining out and they will unwittingly answer: “Well, it’s a good thing I’m at work.” “Glad I am not on holiday.” “I am looking forward to a cozy night at home tonight inside with the family.” “There isn’t bad weather, only bad clothing.” Drop Facebook and be happy: Danish study. The study found that people who took a Facebook break felt happier and were less sad and lonely. 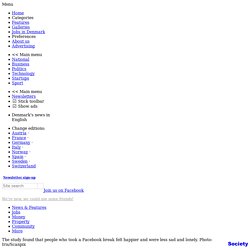 Photo: Iris/Scanpix The Copenhagen-based Happiness Research Institute has a simple formula for increasing your happiness, social activity and concentration, but it might not be something you’re willing to do. Checking Facebook gives us instant gratification in the form of new likes and friend requests and provides a virtual one-stop shop for keeping up with the people we care about and the news we’re interested in. A Russian student abroad: Bridging the communication gap. I spent eight months at Sussex University studying Media and Communications and then began studying journalism at Moscow State University (MSU). 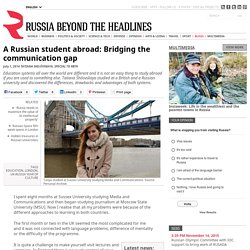 Now I realise that all my problems were because of the different approaches to learning in both countries. The first month or two in the UK seemed the most complicated for me and it was not connected with language problems, difference of mentality or the difficulty of the programme. It is quite a challenge to make yourself visit lectures and seminars. In England there is no such control of your studies as in Russia. London is living in a world of possibilities. Aliya Sayakhova Occupation: Research Assistant at GRAD: Gallery for Russian Arts and Design City of origin: Moscow From Russia to Britain: I originally came here to do my MA at the University of Warwick, and also got to spend some time in Paris and London. 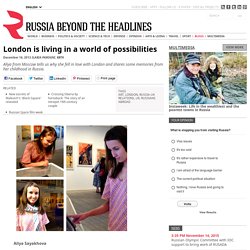 Part of my MA was actually based in the Wallace Collection building, which houses an amazing selection of French and European art, right in central London - it was great to go there every day and be surrounded by those beautiful art pieces. A Russian student lives British reality. Prejudices The first things you have to handle in a foreign country if you are Russian are the prejudices. 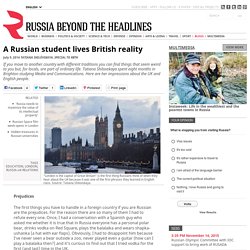 For the reason there are so many of them I had to refute every one. Once, I had a conversation with a Spanish guy who asked me whether it is true that in Russia everyone has a personal polar bear, drinks vodka on Red Square, plays the balalaika and wears shapka-ushanka (a hat with ear flaps). Obviously, I had to disappoint him because I’ve never seen a bear outside a zoo, never played even a guitar (how can I play a balalaika then?) 10 photos along with 10 reasons to stay in St. Petersburg forever.

St. Petersburg: why fall in love with the city? Scroll down to see more Anton Malkov Elena Bobrova, RBTH author and St. Travel - Nordstjernan. The Better Life Index puts Sweden as the second happiest nation on earth. According to the Better Life Index, compiled by the Organization for Economic Co-operation and Development, Australia is the happiest nation among developed economies for the third year in a row. The second happiest country is Sweden, then Canada, followed by Norway, Switzerland, and the US. The Better Life Index has 11 categories (housing, income, jobs, community, education, environment, civic engagement, health, life satisfaction, safety, and work-life balance), and of those Sweden has the highest ranking in environment, and the lowest ranking in safety.

Swedish households have higher incomes than average among the 24 countries. Why Brits and Americans Spell Differently. Siobhan Thompson (Photo: YouTube) Why did America ax the “U” from certain British words like “honour” and “labour”? Who Was Guy Fawkes? Guy Fawkes masks. (Photo: Fotolia) Remember, remember the 5th of November: Guy Fawkes is one of Britain’s most infamous figures, and, every November 5, Britain celebrates the foiling of this terrorist’s 17th century Gunpowder Plot with an annual night of carousing, fireworks, and family-friendly fun.

Who’s the man behind the mask made famous in Alan Moore and David Lloyd‘s V For Vendetta? Siobhan Thompson explains in this episode of the Anglophenia YouTube series. Norway the most prosperous country in the world. Danes no longer world's best English speakers. Danes still have plenty to be proud of when it comes to their English skills. West Iceland Tops Lonely Planet List. Iceland from the Air - VIDEO. Tourists visited Iceland this past March and recorded this epic footage with a DJI Phantom Aerial UAV Drone Quadcopter with GoPro Hero 3 Black. Humans of Reykjavík - VIDEO. Humans of Reykjavik captures portraits of the people who give life, culture and personality to the city. Everyone around us has a unique story to tell. TEN important things when planning a winter visit to Iceland. Are you planning to visit Iceland during winter? Iceland has so much to offer during the winter season, for example nothern lights, ice caving, glacier hiking, super jeep tours, geothermal pools and much more.

The Icelandic Passport is the Eighth Best in the World. How powerful is the Icelandic passport? How Powerful Is Your Passport? More Swedes go abroad to escape daily stress. Ten phrases you'll only hear at work in Sweden. Sweden has strong gender equality in the workplace. Photo: Cecilia Larsson/Image Bank Sweden. Denmark world’s third most prosperous nation.

Walk Through a New City: Gothenburg, Sweden. My First Time In Budapest: Seeing the Best of Pest. Winged words: the language of aviation. How The Airline Industry Has Evolved In 100 Years Of Commercial Air Travel. Magna Carta 800 years on: recognition at last for ‘England’s greatest export’ Pros and Cons: Are Cell Phones On Planes Necessary? 7 Strange Questions That Help You Find Your Life Purpose. Could Concorde ever fly again? No, says British Airways. Forget French, Russian is the language of love. Learning a language – 10 things you need to know. How to survive the worst moments of learning a language.

When Did Americans Lose Their British Accents? Why Do the Brits Drive on the Left? 7 cultural concepts we don't have in the U.S. 5 Strange Things That Happen to Brits in America. Saved by song: can singing improve your language skills? Why do we forget. Ziyah Gafić: Everyday objects, tragic histories. Why is Australia so ashamed of its 'founder'? How language can affect the way we think.

English is for everybody. How the language you speak changes your view of the world - Science - News. The 5 Most Difficult Things About Learning English. 'You are not your marks!' say Indian and Chinese students. How to learn 30 languages. The lights over the sea:6 of the most spectacular lighthouses in Vladivostok. 14 Expressions with Crazy Origins that You Would Never Have Guessed. 10 amazing places to stay in Sweden. 5 language arguments you can stop having. Top 12 places to see the sea in and around St. Petersburg. 35 Reasons London In The Summer Ruins You For Life.

Encounters with Russian humour. 5 Habits You Need to Ditch to Be Successful. What the terrifying noises you hear when flying REALLY mean. Funny English interpretations from around the world. Could working long hours actually be good for you? Time for a Cuppa: Ten Facts and Figures about The British and Their Tea You May Not Know. The very French history of the word 'surveillance' 16 Ways to Improve Your Writing Skills. Great British Gardens: The Royal Botanic Gardens Kew. Contractions List: When To Use and When To Avoid. Holland is Beautiful - Home. How did English become the world’s most widely spoken language? - ESL language studies abroad. How Changing Your Reading Habits Can Transform Your Health.