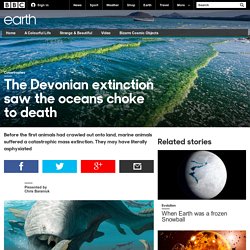 One of the largest was Dunkleosteus. This was a sea monster like no other. Dunkleosteus was a powerful fish that grew up to 10m long and was covered with thick armour. It was a predator, and had sharp bones sticking out of its jaw instead of teeth. It literally ate sharks for breakfast. You might think that this tank-like fish could withstand anything, but time was running out for Dunkleosteus.

It was one of the worst mass extinctions in Earth's history. The "age of fish" is technically called the Devonian period. They're beautiful and weird and there is nothing like that around today But while there were few land animals, the oceans were staggeringly rich in life. "It's teeming with placoderm fish and they're exquisitely preserved, in three dimensions," says Michael Coates, an evolutionary biologist at the University of Chicago in Illinois.

Earth - Where did the Moon come from? The Moon is a mystery. 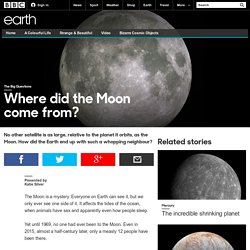 Everyone on Earth can see it, but we only ever see one side of it. It affects the tides of the ocean, when animals have sex and apparently even how people sleep. Yet until 1969, no one had ever been to the Moon. Even in 2015, almost a half-century later, only a measly 12 people have been there. Thanks to the astronauts who visited the Moon, along with the many unmanned probes that have also been, we now know a lot about the Moon's makeup.

Did it somehow get spun off from the Earth? Our ancestors couldn't get to the Moon, but that didn't stop them pondering where it came from. After the Second World War a completely different idea took hold The Italian astronomer, physicist and philosopher Galileo Galilei made an early contribution when he succeeded in making a powerful telescope that showed the Moon in far greater detail than had been possible before. In the early 1600s, Galileo showed that the Moon had a landscape similar to that of Earth. Earth - Your life on earth. Explore BBC Earth's unique interactive, personalised just to you. Find out how, since the date of your birth, your life has progressed; including how many times your heart has beaten, and how far you have travelled through space.

Investigate how the world around you has changed since you've been alive; from the amount the sea has risen, and the tectonic plates have moved, to the number of earthquakes and volcanoes that have erupted. Grasp the impact we've had on the planet in your lifetime; from how much fuel and food we've used to the species we've discovered and endangered.

And see how the BBC was there with you, capturing some of the most amazing wonders of the natural world. Explore, enjoy, and share with your friends either the whole page, or your favourite insights. This is your story, the story of your life on earth. BBC Earth's Your life on earth is based on the following sources. Lead photo credit: John Kellerman / Alamy. Get Creative - Doodling: mindless or mindful? The traits that make human beings unique. "I am become death, the destroyer of worlds. 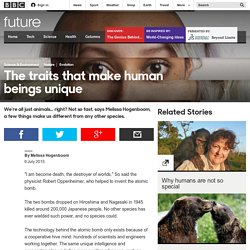 " So said the physicist Robert Oppenheimer, who helped to invent the atomic bomb. The two bombs dropped on Hiroshima and Nagasaki in 1945 killed around 200,000 Japanese people. No other species has ever wielded such power, and no species could. The technology behind the atomic bomb only exists because of a cooperative hive mind: hundreds of scientists and engineers working together. The same unique intelligence and cooperation also underlies more positive advances, such as modern medicine.

But is that all that defines us? Ever since we learned to write, we have documented how special we are. Much of what he said stills stands. We see the roots of many behaviours once considered uniquely human in our closest relatives "Obviously we have similarities. To understand these differences, a good place to start is to look at how we got here. Humans and chimpanzees diverged from our common ancestor more than six million years ago. Mind readers.