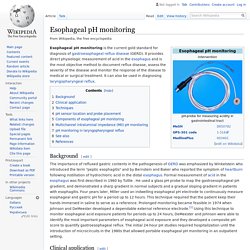 It provides direct physiologic measurement of acid in the esophagus and is the most objective method to document reflux disease, assess the severity of the disease and monitor the response of the disease to medical or surgical treatment. It can also be used in diagnosing laryngopharyngeal reflux. Background[edit] The importance of refluxed gastric contents in the pathogenesis of GERD was emphasized by Winkelstein who introduced the term "peptic esophagitis" and by Bernstein and Baker who reported the symptom of heartburn following instillation of hydrochloric acid in the distal esophagus. Formal measurement of acid in the esophagus was first described in 1960 by Tuttle . Clinical application[edit] Gastroesophageal reflux disease (GERD) is a common disease in western countries. Techniques[edit] 48 Hour Bravo pH monitoring A sample of Bravo pH tracing recorded over 48 hours. Gut and Brain connection - HPHPA urine test (Depression, Autism, Anxiety etc....)

Interesting read for anyone suffering from mental issues. 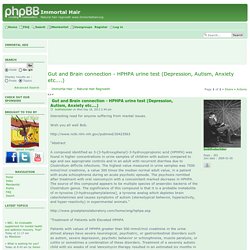 Wish you all well Bob. Science says gut health controls human behavior. (NaturalHealth365) We’ve all had those ‘gut feelings’ and sometimes make decisions based on those feelings. 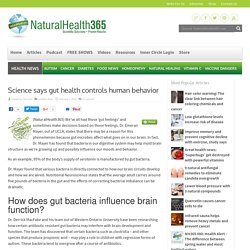 Dr. Emeran Mayer, out of UCLA, states that there may be a reason for this phenomenon because gut microbes affect what goes on in our brain. In fact, Dr. PANDAS: Strep Throat Can Trigger Obsessive Compulsive Disorder in Children. Karli Bossman was a happy 5-year-old from Clayton, N.C., who loved going to kindergarten -- until one day in 2008, the easy-going child suddenly became obsessive and defiant. 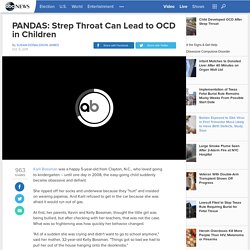 She ripped off her socks and underwear because they "hurt" and insisted on wearing pajamas. And Karli refused to get in the car because she was afraid it would run out of gas. At first, her parents, Kevin and Kelly Bossman, thought the little girl was being bullied, but after checking with her teachers, that was not the case. What was so frightening was how quickly her behavior changed. "All of a sudden she was crying and didn't want to go to school anymore," said her mother, 32-year-old Kelly Bossman.

The little girl also had an irrational fear of elevators and was scared to go to bed at night for fear she would have a bad dream. It took two years and 14 doctors to finally figure out what was wrong. Anxiety In Your Head Could Come From Your Gut. Dr. 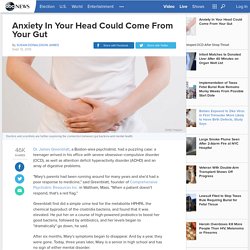 James Greenblatt, a Boston-area psychiatrist, had a puzzling case: a teenager arrived in his office with severe obsessive–compulsive disorder (OCD), as well as attention deficit hyperactivity disorder (ADHD) and an array of digestive problems. Clostridia — The Great Plains Laboratory, Inc. IMMH Registry. Articles Return to article list Usefulness of HPHPA marker in a wide range of neurological, gastrointestinal, and psychiatric disorders by William Shaw, Ph.D. 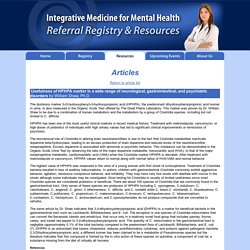 The dysbiosis marker 3-(3-hydroxyphenyl)-3-hydroxypropionic acid (HPHPA), the predominant dihydroxyphenylpropionic acid isomer in urine, is also measured in the Organic Acids Test offered by The Great Plains Laboratory. This marker was proven by Dr. William Shaw to be due to a combination of human metabolism and the metabolism by a group of Clostridia species, including but not limited to C. difficile. HPHPA has been one of the most useful clinical markers in recent medical history.

The biochemical role of Clostridia in altering brain neurotransmitters is due to the fact that Clostridia metabolites inactivate dopamine beta-hydroxylase, leading to an excess production of brain dopamine and reduced levels of the neurotransmitter norepinephrine. The same article by Dr. References. Age of Autism Science Summary: Anxiety, Sensory Over-Responsivity, and Gastrointestinal Problems in Children with Autism Spectrum Disorders. J Abnorm Child Psychol. 2012 Aug 1. 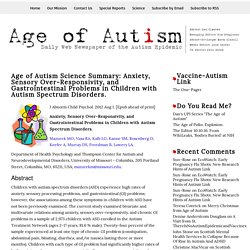 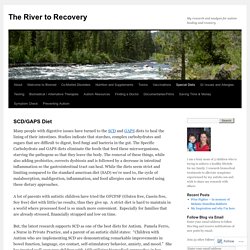 Studies indicate that starches, complex carbohydrates and sugars that are difficult to digest, feed fungi and bacteria in the gut. The Specific Carbohydrate and GAPS diets eliminate the foods that feed these microorganisms, starving the pathogens so that they leave the body. The removal of these things, while also adding probiotics, corrects dysbiosis and is followed by a decrease in intestinal inflammation so the gastrointestinal tract can heal. While the diets seem strict and limiting compared to the standard american diet (SAD) we’re used to, the cycle of malabsorption, maldigestion, inflammation, and food allergies can be corrected using these dietary approaches. A lot of parents with autistic children have tried the GFCFSF (Gluten free, Casein free, Soy free) diet with little/no results, thus they give up. Symptoms of Yeast Overgrowth 100% grape juice in a jar/bottle.