BEHIND THE BUSHES: Chronology of a family KEY WORDS: George W. Bush. 19th century CONSORTIUM NEWS - In the late 19th Century, Samuel Bush moved to Ohio from Orange, New Jersey, where he had attended the nearby Stevens Institute of Technology in Hoboken. 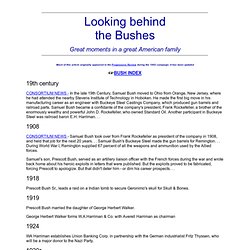 He made the first big move in his manufacturing career as an engineer with Buckeye Steel Castings Company, which produced gun barrels and railroad parts. Samuel Bush became a confidante of the company's president, Frank Rockefeller, a brother of the enormously wealthy and powerful John D. Rockefeller, who owned Standard Oil. Another participant in Buckeye Steel was railroad baron E.H.

CONSORTIUM NEWS - Samuel Bush took over from Frank Rockefeller as president of the company in 1908, and held that job for the next 20 years. . . Samuel's son, Prescott Bush, served as an artillery liaison officer with the French forces during the war and wrote back home about his heroic exploits in letters that were published. Prescott Bush Sr., leads a raid on a Indian tomb to secure Geronimo's skull for Skull & Bones. 1930s. 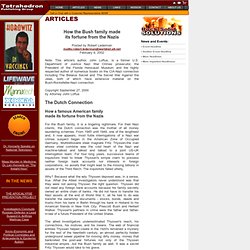 Blueprint for World Domination. I. 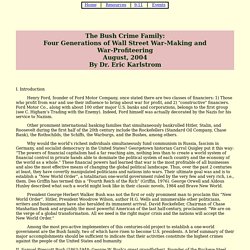 Introduction Henry Ford, founder of Ford Motor Company, once stated there are two classes of financiers: 1) Those who profit from war and use their influence to bring about war for profit, and 2) “constructive” financiers. Ford Motor Co., along with about 100 other major U.S. banks and corporations, belongs to the first group (see C. Higham’s Trading with the Enemy). Indeed, Ford himself was actually decorated by the Nazis for his service to Nazism. The Bush Crime Family And Their Destruction Of America.

Maze in a Mirror: Is the Heart of Armageddon in Paraguay? ¿Qué Pasa? 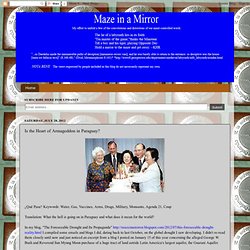 Keywords: Water, Gas, Vaccines, Arms, Drugs, Military, Monsanto, Agenda 21, Coup Translation: What the hell is going on in Paraguay and what does it mean for the world? In my blog, "The Foreseeable Drought and Its Propaganda" I compiled some emails and blogs I did, dating back to last October, on the global drought I saw developing. I didn't re-read them closely until now and just noticed an excerpt from a blog I posted on January 15 of this year concerning the alleged George W. Bush and Reverend Sun Myung Moon purchase of a huge tract of land astride Latin America's largest aquifer, the Guarani Aquifer. What attracted my notice is that the aquifer runs beneath Argentina, Brazil, and Paraguay and I sent out an email, five days ago, on a July 18, 2012 article about a supposed H1N1 flu virus outbreak in Brazil on the borders of Argentina and Paraguay.

BEAUTIFUL PARAGUAY - THE BUSH'S LIKE IT - WONDER WHY? Bush Buys Ranch in Paraguay: Planning Escape? According to Wonkette, this story is being covered by papers in Cuba, Venezuela and Argentina, but has not yet hit the American presses. 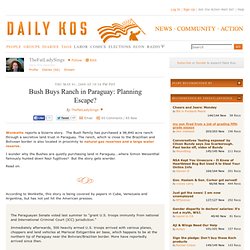 The Paraguayan Senate voted last summer to "grant U.S. troops immunity from national and International Criminal Court (ICC) jurisdiction. " Immediately afterwards, 500 heavily armed U.S. troops arrived with various planes, choppers and land vehicles at Mariscal Estigarribia air base, which happens to be at the northern tip of Paraguay near the Bolivian/Brazilian border. More have reportedly arrived since then. Perhaps our government continuity plan is to be carried out in Paraguay? Wonkette also reports that Jenna Bush has just returned from an announced ten-day secret diplomatic mission to Paraguay where she met with the President and the US Ambassador, a former military man stationed in countries such as Honduras and El Salvador where the US ran covert operations.

Sun Myung Moon also owns a huge ranch in the same neighborhood, according to Wonkette. America today parallels Nazi Germany. The resemblance of America, today, parallels that of NAZI Germany in almost every way By Tony Elliott (INTELLIHUB) — We got to this point beginning with the George H. 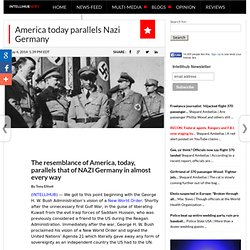 W. Bush Administration’s vision of a New World Order. Shortly after the unnecessary first Gulf War, in the guise of liberating Kuwait from the evil Iraqi forces of Saddam Hussein, who was previously considered a friend to the US during the Reagan Administration. Since 9-11, and the resulting Patriot Act went into effect, we have witnessed the door opened for a complete Socialistic Dictatorship to rule over the American people, as we now see with the Obama Administration. Hard 9/11 Truth - Conspiracy of 9/11 Money - See the Motives, Technology & Plausible Deniability. Invisible Empire A New World Order Defined Full (Order it at Infowars.com) Dark Legacy George Bush and the murder of John Kennedy Jan 2009. NCF: The Bush Nazi connection. Investigation Into the Sordid Past Behind the Bush Family.