Fuel Systems. This system requires a draft so that there is sufficient oxygen to maintain combustion. 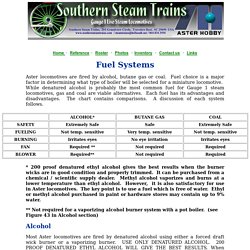 If the boiler should run dry, the draft caused by the exhaust ceases and the fire will quickly die out. Meths. The Fusion Burner - Wilesco version constructed (scroll) Fusion as in a fusion of all of the ideas and systems that I've seen, distilled into a simple and ugly little burner that works well, is reliable and (in my opinion) about as safe a burner as I am likely to ever design. 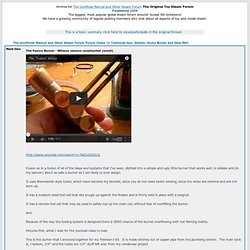 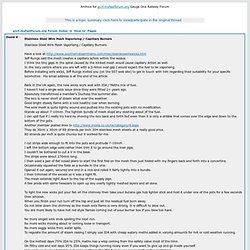 I think the tiny gaps in the spiral caused by the kinked mesh would cause capillary action as well. In the very centre where you are left with a 3-4mm oval gap I would expect the fuel to be vaporising. Before installing wire wicks, Jeff Runge invites you (on the SST web site) to get in touch with him regarding their suitability for your specific locomotive. His email address is at the end of his article. Back in the UK again, the new wicks work well with IDA / Meths mix of fuel. I cut strips wide enough to fit into the pots and protrude 7-10mm. Stainless Screen Wicks for Aster Locomotive by Jeff Runge.

Stainless Screen Wicks for Aster Locomotives by Jeff Runge This approach offers an alternative to other traditional wick materials. 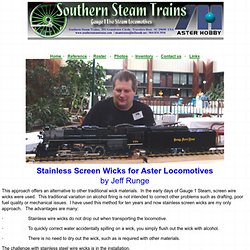 Chicken Feed Meths Burner. One for MM, Building a chicken feed burner. Lets see if this diagram helps any better! 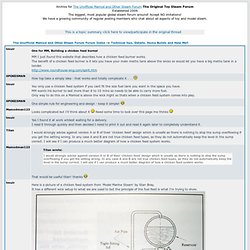 P.228-9. Denatured or Industrial Alcohol. Down the chain attached as shown. 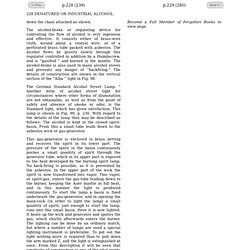 The alcohol-brake or regulating device for controlling the flow of alcohol is very ingenious and effective. It consists either of brass-wire cloth, wound about a central wire, or of a perforated brass tube packed with asbestos. Soda Can Stove: How to Build. If all you want to do is boil water, consider making the cat food can stove instead of the soda can stove. 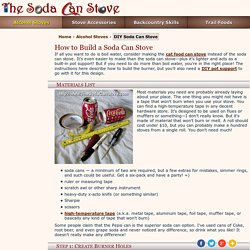 It's even easier to make than the soda can stove—plus it's lighter and acts as a built-in pot support! But if you need to do more than boil water, you're in the right place! Locomotive of the Month. History One of the most popular and successful locomotives ever produced by Bassett-Lowke was its 2-6-0 for gauge-0 track. 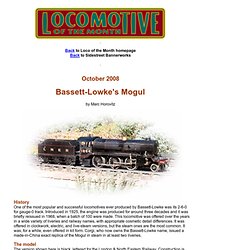 Introduced in 1925, the engine was produced for around three decades and it was briefly reissued in 1968, when a batch of 100 were made. This locomotive was offered over the years in a wide variety of liveries and railway names, with appropriate cosmetic detail differences. Fuel Systems. Brief Introduction to Boiler & its Type. Boiler Types Live steam models utilize many different varieties of boilers ranging from the simple pot to the locomotive type. 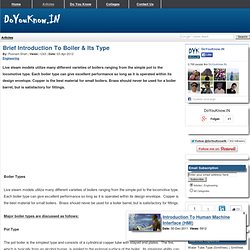 Each boiler type can give excellent performance so long as it is operated within its design envelope. Copper is the best material for small boilers. Brass should never be used for a boiler barrel, but is satisfactory for fittings. Major boiler types are discussed as follows: Pot Type. Alcohol Burner for Live Steamers - IBLS. Alcohol Burner for "Live Steamers" by Kenneth V. 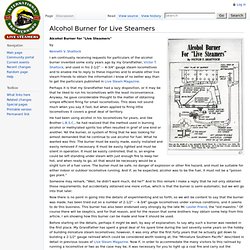 Shattock I am continually receiving requests for particulars of the alcohol burner invented some sixty years ago by my Grandfather, Victor T. Japanese type (sort of) vaporizing burner. Mogogear, Thanks! (and sorry for the "credit confusion in my first post, It belongs to you. Yes, I built the bottom also. I did a mess of it though, had to solder it several times to fix leaks, the copper top warped and I burnt holes in the sides(No pictures, sorry).

Therefore the black paint and the fake name plate at the side. Here it is with a boiler on top, I wanted it to look kind of "old", similar to some pictures I've seen. Need to make a door also, so I can light it... metalhead100, yes you are right (Googled on ebay), that's the same type as mogogear posted about, didn't know they were lab burners... Did a steam test outdoors and I manage to get a nice long "smokescreen" of steam and yet the boiler is just 100cc. Finally, thanks for all nice feedback!! Mamod SL2 / SL3 Refurb/Restoration. Thanks for your comments so far. Stripping down the loco was pretty straight forward apart from the massive 4mm pop rivets that had been used to re-attach the Smoke box\Boiler\Side Tank assembly. MAMOD LOCO VAPORISING BURNER TRIES.

An Introduction To Spirit Firing. This is an updated version of an article by Roger Loxley that first appeared in 'Steamlines' magazine in the 1980's and in 1995 was also published in book form by Sidestreet Bannerworks Inc. Drawings in figures 2 and 3 by Marc Horovitz. Meths. One for MM, Building a chicken feed burner. New burner for Mamod locomotive. Hi, In the 1980's along with a lot other people notabely Deryk Goodall I was trying to make the Mamod locomotive perform a lot better. Deryk is known for his adaptaion of a bicycle tyre valve into a top up valve for model steam engines. He also did a lot of other things to improve the performance of Mamod and other steam engines: designing and making a meths burner, increased the boiler pressure by altering the safety valve which he also stopped from dribbling, piston and their rods were fitted with'O' ring.

Lots of things were done like seating the cylinders and reversing valve better and evolving a system of tightening wheels and crank pins when they came loose. Boilers were taken apart and hard soldered back together. All these improvements he made were written up in the Model Press and many of us copied them.