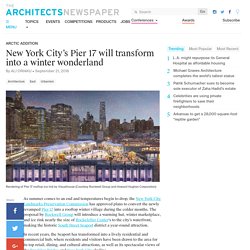 The proposal by Rockwell Group will introduce a warming hut, winter marketplace, and ice rink nearly the size of Rockefeller Center‘s to the city’s waterfront, making the historic South Street Seaport district a year-round attraction. In recent years, the Seaport has transformed into a lively residential and commercial hub, where residents and visitors have been drawn to the area for its top retail, dining, and cultural attractions, as well as its spectacular views of the Brooklyn Bridge and New York City skyline. MJBizCon - Las Vegas Convention Center NOV 14-16, 2018. Come Back Daily Opens World’s First Educational, Experiential CBD Hub in NYC. New York City, Nov. 15, 2018 (GLOBE NEWSWIRE) -- Come Back Daily, the world’s first cannabidiol (CBD) educational and experiential retail hub, is now open in New York City at 381 Broadway (between Walker & White streets) New York, NY 10013. 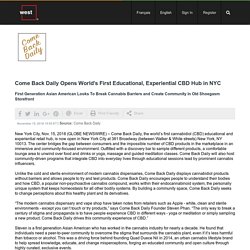 The center bridges the gap between consumers and the impossible number of CBD products in the marketplace in an immersive and community-focused environment. Outfitted with a discovery bar to sample different products, a comfortable lounge area to unwind over food and drinks or yoga, massage and guided meditation classes. Come Back Daily will also host community-driven programs that integrate CBD into everyday lives through educational sessions lead by prominent cannabis influencers. Unlike the cold and sterile environment of modern cannabis dispensaries, Come Back Daily displays cannabidiol products without barriers and allows people to try and test products.

Buzzfeed to open retail store next month. BuzzFeed is investing in the brick and mortar retail business, partnering with others to open an experiential store that will rotate products aimed at millennial families. 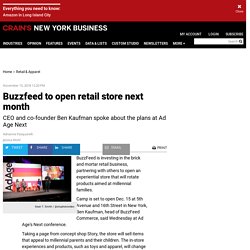 Camp is set to open Dec. 15 at 5th Avenue and 16th Street in New York, Ben Kaufman, head of BuzzFeed Commerce, said Wednesday at Ad Age's Next conference. Taking a page from concept shop Story, the store will sell items that appeal to millennial parents and their children. The in-store experiences and products, such as toys and apparel, will change out every eight to 12 weeks, mimicking the strategy of Story, which Rachel Shechtman founded in 2011. David Stark Design on Instagram: “One of the jobs we take seriously at #davidstarkdesign is #storytelling . Here, at a recent anniversary exhibition and conference, we…” Futurefires. PNEUHAUS. Futurefires. Metamorphosis by Alex Andre. Axioma – Onionlab. Lull. Marshmallow Laser Feast: augmented reality will overtake VR. Thrival Festival. Inspiration Station Vol. 15 - Clive.

This interface wipes your cookies when you clean your screen. Cookies are omnipresent online, and while some browsers block trackers automatically, most of us are followed by invisible eyes everywhere we go on the internet. 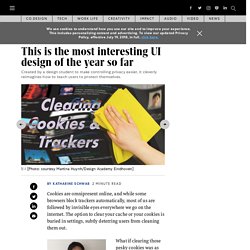 The option to clear your cache or your cookies is buried in settings, subtly deterring users from cleaning them out. What if clearing those pesky cookies was as easy as physically wiping your computer screen? That’s the idea behind Augmented Mundanity OS. The project, by designer and recent graduate of the Design Academy Eindhoven Martina Huynh, envisions a new kind of operating system where mundane, everyday gestures are an interface for maintaining your privacy and security. Futurefires. Moment Factory on Instagram: “A studio-wide role-playing game to try out our latest technological innovations □ ⛓ in bio for full □ /// Un jeu de rôle à l’échelle du…” Columbia Journalism Review's "Fake News Stand" was staged October 30 near New York's Bryant Park. The pop-up was stocked with... Watch: How British Airways Staged a Freddie Mercury Flash Mob. LONDON Before becoming the lead singer for Queen in 1970, Freddie Mercury worked as a baggage handler at London’s Heathrow Airport. 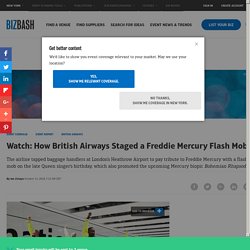 British Airways recently paid tribute to this fact, and celebrated the late rock legend’s birthday on September 5, by staging a flash mob. The airline produced the stunt in house and partnered with choreographer and creative director Lyndon Lloyd (known for his work on Strictly Come Dancing and The X Factor) to tap Heathrow baggage handlers to learn a routine to the Queen song, “I Want to Break Free.” Wearing yellow military-style jackets and white trousers that paid tribute to one of Mercury’s iconic looks, employees performed the routine for travelers in the airport’s Terminal 5 baggage claim. Some travelers in the terminal were also given hand-drawn fan posters to hold up during the routine. The stunt was also in partnership with 20th Century Fox to promote the new Mercury biopic Bohemian Rhapsody, which premieres in the U.S. on November 2.

The $24B promotional products industry is an environmental nightmare. Don’t get me wrong. 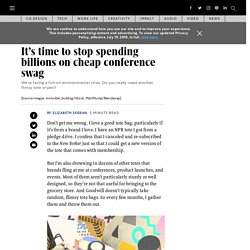