83 Fed. Reg. 40460; Regulation Identifier No. 1024-AE45
Three critical rule changes proposed by US Natl Park Service are:
1. requiring permits for all demonstrations;
2. making demonstrators pay for these permits; and
3. closing the White House sidewalk to protesters 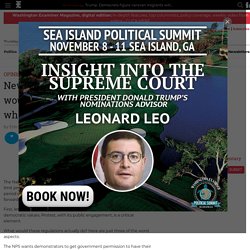 With the end of the public comments period on Monday, now the NPS is tasked with determining how to move forward with its policies. Here’s what the the agency must consider: First, lets be clear what’s at stake here. Free speech is the core of our democratic values. Protest, with its public engagement, is a critical element. What would these regulations actually do? The NPS wants demonstrators to get government permission to have their protests by requiring permits ahead of time. Additionally, NPS is considering making demonstrators pay for these permits as well as other fees that they decide to tack on. Finally, the park service has also proposed to close off most of the White House sidewalk to protests, drastically limiting a key forum for public expression. 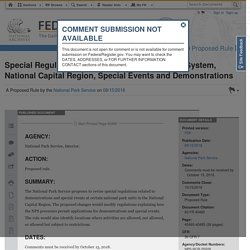 Proposed rule. The National Park Service proposes to revise special regulations related to demonstrations and special events at certain national park units in the National Capital Region. The proposed changes would modify regulations explaining how the NPS processes permit applications for demonstrations and special events. The rule would also identify locations where activities are allowed, not allowed, or allowed but subject to restrictions. Comments must be received by October 15, 2018. You may submit comments, identified by the Regulation Identifier Number (RIN) 1024-AE45 by any of the following methods: 2018-17386. Untitled. Get Off My Lawn! October 16, 2018 by David Bookbinder Yesterday the Niskanen Center submitted a comment letter on the National Park Service’s proposed changes to the rules governing demonstrations and protests in Washington, D.C. 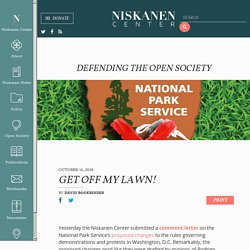 Remarkably, the proposed changes read like they were drafted by minions of Rodrigo Duterte, Recep Tayyip Erdoğan, or Vladimir Putin. Our letter, which was co-signed by 35 prominent individuals and 8 organizations, focuses on just three of the more galling proposed rule changes: requiring all demonstrations to get permits, making demonstrators pay for these permits, and closing the White House sidewalk to protesters. Here’s a thought experiment: imagine asking Ben Franklin, Sam Adams, Thomas Jefferson, or any other signer of the Declaration of Independence whether they thought it would be a good idea to necessitate the King’s permission (and pay for the privilege of doing so), before they could protest the Stamp Act or the Townshend Duties. 10/15/18 Letter from 43 US individuals & organizations deeply concerned about NPS's "profoundly anti-democratic & flagrantly unconstitutional" proposed regs. 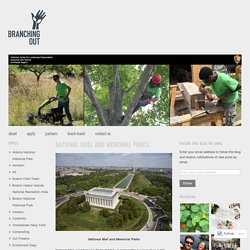 NAMA’s origins are as old as the capital city itself. NAMA Website as of 20/18/2018. 4/21/17: White House Sidewalk Permanently Closed For Security Reasons. A strip of pavement in front of the White House has been permanently blocked off from the public after numerous security breaches/jumpers cleared the fence at that spot. 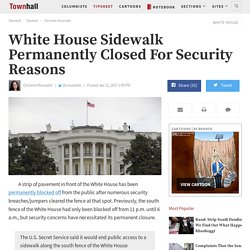