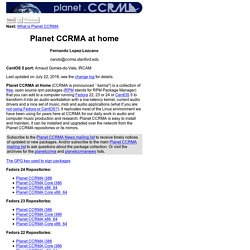 Planet CCRMA at Home (CCRMA is pronounced ``karma'') is a collection of free, open source rpm packages (RPM stands for RPM Package Manager) that you can add to a computer running Fedora 22, 23 or 24 or CentOS 5 to transform it into an audio workstation with a low-latency kernel, current audio drivers and a nice set of music, midi and audio applications (what if you are not using Fedora or CentOS?). The GPG key used to sign packages. AATranslator - Home Page. Ardour - the digital audio workstation. Sound and Music Applications. Next: Pd and externalsUp: The Planet CCRMA package Previous: A roadmap for Planet Subsections Here is the sound and music applications rpm collection. 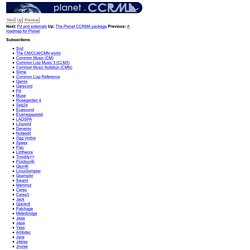 Each application comes with a yum incantation that will hopefully get it (and everything else it needs and you don't have) installed. Under the heading ``Packages'' you will find direct links to the source and binary rpms as well, for both Planet CCRMA packages and packages that have migrated to Fedora or other repositories. Snd Latest version. Abjad (2.19) — Abjad 2.19 documentation. The Rosegarden Handbook. The On-Line Encyclopedia of Integer Sequences® (OEIS®) Music21: a Toolkit for Computer-Aided Musicology.

The long-awaited (at least by me) version 2 of music21 is released! 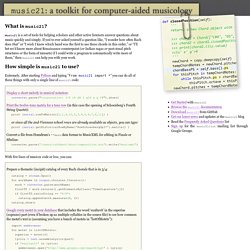 This is the first version of the v.2 release to be out of beta and stable enough for general use by everyone. Upgrade with: pip install --upgrade music21 Or download from GitHub. The first non-beta release of music21 since v. 1.9.3 (June 2014) gives a ton of new features and lots of new speed. Changed and Added features * Duration and Offset now use Fractions when necessary for exact representation of tuplets. In case anyone is keeping track, since v.1.0 (June 2012), here are the: Biggest changes between 1.0 and 1.9 * Store complete Streams via FreezeThaw* Output to Vexflow and `music21j`* Converters have been moved into packages.* It takes 1/3 the time to do most operations, and 1/4 the time to start up.* Capella supported. Oh, and I did more than patch bugs in the last week: Release notes since 2.0.11 incompatible changes. Roland_Kuit:SoundLab I. Source: electro-music.com From Data Recovery, USA: Roland's synthesis tutorial is hands down the best reference for the Nord G2. 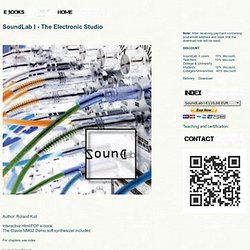 Period. It also serves as an outstanding resource and workbook for general synthesis. All the concepts covered in SoundLab can easily be applied to Max, Reaktor, or whatever you use. From Memmorshell. Now I have had this tutorial for a few weeks, I just wanted to say that it is really an amazing source of information. From Drumfish, France: I am so impressed of the work you have done in this tutorial..........just amazing really. From Ark, USA: My first observation is that it is pitched at what I think at just the right level.It assumes you understand the mechanics of creating patches and the rudiments of synthesis. From Marc, The Netherlands. Axoloti : a digital audio platform for makers. A new solution to create your own digital synthesizer, effects unit, groovebox or stomp-box, quick and easy. 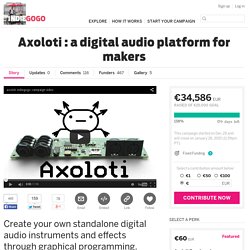 With the Axoloti Patcher on your computer you can program your sound, composition, and interaction by selecting objects like oscillators, filters, envelopes from the object library: and drawing connections on your computer: With the Axoloti Core hardware connected to your computer, you can tweak parameters in real time. Or map parameters to MIDI controllers and tweak without computer. After uploading your patch, the hardware runs independent from a computer. Axoloti enables "classical" virtual analog synthesis but also allows effects processing, step-sequencing, sample playback, or granular processing. Setup examples You can connect virtually everything with Axoloti - the real killer application is anything you can come up with yourself. 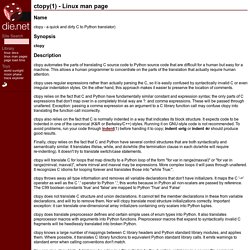 Ctopy uses regular expressions rather than actually parsing the C, so it is easily confused by syntactically invalid C or even irregular indentation styles. Ctopy relies on the fact that C and Python have fundamentally similar constant and expression syntax; the only parts of C expressions that don't map over in a completely trivial way are ? Ctopy also relies on the fact that C is normally indented in a way that indicates its block structure. Creating Rhythms. This book is the result of a lifelong love of music and an obsession with patterns. 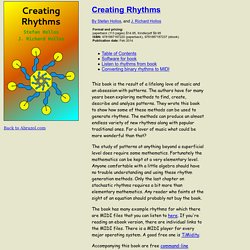 The authors have for many years been exploring methods to find, create, describe and analyze patterns. They wrote this book to show how some of these methods can be used to generate rhythms. The methods can produce an almost endless variety of new rhythms along with popular traditional ones. For a lover of music what could be more wonderful than that? The study of patterns at anything beyond a superficial level does require some mathematics. The book has many example rhythms for which there are MIDI files that you can listen to here.