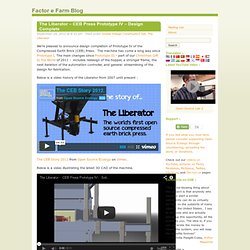 The machine has come a long way since Prototype I. The main changes since Prototype III - part of our Christmas Gift to the World of 2011 - includes redesign of the hopper, a stronger frame, the next iteration of the automation controller, and general streamlining of the design for fabrication. Global Village Construction Set by Marcin Jakubowski. Open Source Ecology is a network of farmers, engineers, and supporters building the Global Village Construction Set - a modular, DIY, low-cost, open source, high-performance platform that allows for the easy fabrication of the 50 different industrial machines that it takes to build a small, sustainable civilization with modern comforts. 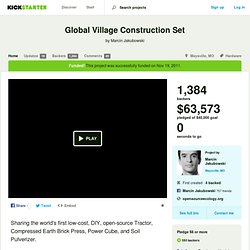 The aim of the GVCS is to lower the barriers to entry into farming, building, and manufacturing. Its a life-size lego set that can create entire economies, whether in rural Missouri, where the project was founded, or in the developing world. So Far we’ve prototyped 8 of the 50 Machines and we’ve been expanding rapidly. We are 100% crowd-funded. We have 400 True Fans that support our work monthly. Please watch these videos if you are new to the project: What Makes the Global Village Construction Set so special? Why should I help fund this project? The library of instructional material that we produce will make replication a straightforward task.

Absolutely! CEB Press IV. See for video and links to all documentation for The Liberator IV - Open Source CEB Press, Prototype IV. [ edit ] CEB Press IV This version of the press builds of Version 3 and makes improvements towards greater ease of use and quicker fabrication. 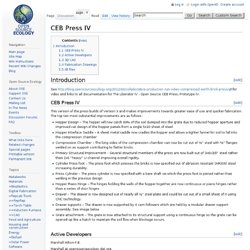 The top ten most substantial improvements are as follows: Hopper Design – The hopper will now catch 99% of the soil dumped into the grate due to reduced hopper aperture and improved cut design of the hopper panels from a single 5x10 sheet of steel Hopper Interface Saddle – A sheet metal saddle now cradles the hopper and allows a tighter funnel for soil to fall into the compression chamber Compression Chamber – The long sides of the compression chamber can now be cut out of ½” steel with ½” flanges welded on as support contributing to flatter bricks. Primary Structural Improvement – Several structural members of the press are now built out of 3x6x3/8” steel rather than 2x6 “heavy” U-channel improving overall rigidity. . [ edit ] Active Developers. Civilization Starter Kit DVD v0.01. Global Village Construction Set - TED Talk. Catching Up with Open Source Ecology. One of the many cool open source initiatives we’ve been keenly following here at MAKE is the Open Source Ecology project and their Global Village Construction Set (GVCS). 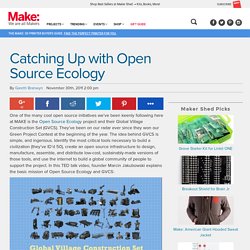 They’ve been on our radar ever since they won our Green Project Contest at the beginning of the year. The idea behind GVCS is simple, and ingenious. Identify the most critical tools necessary to build a civilization (they’ve ID’d 50), create an open source infrastructure to design, manufacture, assemble, and distribute low-cost, sustainably-made versions of those tools, and use the internet to build a global community of people to support the project. In this TED talk video, founder Marcin Jakubowski explains the basic mission of Open Source Ecology and GVCS: Since we last checked in with them in February, they’ve been hard at work on their “Factor E Test Farm,” a place where they can experiment with and test out many of the tool designs and techniques that they are developing. 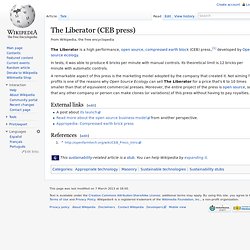 In tests, it was able to produce 6 bricks per minute with manual controls. Its theoretical limit is 12 bricks per minute with automatic controls. A remarkable aspect of this press is the marketing model adopted by the company that created it. Not aiming for profits is one of the reasons why Open Source Ecology can sell The Liberator for a price that's 6 to 10 times smaller than that of equivalent commercial presses. Moreover, the entire project of the press is open source, so that any other company or person can make clones (or variations) of this press without having to pay royalties. 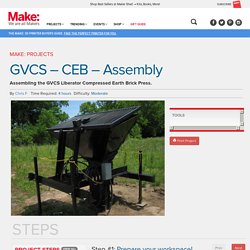