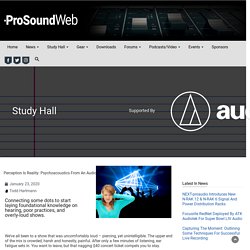 The Art Of Listening: Refining A Vital Pro Audio Skillset. How often do you listen to music? 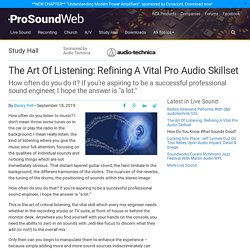 I don’t mean throw some tunes on in the car or play the radio in the background, I mean really listen; the kind of listening where you give the music your full attention, focusing on the qualities of individual sounds and noticing things which are not immediately obvious. That distant layered guitar chord; the faint timbale in the background; the different harmonies of the violins. Is Getting A Good Mix Using Headphones Possible? Sharing The Long Road: The Career Of Claudia Engelhart & Inside Her Unique Partnership With Artist Bill Frisell.

In the age of “one and done,” it seems more common for engineers to work with an artist for a tour and then move on to find new work. 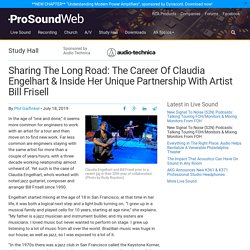 Far less common are engineers staying with the same artist for more than a couple of years/tours, with a three-decade working relationship almost unheard of. Yet such is the case of Claudia Engelhart, who’s worked with noted jazz guitarist, composer and arranger Bill Frisell since 1990. Engelhart started mixing at the age of 18 in San Francisco; at that time in her life, it was both a logical next step and a light bulb turning on. “I grew up in a musical family and played cello for 10 years, starting at age nine,” she explains.

“My father is a jazz musician and instrument builder, and my sisters are musicians. Not So Fast... Mixing And Routing Advantages In The Analog Realm. For years, many have reported the death of analog equipment, especially large-frame consoles, but the truth is that they still see widespread use in shows and events of every type and size. 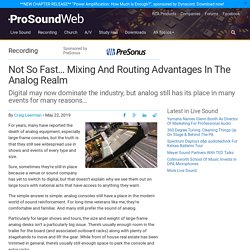 Sure, sometimes they’re still in place because a venue or sound company has yet to switch to digital, but that doesn’t explain why we see them out on large tours with national acts that have access to anything they want. The simple answer is simple: analog consoles still have a place in the modern world of sound reinforcement. A Minimalist Approach: Effectively Using Just One Effect In The Mix - ProSoundWeb. I like using spatial effects to create interesting moments in the music coming from the stage. 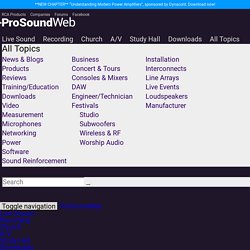 A well-chosen reverb that supports the mood and the message of the musical content is the one “magical component” I’d have the most difficult time giving up if forced to restrict my workflow or gear options. Reverb is also probably also one of the most qualifying distinctions between digital consoles. Getting EQ to translate from one console to the other is usually a much easier task than mimicking a reverb setting from one desk to another. When I have time and the situation allows it, I provide myself with a palette of various spatial colors – drum room, snare plate, long drum verb, vocal plates and halls, tap tempo delays and slapbacks – that are all carefully chosen, equalized, sometimes dynamically processed and with their parameters linked to controlling encoders with meticulous deliberation.

Retro Mixing: Can The 10-Channel Challenge Improve Your Live Mixes? - ProSoundWeb. Anyone who knows me can attest to the fact that I mix with a very straightforward style, using very few bells and whistles. 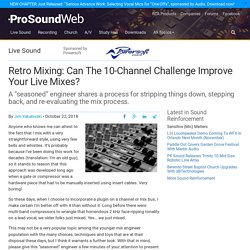 It’s probably because I’ve been doing this work for decades (translation: I’m an old guy), so it stands to reason that this approach was developed long ago when a gate or compressor was a hardware piece that had to be manually inserted using insert cables. Very boring! How To Series: Distopik Brickwall Limiter. Mixing Secrets For The Small Studio (Cambridge Music Technology) The 'Mixing Secrets' Free Multitrack Download Library Below is a list of multitrack projects which can be freely downloaded for mixing practice purposes. 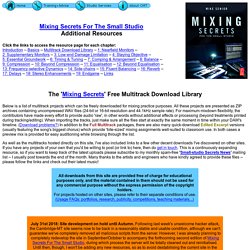 All these projects are presented as ZIP archives containing uncompressed WAV files (24-bit or 16-bit resolution and 44.1kHz sample rate). For maximum mixdown flexibility, the contributors have made every effort to provide audio 'raw', in other words without additional effects or processing (beyond treatments printed during tracking/editing). AES to discuss immersive audio at We Are Robots music tech festival - Audio Media International. Search. Search. All of the best REVERBS in 1 VIDEO!!! Audiomediainternational. Mixing Remotely With Larry Crane (Full) 5 more mixing mistakes that I used to make… and how to avoid them. Matt Darey: Mixing an album in Dolby Atmos is 'like future-proofing your music' English electronic music producer Matt Darey has expressed his enthusiasm for the widespread adoption of Dolby Atmos for music, after recording, mixing and mastering his latest album, Wolf, in the immersive audio format. 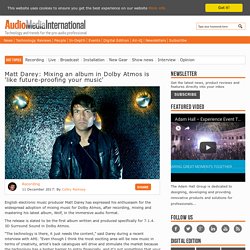 English electronic music producer Matt Darey has expressed his enthusiasm for the widespread adoption of mixing music for Dolby Atmos, after recording, mixing and mastering his latest album, Wolf, in the immersive audio format. Feature: Hybrid mixing systems. Engineer Simon Allen takes Audio Media International inside the current market for hybrid audio mixing systems It doesn’t matter what area of the pro audio world you come from, we all share a level of inner-geek. 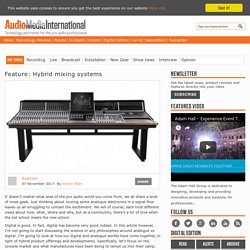 Just thinking about routing some analogue electronics in a signal flow leaves us all struggling to contain the excitement. We will of course, each hold different views about how, what, where and why, but as a community, there’s a lot of love when the old school meets the new school. Digital is good. In fact, digital has become very good indeed. How To Mix Kick & Bass In Dance Music - Audient.

Free - The A-Z Of Waves - Interactive eBook Download — Studio One Expert. Under The Bus? Uses & Applications Of Mix Bus Compression In The Live Realm - ProSoundWeb. By Jonah Altrove • October 3, 2017 The topic of mix bus compression – mixing through a compressor on the master output – can stir up a lot of conversation among engineers across many genres (live, recording, broadcast, etc.). 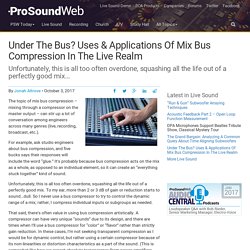 For example, ask studio engineers about bus compression, and five bucks says their responses will include the word “glue.” It’s probably because bus compression acts on the mix as a whole, as opposed to an individual element, so it can create an “everything stuck together” kind of sound. Interview: Ryan Hewitt (The Lumineers, Vance Joy)

10 Myths About Normalization - Hometracked. The process of normalization often confuses newcomers to digital audio production. The word itself, “normalize,” has various meanings, and this certainly contributes to the confusion. However, beginners and experts alike are also tripped up by the myths and misinformation that abound on the topic. I address the 10 most common myths, and the truth behind each, below. Peak Normalization First, some background: While “normalize” can mean several things (see below), the myths below primarily involve peak normalization. Peak normalization is an automated process that changes the level of each sample in a digital audio signal by the same amount, such that the loudest sample reaches a specified level.

Can We Mix Effectively On Headphones? The Audio Hunt to offer free signal processing service. Users now able to have their audio files processed through a variety of vintage gear via a new partnership with Legacy Studios. Audio gear hire website The Audio Hunt is partnering with Legacy Studios in the Netherlands throughout February to offer its Audio Signal Processing (ASP) service to all users.

The service enables members to send audio files to others for remote processing through authentic gear which may otherwise be difficult for them to get their hands on. Members of The Audio Hunt community who successfully refer others to the website will gain credits that are redeemable for free audio file processing through genuine vintage equipment, and members who sign up via referral will also receive a free credit.

Stephen Bartlett (pictured), producer, recording engineer and CEO of the website, says that connecting people and creating a global community of sharing is crucial to this goal. Secrets Of The Mix Engineers: Cenzo Townshend. Gettin’ Kinda Hectic: Snap! and Chill Rob G’s Epic “Power” Struggle - The Remix question. In The Studio: Using Compression On Your Master Fader - ProSoundWeb. By Joe Gilder • April 23, 2015. J.R. Rotem: Fall Out Boy 'Centuries' Surfer EQ - the pitch tracking EQ. Ryan McCambridge: Why I mix 'in the box' Audio engineer, producer and educator tells us why he has embraced the digital way of working.

Massive Attack's New App Generates Unique Remixes Based on Your Environment. What To Do When Your Mixes Don’t Translate. By Joe Gilder • May 24, 2016. Five Steps To Punchy Drum Compression. By Bobby Owsinski • March 14, 2016. Butch Vig Vocals. Why I Mixed My Latest EP At Starbucks (And 4 Lessons I Learned Along The Way) - Recording Revolution. Get Creative with Distortion using SoundToys Decapitator - Blog. Giles Martin on remixing The Beatles' A Hard Day's Night.

Soundation — a powerful online music studio with recording, effects, virtual instruments and over 700 free loops and sounds. In The Studio: How To Create Width, Height And Depth In A Mix. In The Studio: The Complete Guide to Audio Pass Filters - ProSoundWeb. By Rob Schlette • November 26, 2013 An audio pass filter attenuates an entire range of frequencies.

Not Your Basic K-Pop. Mixing Massive Attack. Review: Softube Console 1 MkII. Mint Muse Sound Flare is a new digital audio workstation (DAW) built from the ground up for mixing 3D spatial audio in VR. Its intuitive design enables fast ... Nuendo 7 to include Wwise integration. The Five Main Types of Reverb, and How to Mix with Them. Free reverb resources - where to find impulse responses.