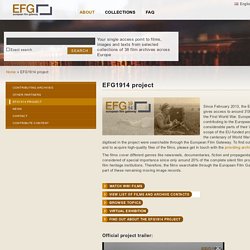 European film archives contributing to the European Film Gateway digitised considerable parts of their WWI collections in the scope of the EU-funded project EFG1914. In time for the centenary of World War One in 2014, all films digitised in the project were searchable through the European Film Gateway. To find out about re-use conditions and to acquire high-quality files of the films, please get in touch with the providing archives.

The films cover different genres like newsreels, documentaries, fiction and propaganda and have to be considered of special importance since only around 20% of the complete silent film production survived in the film heritage institutions. Therefore, the films searchable through the European Film Gateway constitute a crucial part of these remaining moving image records.