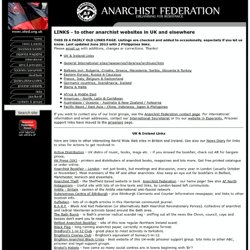 Listings are checked and added to occasionally, especially if you let us know. Last updated June 2013 with 2 Philippines links. Please email us with additions, changes or corrections. Thanks! If you want to contact any of our local groups, see the Anarchist Federation contact page . UK & Ireland Links Here are links to other interesting World Wide Web sites in Britain and Ireland. Active Distribution - UK distro of music, books, mags etc. - if you missed the bookfair, check out AR for bargain prices. General International sites/newswires/libraries/archives/lists 3 Monkeyz - an international anarchist portal. Contact our International Secretariat . Balkans, Greece & Turkey Athens Indymedia - English-language newswire.

Eastern Europe, Russia & Caucasus France, Italy, Belgium & Switzerland Germanic countries, Scandinavia, Iceland Iberia & Malta Africa & Middle East Americas - North, Latin & Caribbean. Is there website or forums for anarchists? - Anarchy101 Q&A. No, there is not a specific place, but there are many locations that could be of interest to you. 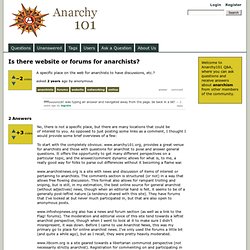 As opposed to just posting some links as a comment, I thought I would provide some brief overviews of a few: To start with the completely obvious: www.anarchy101.org, provides a great venue for anarchists and those with questions for anarchist to pose and answer general questions. It offers the opportunity to get many different perspectives on a particular topic, and the answer/comment dynamic allows for what is, to me, a really good way for folks to parse out differences without it becoming a flame war. www.anarchistnews.org is a site with news and discussion of items of interest or pertaining to anarchists. 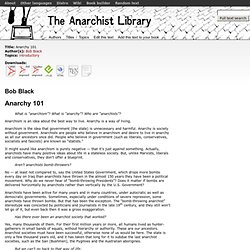 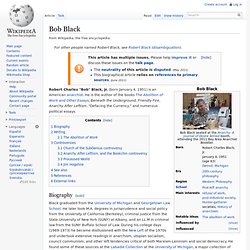 (born January 4, 1951) is an American anarchist. He is the author of the books The Abolition of Work and Other Essays, Beneath the Underground, Friendly Fire, Anarchy After Leftism, "Defacing the Currency," and numerous political essays. Biography[edit] Black graduated from the University of Michigan and Georgetown Law School. He later took M.A. degrees in jurisprudence and social policy from the University of California (Berkeley), criminal justice from the State University of New York (SUNY) at Albany, and an LL.M in criminal law from the SUNY Buffalo School of Law. History of anarchism. Modern anarchism sprang from the secular or religious thought of the Enlightenment.[15] The central tendency of anarchism as a mass social movement has been represented by anarcho-communism and anarcho-syndicalism, with individualist anarchism being primarily a literary phenomenon.[16] which did nevertheless have an impact on the bigger currents[17] and individualists also participated in large anarchist organizations.[18][19] Early history[edit] Taoism, which developed in Ancient China, has been embraced by some anarchists as a source of anarchistic attitudes. 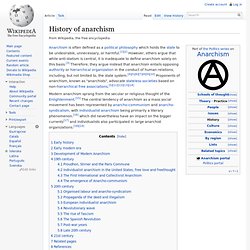 The Taoist sage Lao Zi (Lao Tzu) developed a philosophy of "non-rule" in the Tao Te Ching and many Taoists in response lived an anarchist lifestyle. In Athens, the year 404 BC was commonly referred to as “the year of anarchy”. Early modern era[edit] ‎libcom.org/files/Woodcock,%20George%20-%20Anarchism,%20A%20History%20Of%20Libertarian%20Ideas%20And%20Movements.PDF. About Us. Why Riseup is needed Can you rely on a corporate email provider for confidentiality of your sensitive email communications? 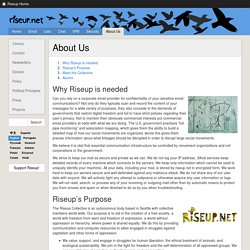 Not only do they typically scan and record the content of your messages for a wide variety of purposes, they also concede to the demands of governments that restrict digital freedom and fail to have strict policies regarding their user’s privacy. Not to mention their obviously commercial interests put commercial email providers at odds with what we are doing. The U.S. government practices “full pipe monitoring” and association mapping, which gives them the ability to build a detailed map of how our social movements are organized, worse this gives them precise information about what linkages should be disrupted in order to disrupt large social movements. We believe it is vital that essential communication infrastructure be controlled by movement organizations and not corporations or the government. 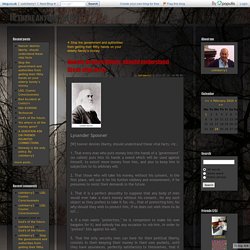 That every man who puts money into the hands of a "government" (so called) puts into its hands a sword which will be used against himself, to extort more money from him, and also to keep him in subjection to its arbitrary will. 2. Wakey Wakey: EP 5 - Philosopher & Author Larken Rose.