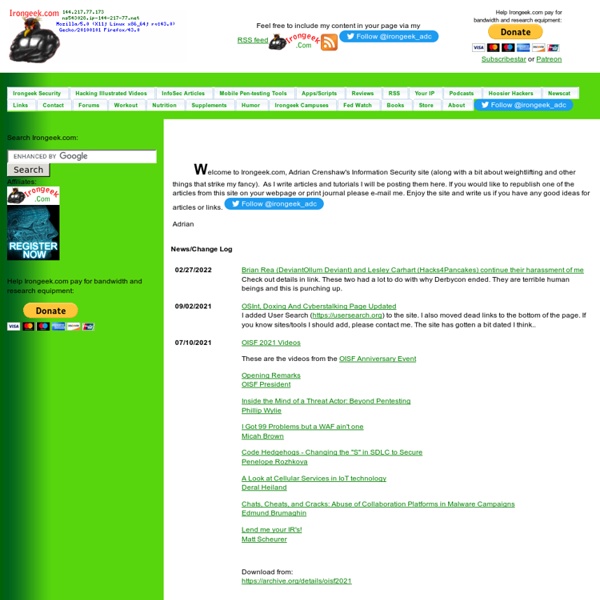 Learn the history of Kolmanskop, a Namibian ghost town covered in sand Brightly colored wallpaper peeling off the walls, dilapidated houses now inundated in rolling banks of sand … this is Kolmanskop, a ghost town in southern Africa’s Namib Desert, in the middle of a region known as “the forbidden zone.” And the story of how it got here is about as strange as the sight of the town today. (See nine of the world’s best ghost towns.) A strange, painful history

Hacking Mainframes; Vulnerabilities in applications exposed over TN3270 - Dominic White Derbycon 2014 Hacking Mainframes; Vulnerabilities in applications exposed over TN3270 Dominic White Derbycon 2014 IBM System Z Mainframes are in regular use in Fortune 500 companies. Far from being legacy these systems are running an actively maintained operating system (z/OS). Applications on these often occupy roles critical to the business processes they underpin, with much of the later technology built around them, rather than replacing them. AutoIt - AutoItScript Overview AutoIt v3 is a freeware BASIC-like scripting language designed for automating the Windows GUI and general scripting. It uses a combination of simulated keystrokes, mouse movement and window/control manipulation in order to automate tasks in a way not possible or reliable with other languages (e.g. VBScript and SendKeys). AutoIt is also very small, self-contained and will run on all versions of Windows out-of-the-box with no annoying “runtimes” required!

The Natter Was A Rocket-Based Wooden Aircraft By Germany Towards the end of World War II, an effort was made by Germany to take down the American bombers that were wreaking havoc in Germany. The Natter (grass snake) was developed as an inexpensive and easy to build interceptor that made use of the recently developed rocket technology for its flight. The aircraft was designed for single use but was utilized too late to have any kind of effect in tipping the scales of war. The Natter was the last-ditch effort by Germany that was taking quite a hit – literally – thanks to the allied bombing that was continuously ongoing.

Twitter took phone numbers users gave for account security and used them to target ads In July, the Federal Trade Commission (FTC) said Facebook had broken the law when it engaged in a similar practice. The FTC fined Facebook $5 billion for that and a litany of other instances where it mishandled user data. Twitter users are asked to provide information like their phone number to help secure their account through services such as two-factor authentication. Establishing a Quality Vulnerability Management Program without Wasting Time or Money - Zee Abdelnabi Converge 2016 Establishing a Quality Vulnerability Management Program without Wasting Time or MoneyZee Abdelnabi@Infosec_17">@Infosec_17 • Sell the story to establish your program to management. • Compare Vulnerability Management (VM) tools and learn how to pick the best tool set for your environment. • Determine the scope of devices do you want to include - mobile, employee devices, mainframe, plant floor, medical devices, SCADA? • Evaluate the costs and advantages of paying for Professional Services deployment vs training your team. • Determine the skills and competencies necessary to make a successful team. • Make a complete runbook. • Establish report templates and metrics do you need to show your program is successful.

10 Microsoft Word 2007 Hack & Tricks With an entirely new interface setup and advanced features you might find it difficult to catch up with MS Word. Even if you are a seasoned pro there are new stuffs to explore with Microsoft Word 2007. Well there are a myriad of hacks if you can explore but I have the top 10 hacks for MS Word 2007 that can really make the word processor more productive.

Why macOS Catalina is breaking so many apps, and what to do about it Apple’s latest Mac update, macOS Catalina, was released earlier this week, and with it came a flurry of complications both minor and major. For one, this update is the first for Apple to drop 32-bit application support, which is causing all sorts of headaches for users of smaller apps, plug-ins, and other software that may not be updated for quite some time or may have been created by a company that no longer exists. There are also a fair number of other issues with Catalina, like Adobe software incompatibility problems and unforeseen hurdles related to the removal of iTunes. That leads us to a series of important questions for Mac users who may be at risk of having important workflows disrupted by Catalina. What exactly might go wrong if you do upgrade?