Instructional Technology Facilitator at a high school in the midwest. 20+ years as educator K-12. Received Ed.D, 2010. Adjunct instructor since 2011.

The Ultimate Guide To Using iPads In The Classroom. How Students Benefit From Using Social Media 14.60K Views 0 Likes A lot of criticism has been leveled at social media and the effect it has on the way students process and retain information, as well as how distracting it can be. However, social media offers plenty of opportunities for learning and interactivity, and if you take a moment to think about it, it's not too hard to see how students benefit from using social media. 100 Web 2.0 Tools Every Teacher Should Know About 44.24K Views 0 Likes We're always trying to figure out the best tools for teachers, trends in the education technology industry, and generally doing our darnedest to bring you new and exciting ways to enhance the classroom.

To Flip Or Not Flip? iPad Apps. How do I get Apps to this device? 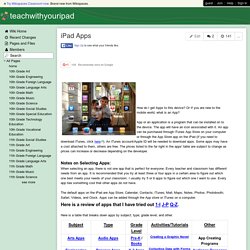 Or If you are new to the mobile world, what is an App? App or an application is a program that can be installed on to the device. The app will have an icon associated with it. An app can be purchased through iTunes App Store on your computer or through the App Store app on the iPad (If you need to download iTunes, click here). An iTunes account/Apple ID will be needed to download apps. Notes on Selecting Apps: When selecting an app, there is not one app that is perfect for everyone. Science Apps. 40 Most Awesome iPad Apps for Science Students. Posted on Wednesday June 15, 2011 by Staff Writers The iPad has found its way into hospitals, retail stores and homes across the nation, but it’s also making a big splash in the classroom, even with some of the best online colleges. 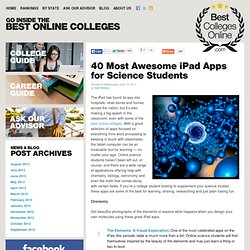 With a great selection of apps focused on everything from word processing to keeping in touch with classmates, the tablet computer can be an invaluable tool for learning — no matter your age. Online science students haven’t been left out, of course, and there are a wide range of applications offering help with chemistry, biology, astronomy and even the math that comes along with certain fields.

If you’re a college student looking to supplement your science studies, these apps are some of the best for learning, sharing, researching and just plain having fun. Chemistry Get beautiful photographs of the elements or explore what happens when you design your own molecules using these great iPad apps. Biology Astronomy Reference Tools Miscellaneous. Back to School: 40 Best Science iPad Apps for Students.

Making of science apps: Not the usual suspects. On the screens of millions of iPad and other mobile devices, moons and stars, elements and molecules swirl beneath our fingertips. 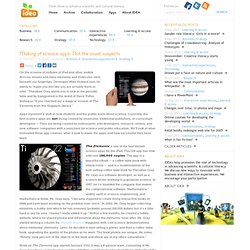 Developer Mike Howard says he wants to “make you feel like you are actually there in orbit.” Theodore Gray wants you to look at the periodic table and be transported to the world of Harry Potter, feeling as “if you checked out a magical version of The Elements from the Hogwarts library.” Apps represent a shift in how students and the public learn about science. Currently, the best science apps are not being created by museums, traditional publishers, or curriculum developers — They are being created by enthusiastic solo developers, research centers, and new software companies with a penchant for science and public education.

Science Apps for iPad, iPhone and iPod Touch. iPads and Tablets in Education. iPads take place next to crayons in kindergarten. By Clarke Canfield, Associated Press Posted 04/13/2011 09:59:18 AM | PORTLAND, Maine — Kindergarten classes are supplementing crayons, finger paints and flashcards with iPads, a development that excites supporters but that detractors worry is wasted on pupils too young to appreciate the expense. 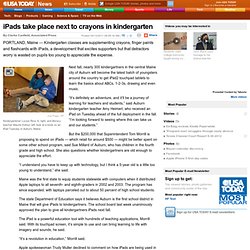 The Must-Have App Review Rubric. Added by Jeff Dunn on 2011-11-22 So you just downloaded a few educational apps that you think might be useful in your classroom. How do you accurately compare and contrast them? Thanks to a new app review rubric from by eMobilize , it’s easier than ever to understand just how useful an app may be in the classroom.