iPads and Tablets in Education 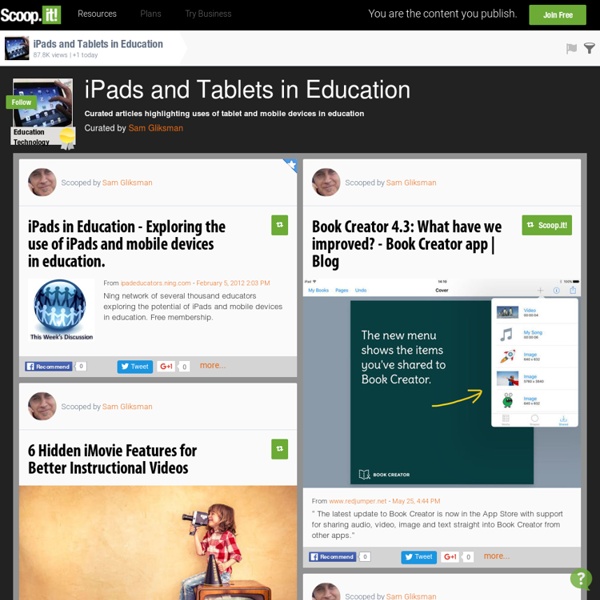 Students' math scores jumped 20% with iPad textbooks, publisher says By AppleInsider Staff A yearlong pilot program with digital textbooks on Apple's iPad found that students' algebra scores increased by 20 percent when compared to a curriculum with traditional books. On the heels of Apple's e-textbook announcement in New York City this week, publisher Houghton Mifflin Harcourt announced the results of its "HMC Fuse: Algebra I" pilot program at Ameila Earhart Middle School in California's Riverside Unified School District. The Algebra I digital textbook is touted as the world's first full-curriculum algebra application developed exclusively for Apple's iPad. In its test run, the "HMH Fuse" application helped more than 78 percent of students score "Proficient" or "Advanced" on the spring 2011 California Standards Test.

iPads take place next to crayons in kindergarten By Clarke Canfield, Associated Press Posted 04/13/2011 09:59:18 AM | PORTLAND, Maine — Kindergarten classes are supplementing crayons, finger paints and flashcards with iPads, a development that excites supporters but that detractors worry is wasted on pupils too young to appreciate the expense. Joel Page, AP Create an All-iPad Class Radio Show with AudioBoo, Bossjock, GoodReader, & SoundCloud <div class="greet_block wpgb_cornered"><div class="greet_text"><div class="greet_image"><a href=" rel="nofollow"><img src=" alt="WP Greet Box icon"/></a></div>Hello there! If you are new here, you might want to <a href=" rel="nofollow"><strong>subscribe to the RSS feed</strong></a> for updates on this topic.<div style="clear:both"></div></div></div>

50 Best iPad Apps for STEM Education Despite early doubts, the iPad has proven to be an incredibly valuable tool for education, both in the classroom and in homes around America. By offering students, from elementary school all the way up to the university level, the chance to do some hands-on learning, exploring, and sometimes even educational gaming, the device makes education fun and exciting, something that isn’t always easy to do. With schools falling behind in math and science education and companies unable to find enough qualified professionals to fill jobs in science and technology fields, pushing STEM education is more important than ever. Educators and parents can help get kids interested and perhaps even hooked on STEM no matter their age with the help of the iPad and the myriad great educational applications it offers.

3 Must-Have Technology Tools For Your Classroom Classrooms need more than just chalk and a few notebooks. There’s a plethora of technology out there but how do you choose what’s right for you? What’s the best technology for your particular classroom? Here are a few examples of helpful technology perfect for teachers young and old. iPad Apps How do I get Apps to this device? Or If you are new to the mobile world, what is an App? App or an application is a program that can be installed on to the device. The app will have an icon associated with it. An app can be purchased through iTunes App Store on your computer or through the App Store app on the iPad (If you need to download iTunes, click here).

7 Tips for Effectively Managing Your iPad Classroom **** Interview from THE Journal... The full article is at iPads are a great tool to encourage continual sharing and collaboration in the classroom, says education technology consultant Sam Gliksman. Gliksman runs iPads for Education, a Ning network that has drawn several thousand educators and other people interested in exploring the use of iPads in schools. He has captured much of what he's gleaned from working with schools and teachers on their iPad programs in a new book, iPad in Education for Dummies. Recently, he shared with THE Journal his best advice on what to do before a rollout and how to help an iPad classroom run as smoothly as possible to let teachers focus on the learning, not the technology.

iPad Applications In Bloom’s Taxonomy This has bubbled up in my feeds not once, but several times now. It’s an interesting graphic that actually places example iPad applications into Bloom’s levels of performance in the cognitive domain. Focussed around students, and not really workplace learning, but interesting nonetheless. Check it out. October 2 & 3 (NEC Birmingham), Booth #D250 | Register (Free) Leave a Reply iPads For All: One Sales Team's Story - Global-cio - Executive insights/interviews Level 3 just gave iPads to its entire North American sales team, and IT packed them with apps customized to their jobs. Level 3 Communications just gave iPads to its 1,300 North American salespeople and sales engineers. IT didn't take away their laptops, but it did load the iPads with software to do all the most important things in a salesperson's life: offer price quotes, build and make presentations, send email, look up customer records, check products. Level 3's sense of urgency is a reminder of just how fast tablets are moving into mobile workers' lives. 2011 was the year of pilot tests. 2012 is the year companies will roll out iPads by the thousands to entire sales and service teams, packing them with purpose-built business applications, not just generic email, browsers, and off-the-shelf productivity apps.