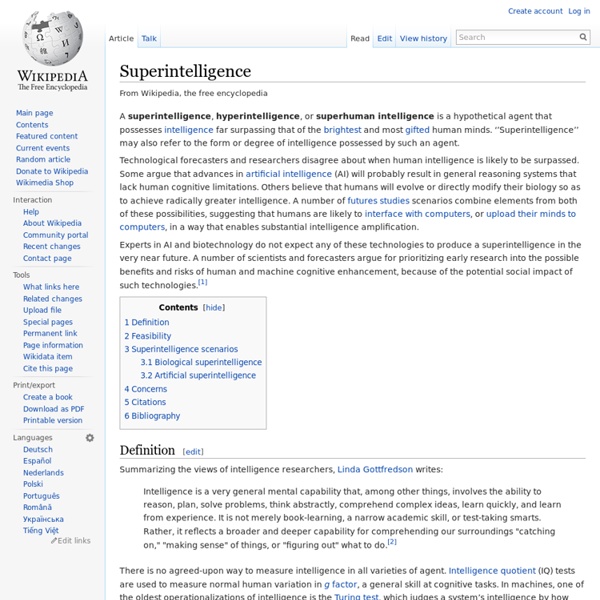 Related:  from metaphor to model... • Superintelligence

Minding the Planet: From Semantic Web to Global Mind Draft 1.1 for Review (integrates some fixes from readers) Nova Spivack (www.mindingtheplanet.net) This article presents some thoughts about the future of intelligence on Earth. In particular, I discuss the similarities between the Internet and the brain, and how I believe the emerging Semantic Web will make this similarity even greater.

The AI Revolution: Road to Superintelligence - Wait But Why PDF: We made a fancy PDF of this post for printing and offline viewing. Buy it here. (Or see a preview.) Note: The reason this post took three weeks to finish is that as I dug into research on Artificial Intelligence, I could not believe what I was reading. How Artificial Superintelligence Will Give Birth To Itself Kinja is in read-only mode. We are working to restore service. "So if you create an AI that has a terminal value of friendliness to humanity, the AI would not want to change itself in a way that caused it to be unfriendly to humanity," he says. "This way as the AI got smarter, it would use its enhanced intelligence to increase the odds that it did not change itself in a manner that harms us." "From there, the AGI would be interested in pursuing whatever goals it was programmed with — such as research, exploration, or finance."

en.m.wikipedia Ian Pretyman Stevenson (October 31, 1918 – February 8, 2007) was a Canadian-born U.S. psychiatrist. He worked for the University of Virginia School of Medicine for fifty years, as chair of the department of psychiatry from 1957 to 1967, Carlson Professor of Psychiatry from 1967 to 2001, and Research Professor of Psychiatry from 2002 until his death.[1] As founder and director of the university's Division of Perceptual Studies, which investigates the paranormal, Stevenson became known for his research into reincarnation, the idea that emotions, memories, and even physical bodily features can be transferred from one life to another.[2] Over a period of forty years in international fieldwork, he investigated three thousand cases of children who claimed to remember past lives.[3] His position was that certain phobias, philias, unusual abilities and illnesses could not be fully explained by heredity or the environment. Background[edit]

Six Global Theories of Mythology: Part Six – Myths express the Unconscious Human Mind The Human Mind The Sixth Global Theory – Myths reflect Man’s Unconscious Mind After the intensity of the progression of mythological theories in their investigation into the psychology, values, phenomenology, history and rituals of any particular civilisation or society, the Psychoanalytical Theory of myths was inevitable. Freud’s ‘Interpretation of Dreams’ investigated the link between the language of dreams and mythological symbols based on the tribal belief that dreams and myths arise from the same reality. What will happen when the internet of things becomes artificially intelligent? When Stephen Hawking, Bill Gates and Elon Musk all agree on something, it’s worth paying attention. All three have warned of the potential dangers that artificial intelligence or AI can bring. The world’s foremost physicist, Hawking said that the full development of artificial intelligence (AI) could “spell the end of the human race”. Musk, the tech entrepreneur who brought us PayPal, Tesla and SpaceX described artificial intelligence as our “biggest existential threat” and said that playing around with AI was like “summoning the demon”. Gates, who knows a thing or two about tech, puts himself in the “concerned” camp when it comes to machines becoming too intelligent for us humans to control.

Can AI save us from AI? Can AI save us from AI? Nick Bostrom’s book Superintelligence might just be the most debated technology book of the year. Since its release, big names in tech and science, including Stephen Hawking and Elon Musk, have warned of the dangers of artificial intelligence. conversations-dr-ian-stevenson-you-may-be-reading-this-in-some-future-past-life Q: Most of the subjects you've studied hail from cultures that accept reincarnation, like Indian Hindus. Could people in a culture more hostile to reincarnation repress past-life memories? A: That certainly happens. Still, there are cases in North America. Parents sometimes write me and say, ''My child is now 12 years old. I wish I knew about you when he was 2 or 3. The Global Brain, the Semantic Web, the Singularity and 360-2020 consciousness to create the Web of WE: socially-voiced co-creation - un knol de 刘Twain Video Introduction F irstly, thank you for your interest and I hope readers will contribute their own considered analysis and gut intuitions here intelligently, regardless of whether or not they agree with these postulations and the presentation of them. Secondly, I’m looking forward to our interactions and building upon this model together.

Artificial Superintelligence: A Futuristic Approach Artificial Superintelligence: A Futuristic Approach, by Roman V. Yampolskiy Indiegogo fundraiser for Roman V. en.m.wikipedia Arthur Wayland "Art" Ellison (1899–1994) was an actor and director who worked for the Kansas City Power and Light Company for forty-eight years before becoming a professional actor. Prior to that, he had appeared in scores of amateur stage productions in the Kansas City area. He was born in Potsdam, New York and he died in Kansas City, Missouri.[1] Director Herk Harvey speculated that Art Ellison had acted in more industrial and educational films than any other, including some directed by a young Robert Altman.[2] He is best known for his part in the 1962 cult-classic horror film Carnival of Souls.[3] Filmography[edit] References[edit]