FC chief Nov 2013 said: '“With really big data comes really big responsibility,” Ramirez said. “It's up to the companies who take part in this ecosystem to embrace their role as stewards of the consumer data they collect and use.

Internet of things tracking. The Internet of Things just got a watchdog: FTC issues official report. On Tuesday morning at the annual State of the Net conference in Washington DC, Federal Trade Commission Chairwoman Edith Ramirez gave a keynote address announcing the FTC's latest initiative: watching the Internet of Things for privacy violations. 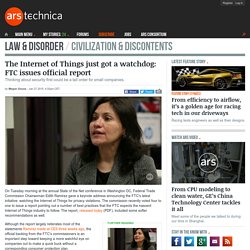 The commission recently voted four to one to issue a report pointing out a number of best practices that the FTC expects the nascent Internet of Things industry to follow. The report, released today (PDF), included some softer recommendations as well. Although the report largely reiterates most of the statements Ramirez made at CES three weeks ago, the official backing from the FTC's commissioners is an important step toward keeping a more watchful eye on companies out to make a quick buck without a corresponding consumer protection plan. BMW sounds alarm over tech companies seeking connected car data. BMW has warned that technology companies and advertisers are putting increasing pressure on carmakers to surrender data collected by connected cars, underlining the fine line being taken by the automotive industry between functionality and privacy. 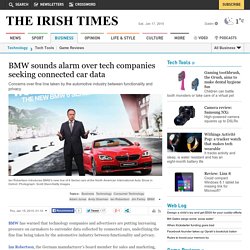 Ian Robertson, the German manufacturer’s board member for sales and marketing, said every car rolling off its production lines now offered some form of wireless connectivity – which can yield information about location, speed, acceleration, even the occupants of the car. “There’s plenty of people out there saying, ‘Give us all the data you’ve got and we can tell you what we can do with it’,” he said on the sidelines of the Detroit motor show, adding that this included “Silicon Valley” companies, as well as advertising groups.

“And we’re saying, ‘No thank you’.” About two-thirds of cars now come kitted out with sensors and communications systems that can send and receive data. Open Source Application Software Companies content from The VAR Guy. As much as I wish the republican calendar had acquired a lasting following, it didn't. 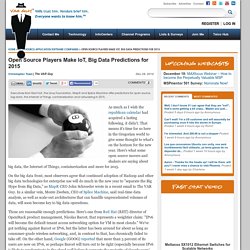 That means it's time for us here in the Gregorian world to give some thought to what's on the horizon for the new year. Here's what some open source movers and shakers are saying about big data, the Internet of Things, containerization and more for 2015. On the big data front, most observers agree that continued adoption of Hadoop and other big data technologies for enterprise use will do much in the new year to "separate the Big Hype from Big Data," as MapR CEO John Schroeder wrote in a recent email to The VAR Guy.

In a similar vein, Monte Zweben, CEO of Splice Machine, said real-time data analysis, as well as scale-out architectures that can handlle unprecedented volumes of data, will soon become key to big data operations. Those are reasonable enough predictions. Lastly (at least for today), bets are on from many quarters that the Internet of Things (IoT) is set to take off in 2015. What's holding back the car? The automobile has frequently been cited as the next major "platform" for mobile computing. 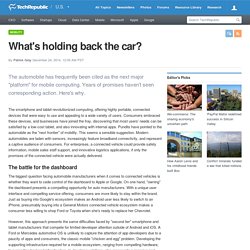 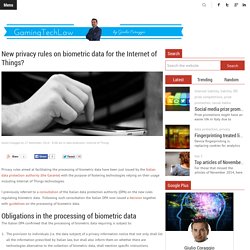 Giulio Coraggio on 27 November, 2014 - 8:08 am in data protection, Internet of Things Privacy rules aimed at facilitating the processing of biometric data have been just issued by the Italian data protection authority (the Garante) with the purpose of fostering technologies relying on their usage including Internet of Things technologies. I previously referred to a consultation of the Italian data protection authority (DPA) on the new rules regulating biometric data. Privacy Commissioner releases new Privacy Regulatory Action Policy. At the opening keynote of the IAPPANZ Summit, Australia's Privacy Commissioner Timothy Pilgrim announced the release of his office's new Privacy Regulatory Action Policy. 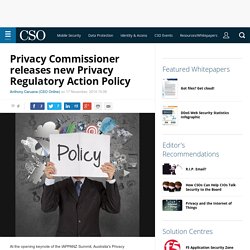 "This policy explains the range of regulatory powers available to me, and formalises the approach our office has been taking in using these powers," he said. According to Pilgrim, the new policy is not a significant departure from past regulation. " What it does is provide transparency about our existing approach, making it as clear as possible to organisations what our powers are, and what we see as our responsibilities in regards to using them," he explained. 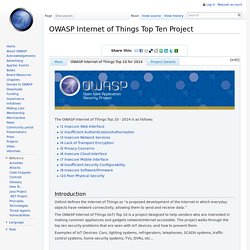 The OWASP Internet of Things (IoT) Top 10 is a project designed to help vendors who are interested in making common appliances and gadgets network/Internet accessible. The project walks through the top ten security problems that are seen with IoT devices, and how to prevent them. 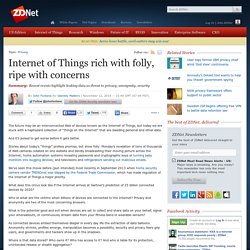 And it’s poised to get worse before it gets better. Stories about today’s “things” profess promise, but show folly: Monday’s revelation of tens of thousands of Web cameras collated on one website and blindly broadcasting their moving picture across the Internet; home automation systems revealing passwords and cryptographic keys or turning baby monitors into bugging devices; and televisions and refrigerators sending out malicious emails. Mass Personalization 2025 = Internet of Things + Mobile & Wearable Computing + Big Data Analytics + Intelligent Robots.

From Mass Production to Mass Personalization Since the earliest artisans offered items for sale, customization and price have been two important product characteristics to the consumer. 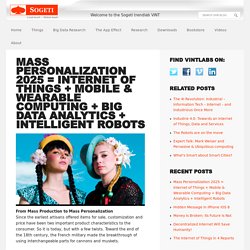 So it is today, but with a few twists. Forbes Data now being used in courtroom. Welcome to Forbes. European DPA’s (Deferred Prosecution Agreements) Give Privacy Recommendations to Stakeholders Regarding the “Internet of Things” FTC Chief: Privacy Principles Should Govern ‘Internet of Things' By Alexei Alexis Nov. 19 --Principles such as privacy by design should be adapted to the emerging world of Internet-connected appliances and other devices, given the potential for a new explosion of consumer data collection in coming years, Federal Trade Commission Chairwoman Edith Ramirez said Nov. 19.

The Zero Marginal Cost Society: The Internet of Things, the Collaborative Commons, and the Eclipse of Capitalism by Jeremy Rifkin Palgrave Macmillan, 356 pp., $28.00. Global Automakers and Alliance FTC Letter Commitment and Privacy Principle. Uk.businessinsider. BI Intelligence The Internet of Things (IoT) has been called the next Industrial Revolution — it will change the way all businesses, governments, and consumers interact with the physical world. For more than two years, BI Intelligence has closely tracked the growth of the IoT.

Specifically, we've analyzed how the IoT ecosystem enables entities (i.e. consumers, businesses, and governments) to connect to, and control, their IoT devices in 16 environments, including manufacturing, the connected home, transportation, and agriculture. In a new report from BI Intelligence, we discuss all of the components of the IoT ecosystem, including its devices, analytics, networks, and security. We also provide estimates and forecasts on the burgeoning IoT market, including device growth, amount invested, and potential return on investment. Here are some key points from the report: In total, we project there will be 34 billion devices connected to the internet by 2020, up from 10 billion in 2015. PS. Avec Watson, IBM développe le Dr House du futur. Ferez-vous davantage confiance à un ordinateur ou à un médecin diplômé pour diagnostiquer votre maladie et déterminer le meilleur traitement possible ?

HBR_How-Smart-Connected-Products-Are-Transforming-Competition. A road map to the future for the auto industry. Automakers took center stage at the 1964 New York World’s Fair. General Motors exhibited the Firebird IV concept car, which, as the company explained, “anticipates the day when the family will drive to the super-highway, turn over the car’s controls to an automatic, programmed guidance system and travel in comfort and absolute safety at more than twice the speed possible on today’s expressways.” Ford, by contrast, introduced a vehicle for the more immediate future: the Mustang. With an eye toward the segment that would later be named the baby boomers, the Ford Division’s general manager (a not-yet-40-year-old engineer named Lee Iacocca) explained that the car brought “total performance” to a “young America out to have a good time.” Ford estimated it would sell 100,000 Mustangs during that first year; in fact, it would sell more than 400,000.