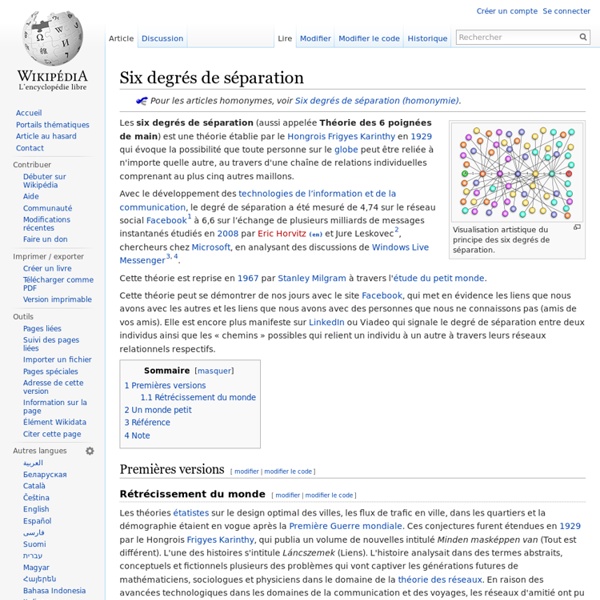 releases photos under a Creative Commons licence Licences specify the terms and conditions under which things can be used. All too frequently in everyday life we come across restrictive licences that actually seem to discourage usage, disallowing copying or sharing. But a whole other family of free licences aim to encourage use and sharing, asking simply for proper recognition and reciprocal behaviour in return. Since its inception, CERN has used the web to share multimedia material openly. To signal clearly that we wanted people to use our photos and videos we crafted a pioneering free media licence. It included clauses that satisfied the demands of being an intergovernmental organization, and ensured consistency with our founding convention as a peaceful scientific collaboration.

Small world phenomenon The small world phenomenon (also known as the small world effect) is the hypothesis that everyone in the world can be reached through a short chain of social acquaintances. The concept gave rise to the famous phrase six degrees of separation after a 1967 small world experiment by social psychologist Stanley Milgram which suggested that two random US citizens were connected on average by a chain of six acquaintances. However, after more than thirty years its status as a description of heterogeneous social networks (such as the aforementioned "everyone in the world") still remains an open question. Little research has been done in this area since the publication of the original paper.

Mediation - Introduction (Official City of Bellevue Website) What is Mediation? Mediation is a voluntary process in which people in dispute meet with a neutral third party (a "mediator") who guides them through a structured and confidential negotiation. The goals of mediation include: How the Web Became Our ‘External Brain,’ and What It Means for Our Kids Recently, my two-year-old nephew Benjamin came across a copy of Vanity Fair abandoned on the floor. His eyes scanned the glossy cover, which shone less fiercely than the iPad he is used to but had a faint luster of its own. I watched his pudgy thumb and index finger pinch together and spread apart on Bradley Cooper’s smiling mug. At last, Benjamin looked over at me, flummoxed and frustrated, as though to say, “This thing’s broken.”

Lessig, Liberation Music, and the issue of “fair use” The issue of “fair use” in relation to copyright in sound recordings came sharply into focus recently when Australian music label Liberation Music found itself as the defendant in a law suit filed in the US District Court in Massachusetts by a Harvard Law Professor, Lawrence Lessig. Lessig is suing Liberation on the basis of provisions in US copyright legislation that seek to prevent copyright owners from making threats to alleged copyright infringers without proper basis. Lessig’s suit is actually a further step in what has been an interesting example of the use of copyright protection measures used in relation to You Tube material. Towards a Global Brain Heylighen F. (1997): "Towards a Global Brain. Integrating Individuals into the World-Wide Electronic Network", in: Der Sinn der Sinne, Uta Brandes & Claudia Neumann (Ed.) (Steidl Verlag, Göttingen) [in press] Contents

Information held in electronic databases not property which can be possessed, rules UK court The Court of Appeal rejected arguments to the contrary and refused to interpret existing laws in a manner which would, it admitted, "have the beneficial effect of extending the protection of property rights in a way that would take account of recent technological developments". The judges said that whilst it is possible to exert control over electronic information it is not possible to gain possession of it. The distinction was drawn in a case concerning a dispute between a publisher and an IT supplier.

Google Consciousness Explained. By Rome Viharo for Google Consciousness Daniel Dennett’s model of consciousness in his landmark book "Consciousness Explained" deconstructs the ‘I’ experience down to ‘homunculi’ competing in the brain, each one a bit more stupid than the next until you get a ‘neuron’. That neuron he likens to a machine - but only in the sense that he wishes not to declare that there is *wonder tissue* that somehow has a magical property, but a machine that flows information. Medium, or ‘meat’ is irrelevant. Any simulation of the process should produce consciousness. Ironically enough, the way he describes how this competition happens amongst the homunculi - this process ‘flow’ in the brain is remarkably identical to how you could map search, SEO and PageRank on Google.

LANGUAGE POLITICS AND FRENCH SIGN WARS IN QUEBEC - REVISITED QUEBEC COURT CONFIRMS FRENCH LANGUAGE WATCHDOG CANNOT BITE ENGLISH TRADEMARKS - Canadian Intellectual Property Blog By Scott Miller, April 10, 2014 On April 9, 2014, the Superior Court in Quebec in Best Buy Stores Ltd. et al v. Quebec (Attorney General) (2014) QCCS 1427, confirmed that the Quebec language watchdog, the Office Québécois de la langue française (OQFL) attempt to cause retailers to modify their brand names to include French signage was contrary to the existing language laws of Quebec. This case is a huge victory for all businesses that wish to maintain brand recognition by using English trademarks in Quebec (ie. Best Buy, The Gap, Costco, Toys R Us, Wal-mart) and not be forced to translate them into French. Section 58 of the Charter of the French Language (French Charter), reads, "public signs and posters and commercial advertising must be in French".