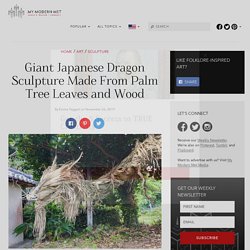 Each year, people showcase their talents by creating works that are often made from natural materials found in their local environment. One creation in particular stood out during this year’s festivities—a huge dragon sculpture crafted by Japanese artist and designer Ayako. Titled Ryu Miyagi, the giant sculpture is made from wood and straw sourced from Chinese fan palm. The massive mythical beast is posed to appear as though it’s peering through the window of a small village home. For this impressive piece, the artist has taken inspiration from Ryūgū-jō, an undersea palace from Japanese folklore that's ruled by Ryujin (the dragon kami of the sea). You can find out much more about The Shimadakara arts festival on their website. h/t: [Design You Trust] All images via shiromadara.

Expresses solidarity with Japan as fire rips through World Heritage site in Okinawa. UNESCO offers its sincere solidarity with the people of Japan, and in particular the residents of Okinawa, who have lost a cultural and historical symbol of the Ryukyu islands. 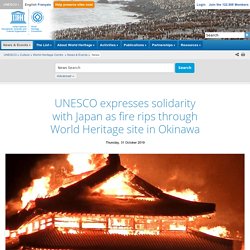 UNESCO stands ready to assist the authorities as needed. In the early morning hours of 31 October, a number of buildings, including Shuri Castle of the World Heritage site of “Gusuku Sites and Related Properties of the Kingdom of Ryukyu” (Japan) were damaged by a large fire. Damaged buildings, including three main halls, were reconstructed after World War II, as they were previously destroyed during the war.

This work was based on detailed documentation of the original and was noted in the World Heritage inscription as respecting the authenticity. The authorities already announced that they will rehabilitate and reconstruct the damaged structures. This UNESCO World Heritage site represents 500 years of Ryukyuan history (12th-17th century) in a group of sites and monuments. Memory of the Camps (1985) Sixty years ago, in the spring of 1945, Allied forces liberating Europe found evidence of atrocities which have tortured the world's conscience ever since. 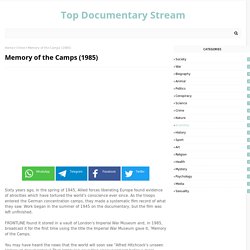 As the troops entered the German concentration camps, they made a systematic film record of what they saw. Work began in the summer of 1945 on the documentary, but the film was left unfinished. FRONTLINE found it stored in a vault of London's Imperial War Museum and, in 1985, broadcast it for the first time using the title the Imperial War Museum gave it, 'Memory of the Camps.

You may have heard the news that the world will soon see "Alfred Hitchcock's unseen Holocaust documentary. " That intriguing sounding announcement belies a more complicated reality. Amazing Secret Islands Around the World (PHOTOS) Upgrade now! 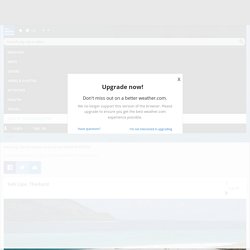 Don't miss out on a better weather.com. We no longer support this version of the browser. Please upgrade to ensure you get the best weather.com experience possible. Have questions? I'm not interested in upgrading Travel Amazing Secret Islands Around the World (PHOTOS) By Simone M. Aug 21 2015 12:00 AM EDT weather.com Koh Lipe, Thailand 1 of 37 Advertisement Koh Lipe is one of Thailand's tiniest islands.

In Okinawa Kuroshio Sea - 2nd largest aquarium tank in the world. Okinawan Longevity and Health. Japan's new 'girl band', average age 84. They joke about knocking on heaven’s door, but a Japanese ‘girl band’ with an average age of 84 have struck a blow for grannies everywhere by becoming pop idols. 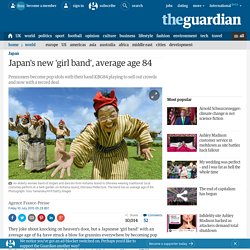 Hailing from the remote, coral-fringed island of Kohama in Okinawa, KBG84 – a play on the name of saccharine teeny boppers AKB48 – admit to being slightly bemused by their success after cutting their first disc and completing a sellout Japan tour. “When I first heard someone call us ‘idols’ I thought an idol meant someone who had lived a long life and was at the gates of heaven,” pint-sized diva Tomi Menaka, 92, told AFP in a herb garden overlooking Kohama’s turquoise sea.

“But in Tokyo they told me it was an entertainer – which was a relief because I thought it meant I was on my way to heaven,” she added, picking up steam as her fellow group members collapsed in fits of giggles. “I hadn’t even been to Tokyo or Osaka. I wanted to go there before I went to heaven.” “We felt like stars in Tokyo,” said 86-year-old Hideko Kedamori. KBG84（小浜島ばあちゃん合唱団）「Come on and Dance 小浜島」