Photos from Veronika Sergejeva's post in Ретро/Vintage изображения. Queen & David Bowie - Under Pressure (Classic Queen Mix) Queen - Somebody to Love [High Definition] Why 'Bohemian Rhapsody' Is The Best Song Ever Written. Freddie Mercury's complex relationship with Zanzibar. Media playback is unsupported on your device With the release of a new film about the British rock band Queen, the spotlight has fallen again on the life of its legendary lead singer, Freddie Mercury. 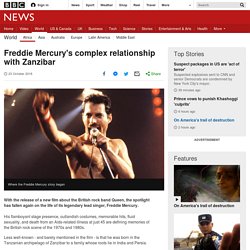 His flamboyant stage presence, outlandish costumes, memorable hits, fluid sexuality, and death from an Aids-related illness at just 45 are defining memories of the British rock scene of the 1970s and 1980s. Less well-known - and barely mentioned in the film - is that he was born in the Tanzanian archipelago of Zanzibar to a family whose roots lie in India and Persia. Here are five things you should know about Freddie Mercury and Zanzibar, a conservative Muslim society: He was born Farrokh Bulsara Mercury was born in Zanzibar's Government Hospital on 5 September 1946.

Image copyright Getty Images Bomi Bulsara came from Bulsar in Gujarat - hence the family name - and moved to Zanzibar to work in the High Court as a cashier for the British government. Freddie Mercury's family faith: The ancient religion of Zoroastrianism. In the Freddie Mercury biopic, “Bohemian Rhapsody,” there’s a scene in which a family member scolds Mercury. 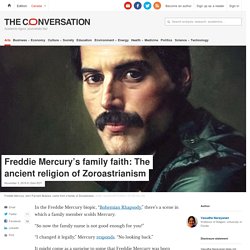 “So now the family name is not good enough for you?” “I changed it legally,” Mercury responds. “No looking back.” It might come as a surprise to some that Freddie Mercury was born Farrokh Bulsara. He came from a Parsi family that had roots in India and he was a Zoroastrian by faith. In the world religion courses I teach at the University of Florida, we discuss Zoroastrianism. Fleeing religious persecution from Muslims in Persia sometime between the seventh and 10th centuries, the Zoroastrians settled in India, where they came to be called “Parsis.” Like Freddie Mercury, they worked to integrate into their new surroundings.

A precursor for Christianity? The Zoroastrian faith is one of the world’s oldest religions, one that could date back as far as 1200 B.C. Zoroaster, a prophet who lived in modern-day Iran, is viewed as the founder of Zoroastrianism. Candid Photos Celebrate the Love of Freddie Mercury and Jim Hutton. The late singer Freddie Mercury is known for his amazing and unforgettable voice. 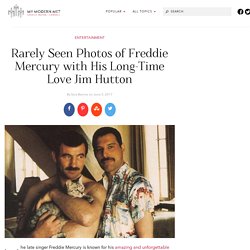 He’s also remembered for his battle with AIDS, which he was diagnosed with in 1987 and died from complications of in 1991. Although the world lost Mercury too soon, he was not alone when he passed away. From 1985 to his death, Mercury was accompanied by his partner Jim Hutton. It was Mercury who first pursued Hutton after meeting him in a club in 1984. Mercury offered to buy him a drink, but Hutton (unaware of Mercury's fame) said no; he was with someone at the time.

Hutton remained dedicated to Mercury after he was diagnosed with AIDS—even though Mercury said he’d understand if they parted ways. The Science Behind Why Freddie Mercury's Voice Was So Damned Compelling. Scientists have studied the voice and vocals of one of the greats of pop music, Freddie Mercury of the band Queen. 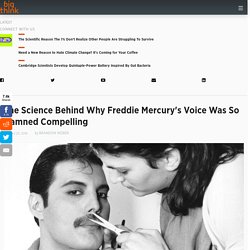 And the results? 1) He used subharmonics in a way that very few people can. Other than Tuvan Throat Singers, that is: (Also, listen for the subtle melody that accompanies the low-throated growl in this clip). That subharmonic vibration also helped give him his "growl," which he used quite frequently. 2) His vocals chords simply moved faster than those of most people. 3) It's been widely reported that Mercury could sing through 4 octaves, but this study could not back that up; at 12 semitones per octave, that would be 48 semitones.

Just listen to his amazing scat-style singing in the "isolated vocals" version of "Under Pressure" in the clip below, which Mercury's band Queen recorded with another great vocalist, David Bowie. Google Translate version "Bohemian Rhapsody" Freddie Mercury's Final Days (1991)