Are Too Many Students Taking AP Exams? : NPR Ed : NPR. How Schools Can Help Students Develop A Greater Sense Of Purpose. You're not going to believe what I'm about to tell you. Comics Blog Books Shop Comics: Random Most Popular All Cats Grammar Food Animals Tech This is a comic about the backfire effect.

Inspiration This comic was inspired by this three-part series on the backfire effect from the You Are Not So Smart Podcast. Other fun reading. How Schools Can Face The ‘Bad Habits’ That Inhibit Meaningful Changes. Teachers must ditch 'neuromyth' of learning styles, say scientists. Teaching children according to their individual “learning style” does not achieve better results and should be ditched by schools in favour of evidence-based practice, according to leading scientists. 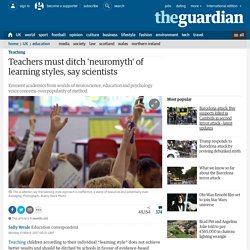 Thirty eminent academics from the worlds of neuroscience, education and psychology have signed a letter to the Guardian voicing their concern about the popularity of the learning style approach among some teachers. They say it is ineffective, a waste of resources and potentially even damaging as it can lead to a fixed approach that could impair pupils’ potential to apply or adapt themselves to different ways of learning. The group opposes the theory that learning is more effective if pupils are taught using an individual approach identified as their personal “learning style”.

Some pupils, for example, are identified as having a “listening” style and could therefore be taught with storytelling and discussion rather than written exercises. Acceptable Alternatives in Assessment and Grading. Assessment orthodoxy is easy, but for those trying to lead (whether by title or by influence) the transformation of assessment and grading practices, orthodoxy often falls short of inspiring or assisting teachers in moving away from antiquated practices. 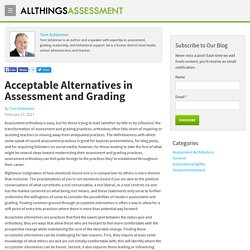 The definitiveness with which some speak of sound assessment practices is great for keynote presentations, for blog posts, and for acquiring followers on social media; however, for those looking to take the first of what might be several steps toward modernizing their assessment and grading practices, assessment orthodoxy can feel quite foreign to the practices they’ve established throughout their career. Righteous indignation of how standards-based one is in comparison to others is more divisive than inclusive. Here is one example. An acceptable alternative I’ve presented to many teachers, given the homework dilemma mentioned in the previous paragraph, is to grade homework temporarily.

References: Teachers back no-grade project. Teachers who are volunteering for a pilot project that will see some students in Squamish not receive letter grades are optimistic about the outcome. 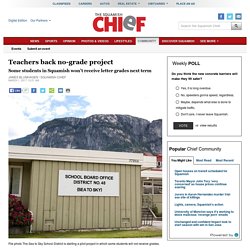 Starting next academic term, grades will become a thing of the past for some students in Grades 4 to 9 in School District 48. Serving Squamish, Whistler and Pemberton, the school board has recently voted to implement the Communicating Student Learning Pilot Project. Why Teaching Civics in America's Classrooms Must Be a Trump-Era Priority. Mike McQuade When I was about 10, a classmate in my small-town school in Latvia liked to tell me in between classes that he hated Jews. 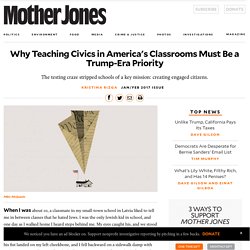 I was the only Jewish kid in school, and one day as I walked home I heard steps behind me. B.C. leads the push to eliminate letter grades from school report cards. When the school district in Maple Ridge, B.C., asked for volunteers to pilot a new report-card system that abandons traditional letter grades, officials expected a few schools to sign up. 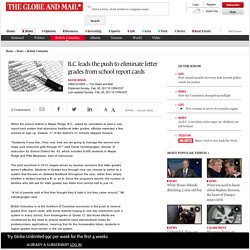 Instead, 17 of the district’s 21 schools stepped forward. “Suddenly it was like, ‘Holy cow, how are we going to manage the service and make sure everyone gets through it?’” Said David Vandergugten, director of instruction for School District No. 42, which includes 8,000 students in Maple Ridge and Pitts Meadows, east of Vancouver. The pilot launched in 2013, largely driven by teacher concerns that letter grades weren’t effective. Students in Grades four through nine can choose to switch to a system that focuses on detailed feedback throughout the year, rather than simply whether a student earned a B- or an A. What’s Going on Inside the Brain of a Bilingual Child? Part of our ongoing series exploring how the U.S. can educate the nearly 5 million students who are learning English. 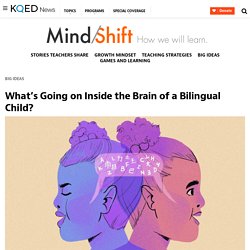 Brains, brains, brains. One thing we’ve learned at NPR Ed is that people are fascinated by brain research. And yet it can be hard to point to places where our education system is really making use of the latest neuroscience findings. Academia, Love Me Back – TIFFANY MARTÍNEZ. My name is Tiffany Martínez. 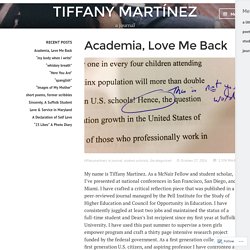 As a McNair Fellow and student scholar, I’ve presented at national conferences in San Francisco, San Diego, and Miami. I have crafted a critical reflection piece that was published in a peer-reviewed journal managed by the Pell Institute for the Study of Higher Education and Council for Opportunity in Education. I have consistently juggled at least two jobs and maintained the status of a full-time student and Dean’s list recipient since my first year at Suffolk University. I have used this past summer to supervise a teen girls empower program and craft a thirty page intensive research project funded by the federal government. As a first generation college student, first generation U.S. citizen, and aspiring professor I have confronted a number of obstacles in order to earn every accomplishment and award I have accumulated.

THE PEOPLE VS THE SCHOOL SYSTEM. Why A School’s Master Schedule Is A Powerful Enabler of Change. When Jerry Smith became a principal six years ago he had been teaching for 22 years, so his administrative style is firmly rooted in the belief that the important stuff goes on in classrooms. 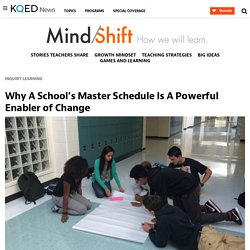 When he took over Luella High School outside Atlanta, he began thinking about how he could propel fundamental change in what was then a traditional comprehensive high school. When a third of the students and a big chunk of the staff relocated to a new high school the district opened to ease crowding at Luella, Smith knew the moment was ripe for even bigger shifts.

“We said we’re going to put anything and everything on the table and try to do this differently,” Smith said. How to Incorporate Immigration Studies into High School Curriculum. Why I regret letting my teen sign up for an AP course. (iStock) It was 11 p.m., and I was preparing to go to bed, when I noticed the light under my 15-year-old son’s door. 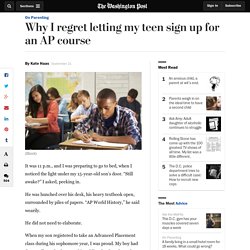 “Still awake?” I asked, peeking in. The Difference Between Rationality and Intelligence. Photo. The myth of the straight-A student, and 6 ways to debunk it.