Cite This For Me: Harvard, APA, MLA Reference Generator 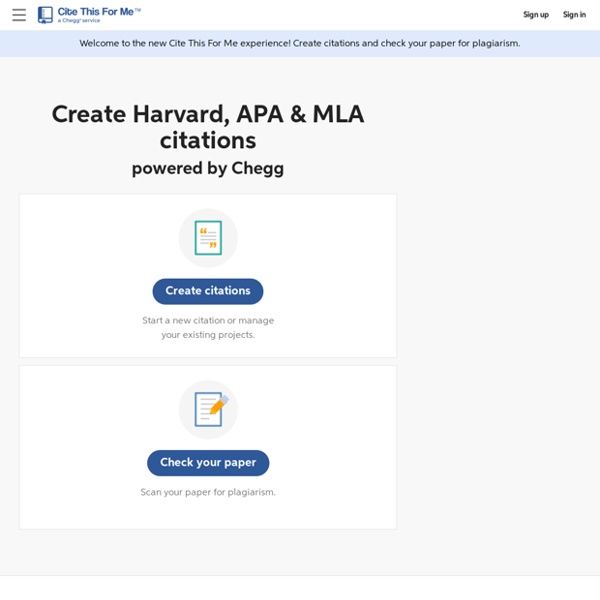 How to Cite an Online Associated Press Article The Associated Press is an international news association that writes and sells content to newspapers around the globe. Usually, when an article has originated from the Associated Press, it is simply credited to the organization instead of to a specific author. This means that associated press articles accessed online should list "Associated Press" as the author. The American Psychological Association (APA), Modern Language Association (MLA) and Chicago Manual of Style all call for slightly different formats for the citation of online newspaper articles. Step 1 Format your citation in the following manner if you are using MLA style: Author.

Becoming an Upstander - Together Against Bullying - Together Against Bullying More Becoming an Upstander Becoming an Upstander. Move from silence to action. Bystanders contribute to the problem. Harvard Reference Generator Tool: Harvard/APA Referencing created for essays, reports and dissertations About This Tool If you're a student and have ever had to write Reports, Essays or Theses, you will have had to reference what you have used in your report. If you mention something that someone else has written, you need to give them credit by referencing them. The Harvard Referencing System is one of the preferred layouts for these references. It is a relatively strict way of arranging the bibliographical information. This tool takes in the raw information - author, title, year of publication - and creates the reference in the correct form.

Google+ officially splits into Photos and Streams Google is splitting Google+ apart, breaking the social network's photo element away from what it's now calling "Streams." Bradley Horowitz, a longtime Google VP of product, announced that he had become the new lead for both new products, Google Photos and Streams, in a post on Google+ today. Horowitz steps into the role vacated by David Besbris, who took over the top job at Google+ less than a year ago. Hangouts will continue on Research and Citation If you are having trouble locating a specific resource please visit the search page or the Site Map. Conducting Research These OWL resources will help you conduct research using primary source methods, such as interviews and observations, and secondary source methods, such as books, journals, and the Internet. This area also includes materials on evaluating research sources. Using Research

Resources and Lesson Plans for Edutopia Social and Emotional Learning Kentucky's Jefferson County school district shares details about administration, school culture, professional development, and curriculum -- materials that you may adapt for your class or school. Click on any of the titles below to download a PDF of one of Jefferson County Public Schools' resources for success. PDF files can be viewed on a wide variety of platforms -- both as a browser plug-in or a stand-alone application -- with Adobe's free Acrobat Reader program. How to Cite Social Media in APA Style (Twitter, Facebook, and Google+) by Chelsea Lee Thanks to developments in technology and feedback from our users, the APA Style team has updated the formats for citing social media, including content from Twitter, Facebook, and Google+. These guidelines are the same as you’ll find in our APA Style Guide to Electronic References, Sixth Edition (available in PDF and Kindle formats).

Scripts - New Visions CloudLab New Visions' Script Gallery Prior to March 2014 Apps Scripts for Google Sheets were installed and via a "locally-attached copy" made available to users through the "Script Gallery." Since then, Google has made big changes to scripts, most visibly by creating a new way of distributing them as Add-ons for Docs -- in which all users run from a single, developer-maintained copy of the codebase. Add-ons are now available for Google Docs, Sheets, and Forms through three respective galleries in the Chrome Web Store. A number of our tools from the heyday of scripts have not been ported over to Add-ons framework, but they are still quite useful and fun perfectly fine in the NEW Google Sheets when run as local scripts.

How to Cite Multiple Pages From the Same Website by Timothy McAdoo Sometimes one's research relies on a very narrow thread of the World Wide Web. What do I mean? We are sometimes asked how to cite multiple web pages from the same website. “Can’t I just cite the entire website?” our efficiency-minded readers ask. TES collection - Primary PSHE Rating:4 average ratingLast Updated:25 November, 2012Section:Resources Friendship & relationships Experiencing friendships and developing an understanding of their meaning is crucial to children and young people’s sense of security and inclusion both in school and at home. TES resources has plenty of material to support learning and development in this area, as shared by the teaching community.