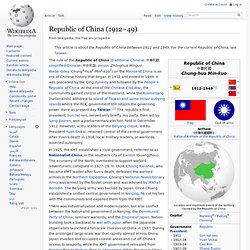 It was preceded by the Qing dynasty and followed by the People's Republic of China. At the end of the Chinese Civil War, the communists gained control of the mainland, while the Kuomintang (nationalists) withdrew to Island of Taiwan and some minor outlying islands where the ROC government still retains the governing power there as present day Taiwan. [2] The republic's first president, Sun Yat-sen, served only briefly. His party, then led by Song Jiaoren, won a parliamentary election held in December 1912. History of the Republic of China. Flag of the ROC (1928–present), Blue Sky, White Sun with 12 rays, and Wholly Red field. 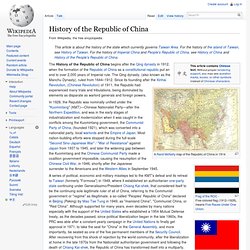 Early republic (1912–1916)[edit] Founding of the republic[edit] Three different flags were originally used during the Revolution. History of the People's Republic of China. Peoples Republic of China. Communists, Nationalists, and China's Revolutions: Crash Course World History #37. Chairman Mao's Underground City. In 1969, Chairman Mao commanded the construction of a second Beijing beneath the surface of the original city, designed to accommodate all six million of its then inhabitants, so that if nuclear war did kick off, folk would still have somewhere to hang out and play Mah Jong while the rest of us burnt to death in a shower of atomic rain. 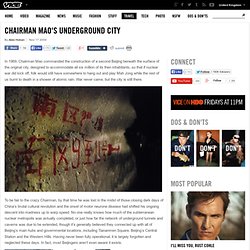 War never came, but the city is still there. To be fair to the crazy Chairman, by that time he was lost in the midst of those closing dark days of China’s brutal cultural revolution and the onset of motor neurone disease had shifted his ongoing descent into madness up to warp speed. No one really knows how much of the subterranean nuclear metropolis was actually completed, or just how far the network of underground tunnels and caverns was due to be extended, though it’s generally believed they connected up with all of Beijing’s main hubs and governmental locations, including Tiananmen Square, Beijing’s Central Station and the Western Hills. Look! China’s Cultural Revolution: Rewriting a Nation. China’s Cultural Revolution: Red Guard and Purges. Stuff You Missed in History Class: The Podcast. China History. RHG_New Realities_29April2014.pdf. China's Instagram and Other Tech Startups Look West. Instagram, the photo-sharing app bought by Facebook (FB) last year, offers special effects that can give pictures a weathered black-and-white cast or retro tints. 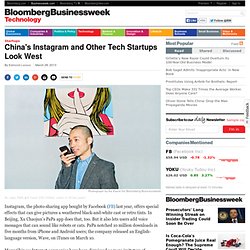 In Beijing, Xu Chaojun’s PaPa app does that, too. But it also lets users add voice messages that can sound like robots or cats. PaPa notched 10 million downloads in five months from iPhone and Android users; the company released an English-language version, Wave, on iTunes on March 10. Many Chinese Internet companies have been dismissed as mere imitators of successful U.S. enterprises, such as YouTube clone Youku (YOKU), and they’re often content to profit from their vast home market.

But Xu’s firm and others aim to compete globally. The companies Lee says are closest to that kind of success—two years away, he predicts—aren’t exactly startups. Innovation Works, founded in September 2009, manages $500 million in assets, including funding from YouTube co-founder Steve Chen and Foxconn. China Dream. China Dream The China Dream project seeks to reimagine prosperity and reshape consumerism in China. 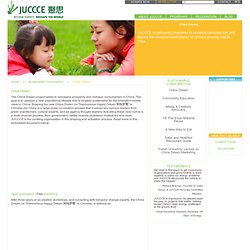 The goal is to catalyze a new aspirational lifestyle that is innately sustainable for the emergent middle class in China. Shaping the new China Dream (or "Harmonious Happy Dream 和悦梦想" in Chinese) for China is a large-scale co-creation process that involves key opinion leaders from green practitioners, cultural experts, and ad agency thought leaders. Activating these new norms is a multi-channel process, from government, media, brands, academic institutions and more. JUCCCE is the curating organization in this shaping and activation process.

China’s Economic Empire. Alkis Konstantinidis/European Pressphoto Agency A heavy load carrier moored at the terminal of the Chinese shipping company Cosco, carrying five cranes for the expansion of the terminal in Piraeus, Greece. Europeans and Americans tend to fret over Beijing’s assertiveness in the South China Sea, its territorial disputes with Japan, and cyberattacks on Western firms, but all of this is much less important than a phenomenon that is less visible but more disturbing: the aggressive worldwide push of Chinese state capitalism. By buying companies, exploiting natural resources, building infrastructure and giving loans all over the world, China is pursuing a soft but unstoppable form of economic domination. Ultimately, thanks to the deposits of over a billion Chinese savers, China Inc. has been able to acquire strategic assets worldwide. China has become the world’s leading exporter; it also surpassed the United States as the world’s biggest trading nation in 2012.