Individual Beef Wellingtons with Mushroom, Spinach & Blue Cheese Filling. Prepare the pastry and fillings: Roll and cut the pastry—Roll out each of the six pastry sheets to about 3/16-inch thick and, using a sharp knife, cut out a 10-inch round from each. 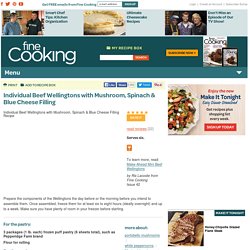 From the scraps, cut out 12 leaves or other shapes to use as decoration. Layer the pastry rounds (and the decorations) between pieces of waxed paper or parchment, wrap the bundle well in plastic, and freeze again. Cook the mushrooms—In a shallow bowl, toss the portabellas with the oil, garlic, thyme, and rosemary; cover and marinate in the refrigerator for 2 hours. Remove the portabellas from the marinade (they will have soaked up most of it) and season with salt and pepper. Caramelize the onions—Melt the butter in a heavy sauté pan over medium heat. Prepare the spinach and cheese—Wash the spinach well and remove any stems. Squeeze and squeeze again—until the spinach for your filling is as dry as it can be. Sear the filets—Season each portion of meat very generously on both sides with salt and pepper. Roastbeef in der Salzkruste. Kalbsmedaillons mit Morchelhaube. 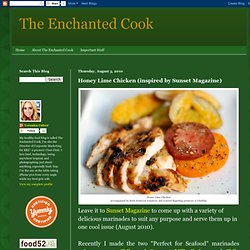 Recently I made the two "Perfect for Seafood" marinades - Lemongrass, Chile and Coconut Milk Shrimp and Chile Ginger Shrimp. Both were fantastic, so this time I decided to try the honey lime marinade from the "Perfect for Chicken" section and I was very pleased with the outcome.It doesn't get any easier than this - 5 simple ingredients (not including the salt and pepper), marinade overnight, and throw on the grill. Chicken Teriyaki Recipe - Tasty Arbuz. If you love Chicken Teriyaki, this recipe will not leave you indifferent. 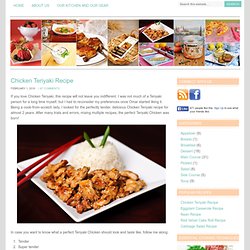 I was not much of a Teriyaki person for a long time myself, but I had to reconsider my preferences once Omar started liking it. Being a cook-from-scratch lady, I looked for the perfectly tender, delicious Chicken Teriyaki recipe for almost 2 years. After many trials and errors, mixing multiple recipes, the perfect Teriyaki Chicken was born! Idaho sunrise (baked eggs and bacon in potato bowls) » Gimme Some Oven. Idaho Sunrise (Baked Eggs & Bacon In Potato Bowls) Ok, what is up with eggs?!!? 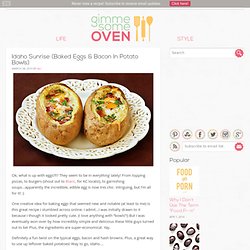 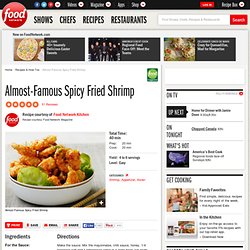 Prepare the shrimp: Heat about 2 inches of vegetable oil in a heavy-bottomed pot or Dutch oven over medium heat until a deep-fry thermometer registers 350 degrees. Meanwhile, whisk the eggs in a shallow bowl. Whisk the flour, cornstarch and 1 teaspoon each salt and pepper in another shallow bowl. Working in batches, dredge the shrimp in the flour mixture, shaking off any excess, dip in the beaten eggs, then return to the flour mixture, turning to form a thick crust. 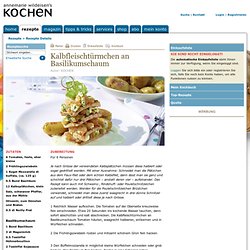 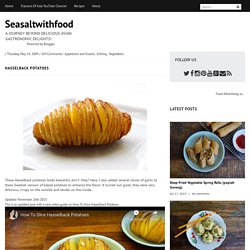 Here, I also added several cloves of garlic to these Swedish version of baked potatoes to enhance the flavor. It turned out great, they were very delicious, crispy on the outside and tender on the inside.. Updated: November 26th 2013 This is an updated post with a new video guide on How To Slice Hasselback Potatoes Hasselback Potatoes. My Adventures In The Country. When I heard this month’s Kitchen Bootcamp Challenge was potatoes, I was pumped. 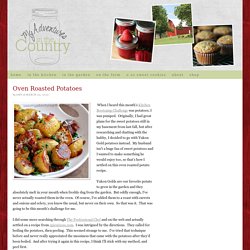 Originally, I had great plans for the sweet potatoes still in my basement from last fall, but after researching and chatting with the hubby, I decided to go with Yukon Gold potatoes instead. My husband isn’t a huge fan of sweet potatoes and I wanted to make something he would enjoy too, so that’s how I settled on this oven roasted potato recipe.

Yukon Golds are our favorite potato to grow in the garden and they absolutely melt in your mouth when freshly dug from the garden. Pesto Baked Potatoes. It’s a public secret I like to use a lot of fresh herbs when I’m cooking. 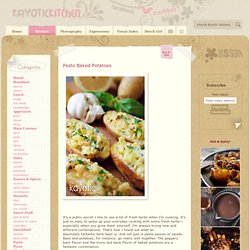 It’s just so easy to spike up your everyday cooking with some fresh herbs—especially when you grow them yourself. I’m always trying new and different combinations. That’s how I found out what an absolutely fantastic herb basil is. And not just in pasta sauces or salads. Gefüllte Pouletschnecken am Spiess. Ueberbackene Pouletspiesse. Honey Lime Chicken (inspired by Sunset Magazine) Chicken Cordon Bleu Rollups. Thin slices of chicken, ham, and cheese are rolled up, covered in bread crumbs, and baked until crisp, then topped with a homemade parmesan pepper sauce. 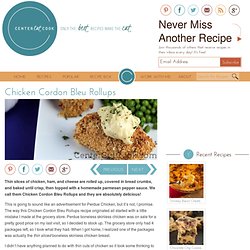 We call them Chicken Cordon Bleu Rollups and they are absolutely delicious! This is going to sound like an advertisement for Perdue Chicken, but it’s not, I promise. The way this Chicken Cordon Bleu Rollups recipe originated all started with a little mistake I made at the grocery store. Perdue boneless skinless chicken was on sale for a pretty good price on my last visit, so I decided to stock up. The grocery store only had 4 packages left, so I took what they had. I didn’t have anything planned to do with thin cuts of chicken so it took some thinking to figure out what to make. Chicken and Cheese Lasagna Roll-Ups - iVillage. Margarita Grilled Chicken Recipe.