Social Media’s Effect on Teens- Physically – Youth Voices. Social Media Addiction in Families: What is the Impact? In my house, we often go out with friends, family, or stay in for a family evening. 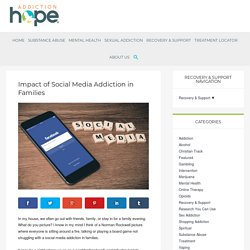 What do you picture? I know in my mind I think of a Norman Rockwell picture where everyone is sitting around a fire, talking or playing a board game not struggling with a social media addiction in families. It may be a night where we go on a neighborhood walk and talk about goals, dreams and our day. In reality though, family nights or activities are heavily enveloped with technology. According to a study on media influence, conducted by the Kaiser Family Foundation, found that kids ages 8-18 years old spent over 7 hours a day using electronic media [3].

That equals up to 50 hours per week in front of a screen. Impact of Social Media on Self-Esteem. Many parents worry about how exposure to technology might affect toddlers developmentally. We know our preschoolers are picking up new social and cognitive skills at a stunning pace, and we don’t want hours spent glued to an iPad to impede that.

But adolescence is an equally important period of rapid development, and too few of us are paying attention to how our teenagers’ use of technology—much more intense and intimate than a 3-year-old playing with dad’s iPhone—is affecting them. In fact, experts worry that the social media and text messages that have become so integral to teenage life are promoting anxiety and lowering self-esteem. Young people report that there might be good reason to worry. How Social Media Is Taking Away from Your Friendships. Nobody is a stranger to deep diving into the Facebook rabbit hole. 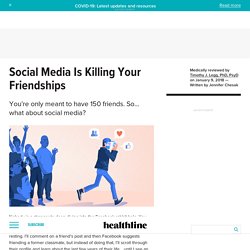 You know the scenario. For me, it’s a Tuesday night and I’m unwinding in bed, mindlessly scrolling “just a little,” when half an hour later, I’m no closer to resting. I’ll comment on a friend’s post and then Facebook suggests friending a former classmate, but instead of doing that, I’ll scroll through their profile and learn about the last few years of their life… until I see an article that sends me down a research spiral and a comment section that leaves my brain on hyperdrive. The next morning, I wake up feeling drained. Maybe the blue light that illuminates our faces as we scroll through feeds and friends is to blame for disrupting our sleep cycle. Maybe, as we tell ourselves that we’re online to stay connected, we’re unknowingly draining our social energy for in-person interactions. There’s a capacity for friendships, even online The second constraint is time. Social Media and Teens: How Does Social Media Affect Mental Health?

How removing ‘likes’ from Instagram could affect our mental health. Today, 500 million people will check their Instagram. 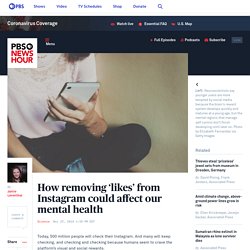 And many will keep checking, and checking and checking because humans seem to crave the platform’s visual and social rewards. But excessive social media use can be problematic, leading to sleep disruption, productivity loss and interpersonal conflicts. Understanding Addiction. A Harvard Health article New Insights into the Causes of Addiction Addiction involves craving for something intensely, loss of control over its use, and continuing involvement with it despite adverse consequences. Addiction changes the brain, first by subverting the way it registers pleasure and then by corrupting other normal drives such as learning and motivation.

Although breaking an addiction is tough, it can be done. What causes addiction? The word “addiction” is derived from a Latin term for “enslaved by” or “bound to.” Addiction exerts a long and powerful influence on the brain that manifests in three distinct ways: craving for the object of addiction, loss of control over its use, and continuing involvement with it despite adverse consequences. For many years, experts believed that only alcohol and powerful drugs could cause addiction. Is Your Cell Phone Killing Your Back. Millions of people do it throughout the day and are totally unaware that cell phone use can be detrimental to the back. 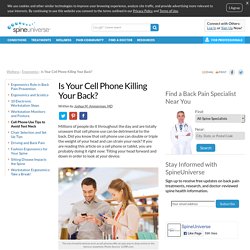 Did you know that cell phone use can double or triple the weight of your head and can strain your neck? If you are reading this article on a cell phone or tablet, you are probably doing it right now: Tilting your head forward and down in order to look at your device. Cell phones and tablets are changing the way we access information and entertainment. The use of these devices influences our posture and body mechanics in unhealthy ways that contribute to neck, upper back, shoulder, and arm pain. Furthermore, poor posture while sitting, standing, walking, or in a static position can lead to more than upper body pain and stiffness—poor posture affects other parts of the spine, such as the middle and low back. Dopamine: What It Is & What It Does. Translational Psychiatry: "Effects of dopamine D2/D3 receptor antagonism on human planning and spatial working memory. 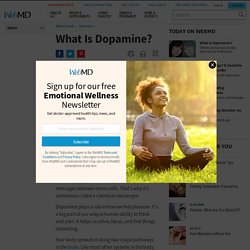 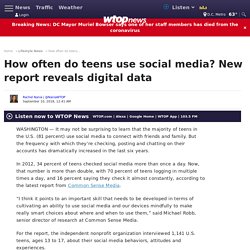 The results may not be what one might expect. WASHINGTON — It may not be surprising to learn that the majority of teens in the U.S. (81 percent) use social media to connect with friends and family. But the frequency with which they’re checking, posting and chatting on their accounts has dramatically increased in the last six years. In 2012, 34 percent of teens checked social media more than once a day.

Now, that number is more than double, with 70 percent of teens logging in multiple times a day, and 16 percent saying they check it almost constantly, according to the latest report from Common Sense Media. Teens, Social Media & Technology 2018. Until recently, Facebook had dominated the social media landscape among America’s youth – but it is no longer the most popular online platform among teens, according to a new Pew Research Center survey. 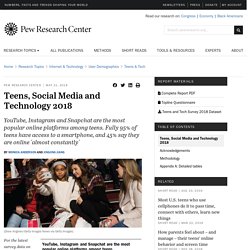 Today, roughly half (51%) of U.S. teens ages 13 to 17 say they use Facebook, notably lower than the shares who use YouTube, Instagram or Snapchat. This shift in teens’ social media use is just one example of how the technology landscape for young people has evolved since the Center’s last survey of teens and technology use in 2014-2015. Most notably, smartphone ownership has become a nearly ubiquitous element of teen life: 95% of teens now report they have a smartphone or access to one.

These mobile connections are in turn fueling more-persistent online activities: 45% of teens now say they are online on a near-constant basis. This is Your Brain on Instagram: Effects of Social Media on the Brain – Now. Powered by Northrop Grumman. In the last 15 years, social media has become such a pervasive part of our lives that we don’t even notice how much time we’re spending on it. 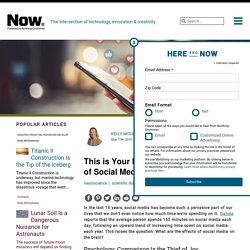 Statista reports that the average person spends 135 minutes on social media each day, following an upward trend of increasing time spent on social media each year. This raises the question: What are the effects of social media on the brain? Psychology: Comparison Is the Thief of Joy. Group members supporting upset woman with drug addiction in rehab center. Dopamine word cloud. Photo Of Woman Lying Beside A Phon. 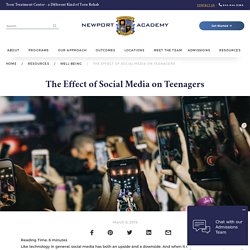 And when it comes to the effect of social media on teenagers, those pros and cons are particularly significant. On the plus side, platforms like Facebook, Twitter, Instagram, and Snapchat can be lifesavers for teens who feel isolated or marginalized. Teen Social Media Addiction – Shepherd's Hill Academy. The rise of social media. Teen Social Media Addiction – Shepherd's Hill Academy. Social Media Users — DataReportal – Global Digital Insights. Notes: ¹ These platforms have not published updated user figures in the past 12 months, so the user figures published here may not be as reliable as the user figures we’ve included for other platforms in this list. ² Snapchat and Twitter only publish daily active users (DAU) in their earnings announcements, as opposed to the monthly active user (MAU) figures published by other platforms. 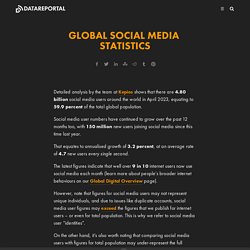 The figure we’ve reported here is based on the latest monthly advertising reach figures published in each platform’s respective self-service advertising tools, in order to provide a more equal basis for comparison. LinkedIn no longer publishes monthly active user figures, and its monthly advertising audience reach figures are based on total registered members, not monthly active users (MAUs). As a result, it’s difficult to identify how many active users LinkedIn has each month. How Social Media Effects Teenagers’ Mental Health. Social media is constantly running in the background of life. We can share, snap, tweet, like and reblog at all hours of the day. According to a British Psychological Society, approximately 90 percent of teenagers are on social media. Constantly seeing what their peers are doing on a day-to-day basis can be damaging to their mental health. Lara Jakobsons, PhD, Psychologist at NorthShore, discusses the effects that social media can have on teenagers’ mental health: Increased time, increased risk.