Have Children? Here’s How Kids Ruin Your Romantic Relationship. Lots of women look forward to motherhood – getting to know a tiny baby, raising a growing child, developing a relationship with a maturing son or daughter. 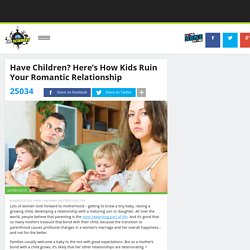 All over the world, people believe that parenting is the most rewarding part of life. And it’s good that so many mothers treasure that bond with their child, because the transition to parenthood causes profound changes in a woman’s marriage and her overall happiness… and not for the better. Families usually welcome a baby to the mix with great expectations.

Here's What It's Really Like to Tell Your Parents That You Don't Want Kids. More and more millennials are choosing to be childfree. 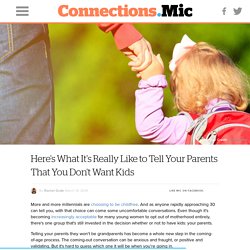 And as anyone rapidly approaching 30 can tell you, with that choice can come some uncomfortable conversations. Even though it's becoming increasingly acceptable for many young women to opt out of motherhood entirely, there's one group that's still invested in the decision whether or not to have kids: your parents. Telling your parents they won't be grandparents has become a whole new step in the coming-of-age process.

The coming-out conversation can be anxious and fraught, or positive and validating. A letter to … my mother, who won’t accept that we don’t want children. My husband and I don’t want to have kids. 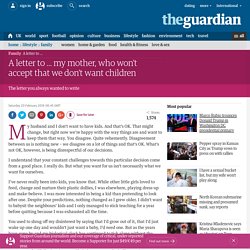 And that’s OK. That might change, but right now we’re happy with the way things are and want to keep them that way. You disagree. Quite vehemently. Disagreement between us is nothing new – we disagree on a lot of things and that’s OK. I understand that your constant challenges towards this particular decision come from a good place. I’ve never really been into kids, you know that. 30 abominables raisons de faire des enfants. À l’occasion de la Fête des Mères 2015, on ressort cet article publié il y a plusieurs années sur madmoiZelle. 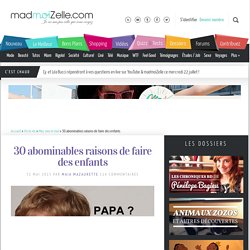 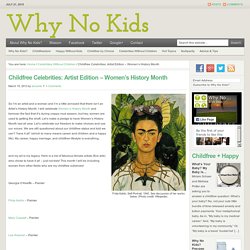 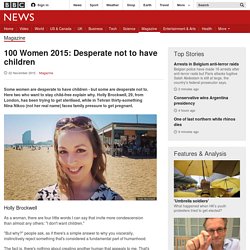 Here two who want to stay child-free explain why. Holly Brockwell, 29, from London, has been trying to get sterilised, while in Tehran thirty-something Nina Nikoo (not her real name) faces family pressure to get pregnant. Image copyright Holly Brockwell. Remaining childless can be wise and meaningful. The pope should know. Choosing not to have children is selfish, or so says the pope, who is surely something of an expert on this one, being childless himself. 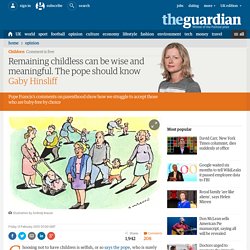 Reminiscing this week about his own upbringing as one of five, he told an audience in St Peter’s Square of his fears for a “greedy generation that doesn’t want to surround itself with children, that considers them above all worrisome, a weight, a risk”. Children, he argues, bring hope to society, rejuvenating and enriching all our lives. Perhaps they do. It’s just a shame the same cannot always be said of their parents. Jonathan Hall, a police community support officer from Cambridgeshire, shot briefly to fame this week after describing school-run mothers as “wailing and hissing” feral cats with hate-filled eyes and a complete disregard for double yellows, hell-bent on blocking the roads for everyone else.

But increasingly, childless men are viewed with suspicion. Science Says Having a Kid Is One of the Crappiest Things That Can Happen to You. Photo via Flickr user Bradley Gordon Did you come to VICE for in-depth coverage of parenting? 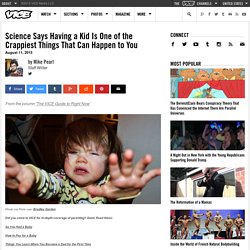 Good. Why We Should Stop Reproducing: An Interview with David Benatar on Anti-Natalism : The Critique. September 21, 2015 7:52 pmPublished by The Critique Picture: Flickr. 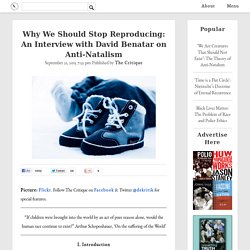 Follow The Critique on Facebook & Twitter @dekritik for special features. “If children were brought into the world by an act of pure reason alone, would the human race continue to exist?” Arthur Schopenhauer, ‘On the suffering of the World’ I. The recent debates over the excesses of political correctness on university campuses have compelled some people to propose a revisiting of “dangerous ideas” in public classrooms. As unsavoury as Peter Singer’s ideas may be to certain individuals, he is not the only philosopher (or bioethicist, for that matter) to hold views that some would consider meritorious of job loss and censorship.

II. . [1] Professor Benatar, thank you for participating in this interview. Benatar: I certainly was surprised. Hot Topics - Why No Kids. Could parents learn a thing or two from hunter-gatherers? 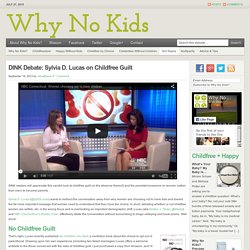 Perhaps. Aborigine Chief of Bathurst Island (Credit: Wikipedia) Why do some people not want children?