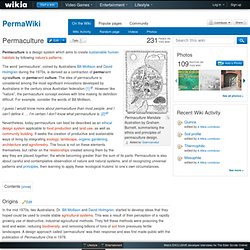 The word 'permaculture', coined by Australians Bill Mollison and David Holmgren during the 1970s, is derived as a contraction of permanent agriculture, or permanent culture. The idea of permaculture is considered among the most significant innovations developed by Australians in the century since Australian federation [1]. However like "nature", the permaculture concept evolves with time making its definition difficult. For example, consider the words of Bill Mollison, I guess I would know more about permaculture than most people, and I can't define it. ... Nevertheless, today permaculture can best be described as an ethical design system applicable to food production and land use, as well as community building. Origins Edit In the mid 1970s, two Australians, Dr. Permaculture has developed from its origins in Australia into an international 'movement'. Influences Edit Core values. 27 Life Hacks for Permaculture Living.

Want to design a better, earthier and more rewarding life with permaculture? 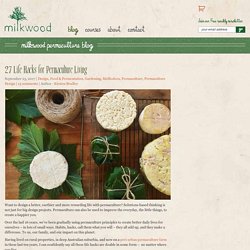 Solutions-based thinking is not just for big design projects. Permaculture can also be used to improve the everyday, the little things, to create a happier you. Over the last 10 years, we’ve been gradually using permaculture principles to create better daily lives for ourselves – in lots of small ways. Habits, hacks, call them what you will – they all add up, and they make a difference. To us, our family, and our impact on this planet. Having lived on rural properties, in deep Australian suburbia, and now on a peri-urban permaculture farm in these last ten years, I can confidently say all these life hacks are doable in some form – no matter where you live. Whether you do all of them – or just some, or one, or some others of your own, depends on where you’re at right now. ‘Start where you are, use what you have, do what you can…’ No big absolutes, no ‘must do’s’. Forming habits is not easy, and not often quick.

. | 1. How Does Permaculture Work? This is how Permaculture work While its a long ways from survey nature as an unfriendly adversary to be vanquished, permaculture likewise shouldn’t be confounded as an arrival to the times of searching for berries. 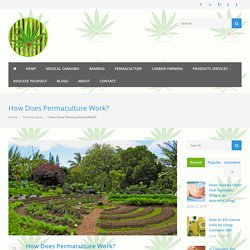 Think about a natural framework as a waterway. The point of permaculture is not to swim against the current or let it clear you feebly down the stream. Gaia Theory. The Gaia Paradigm While reading on about the science of Gaia Theory – below and throughout this website – consider the term “Gaia Paradigm.” 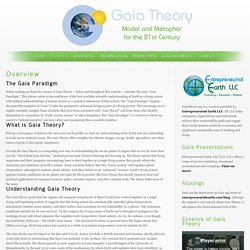 This phrase refers to the confluence of the best available scientific understanding of Earth as a living system with cultural understandings of human society as a seamless continuum of that system. The “Gaia Paradigm” employs the powerful metaphor of “Gaia” to take the perspective of human beings as part of a living system. This encourages us to explore scientific insights from scientists that have been associated with “Gaia Theory” and from those who identify themselves as researchers in “Earth system science” or other disciplines.

The “Gaia Paradigm” is a context in which our society’s “cultural narrative” can best reflect and incorporate these scientific realities. What is Gaia Theory? Pick up a newspaper or listen to the news and you’ll quickly see that our understanding of the Earth and our relationship to it has never mattered more. Permaculture. With its system of applied education, research and citizen- led design permaculture has grown a popular web of global networks and developed into a global social movement[citation needed]. 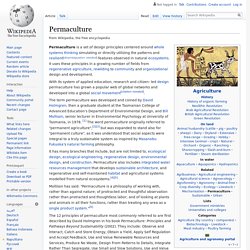 The term permaculture was developed and coined by David Holmgren, then a graduate student at the Tasmanian College of Advanced Education's Department of Environmental Design, and Bill Mollison, senior lecturer in Environmental Psychology at University of Tasmania, in 1978. [1] The word permaculture originally referred to "permanent agriculture",[3] but was expanded to stand also for "permanent culture", as it was understood that social aspects were integral to a truly sustainable system as inspired by Masanobu Fukuoka’s natural farming philosophy.

It has many branches that include, but are not limited to, ecological design, ecological engineering, regenerative design, environmental design, and construction. History[edit] Sustainability: Where Ecology And Opportunity Meet : 13.7: Cosmos And Culture. Hide caption Three girls model Dust Bowl masks to be worn in areas where the amount of dust in the air causes breathing difficulties, circa 1935. 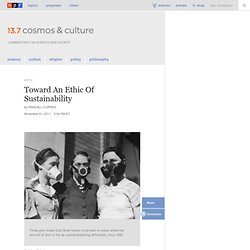 Bert Garai/Getty Images Today we have a guest post by Randall Curren, chair of the Philosophy Department at the University of Rochester. He holds a secondary appointment in the university's Warner School of Education. Curren has written extensively on the philosophical issues surrounding education and sustainability. Talk of sustainability is fashionable and more than a little freewheeling; but it's not just a fad. What unsustainability implies is that humanity is collectively living in such a way as to diminish opportunities to live well in the future. Permaculture: the ethics of gardening « Pennsylvania Echoes. A couple weeks ago I took a class on soil, and I learned quite a lot. 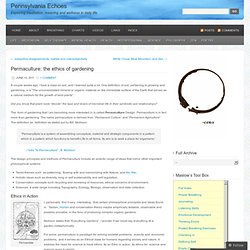 One definition of soil, pertaining to growing and gardening, is a “The unconsolidated mineral or organic material on the immediate surface of the Earth that serves as a natural medium for the growth of land plants”. Did you know that plant roots “decide” the type and levels of microbial life in their symbiotic soil relationships? The form of gardening that I am becoming more interested in is called Permaculture Design. Permaculture Principles.