Odd Emotions. There are at least 216 foreign words for positive emotional states and concepts that we don't have in English. One criticism levelled at positive psychology is that it takes an overly Western-centric view of the lighter side of human experience. 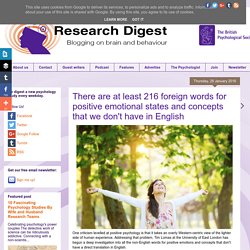 Addressing that problem, Tim Lomas at the University of East London has begun a deep investigation into all the non-English words for positive emotions and concepts that don't have a direct translation in English. Publishing his initial findings in the The Journal of Positive Psychology, Lomas' hope is not only that we might learn more about the positive psychology of other cultures, but that hearing of these words might enrich our own emotional lives. Of course there is a long-running debate about how much words influence our thoughts and emotions. Few people these days would advocate the idea that you can't feel an emotion if you don't have a word for it. Here Are 35 Brilliant Words That Should Absolutely Be A Part Of Your Everyday Vocabulary. 14. 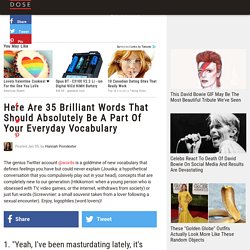 "Oh that douche? His backpfeifengesicht it asking for it. " Good luck pronouncing this one, folks. How does interoceptive awareness interact with the subjective experience of emotion? An fMRI study. Plutchik.emotion.theorie.POSTER.pdf. Reward Pays the Cost of Noise Reduction in Motor and Cognitive Control: Current Biology. Distinctive mood induction effects of fear or sadness on anger and aggressive behavior. 1Department of Psychology, Capital Normal University,CNU, China 2Queens College, the City University of New York, USA 3Zhejiang Normal University, China A recent study has reported that the successful implementation of cognitive regulation of emotion depends on higher-level cognitive functions, such as top-down control, which may be impaired in stressful situations. 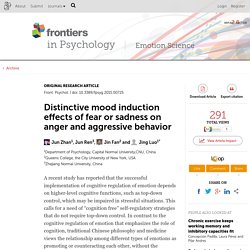 This calls for a need of “cognition free” self-regulatory strategies that do not require top-down control. How the brain tells good from bad. Eating a slice of chocolate cake or spending time with a friend usually stimulates positive feelings, while getting in a car accident or anticipating a difficult exam is more likely to generate a fearful or anxious response. 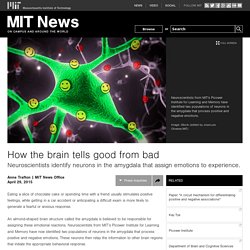 An almond-shaped brain structure called the amygdala is believed to be responsible for assigning these emotional reactions. Neuroscientists from MIT’s Picower Institute for Learning and Memory have now identified two populations of neurons in the amygdala that process positive and negative emotions. These neurons then relay the information to other brain regions that initiate the appropriate behavioral response.

The study, which appears in the April 29 issue of Nature, represents a significant step in understanding how the brain assigns emotions to different experiences, says senior study author Kay Tye, the Whitehead Career Development Assistant Professor in the Department of Brain and Cognitive Sciences. “How do we tell if something is good or bad? Intergenerational transmission of emotional trauma through amygdala-dependent mother-to-infant transfer of specific fear. Author Affiliations Edited by Bruce S. 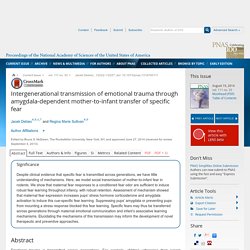 Evidence for Unintentional Emotional Contagion Beyond Dyads. Abstract Little is known about the spread of emotions beyond dyads. 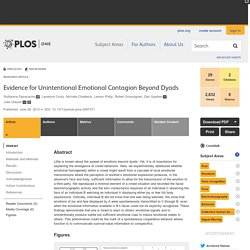 Yet, it is of importance for explaining the emergence of crowd behaviors. Here, we experimentally addressed whether emotional homogeneity within a crowd might result from a cascade of local emotional transmissions where the perception of another’s emotional expression produces, in the observer's face and body, sufficient information to allow for the transmission of the emotion to a third party. We reproduced a minimal element of a crowd situation and recorded the facial electromyographic activity and the skin conductance response of an individual C observing the face of an individual B watching an individual A displaying either joy or fear full body expressions.

Critically, individual B did not know that she was being watched. Living Comfortably with Hypocrisy and Negative Evidence. The Google Define:Hypocrisy command returns the following definition: “the practice of claiming to have moral standards or beliefs to which one’s own behavior does not conform; pretense”. 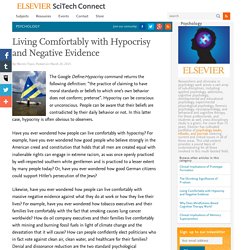 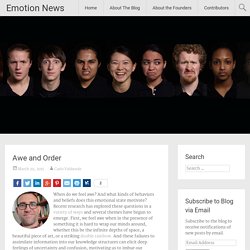 And what kinds of behaviors and beliefs does this emotional state motivate? Recent research has explored these questions in a variety of ways and several themes have begun to emerge. Inzlicht-Bartholow-Hirsh-in-press2. Is self-disgust the emotional trigger that leads to self-harm? To help people who perform non-lethal self-harm, such as cutting and burning themselves, we need a better understanding of the thoughts and feelings that contribute to them resorting to this behaviour. 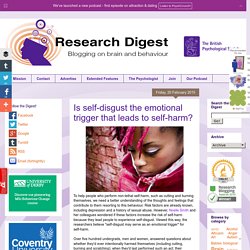 Risk factors are already known, including depression and a history of sexual abuse. However, Noelle Smith and her colleagues wondered if these factors increase the risk of self-harm because they lead people to experience self-disgust. Viewed this way, the researchers believe "self-disgust may serve as an emotional trigger" for self-harm. Distinct populations of neurons respond to emotional valence and ar... Cell. To view the full text, please login as a subscribed user or purchase a subscription. 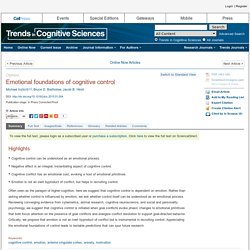 However, affective disorders, and major depressive disorder (MDD) in particular, may be better conceptualized as brain-body disorders that involve peripheral systems as well. Asynchronous presentation of global and local information reveals effects of attention on brain electrical activity specific to each level. 1Cognitive Neurosciences, Cuban Center for Neuroscience, Havana, Cuba2Neuroinformatics, Cuban Center for Neuroscience, Havana, Cuba The neural basis of selective attention within hierarchically organized Navon figures has been extensively studied with event related potentials (ERPs), by contrasting responses obtained when attending the global and the local echelons. The findings are inherently ambiguous because both levels are always presented together.

Thus, only a mixture of the brain responses to two levels can be observed. Perceptions as Hypotheses: Saccades as Experiments. The Child Affective Facial Expression (CAFE) set: validity and reliability from untrained adults. Faces are a very special category of stimuli for us as humans. We might see hundreds of faces in the course of a day and millions in the course of a lifetime. Because of their importance to our everyday social interactions, perception of human facial expressions has likewise been an important topic in psychological research. Nearly three decades ago, Paul Ekman and colleagues identified six “basic” emotional expressions and argued that these six emotions are universally recognizable in most human populations.

This question has elicited much theoretical and empirical research. A puzzling finding has been that toddlers perform well on so-called implicit false belief (FB) tasks but do not show such capacities on traditional explicit FB tasks. I propose a navigational approach, which offers a hitherto ignored way of making sense of the seemingly contradictory results. The proposal involves a distinction between how we navigate FBs as they relate to (1) our current affordances (here & now navigation) as opposed to (2) presently non-actual relations, where we need to leave our concrete embodied/situated viewpoint (counterfactual navigation). Why Do We Want to Bite Cute Things, Like Adorable Newborn Babies? What Is Fatigue?