5 Genius Gadgets From Japanese Bathrooms That Americans Should Borrow. Turns out we've been using the bathroom all wrong. 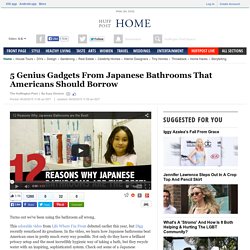 This adorable video from Life Where I'm From debuted earlier this year, but Digg recently resurfaced its greatness. In the video, we learn how Japanese bathrooms beat American ones in pretty much every way possible. How a talented architect makes an RV look like a charming cabin in the woods. The tiny house movement has become a big thing as more and more people try to live with a smaller financial, environmental and physical footprint. 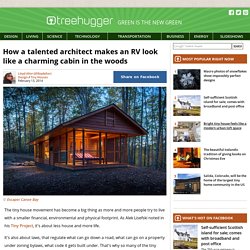 As Alek Lisefski noted in his Tiny Project, it's about less house and more life. It's also about laws, that regulate what can go down a road, what can go on a property under zoning bylaws, what code it gets built under. That's why so many of the tiny houses are under 8'-6" wide and weigh less than 10,000 pounds, so that they can go down the road towed by a private car and be classed as an Recreational Vehicle, or RV. Historically, people would take their little RVs and go to RV parks, where they remain on their chassis but get hooked up to water and sewer. A 220 sq ft tiny home. Tiny House Listings - Buy, sell and rent tiny homes. We The Tiny House People. Kirsten Dirksen Videos. Living Big In A Tiny House. Shaye and Tom's Tiny House Tour. Shipping Container Tiny House. 22 Most Beautiful Houses Made from Shipping Containers.

A Tiny House in Portland, OR. Super modern South African tiny house is bright and green. I have often complained that a lot of tiny houses, being modelled on larger houses that get the shrink-ray, are designed for cuteness instead of practicality, with their tiny lofts that peak in the middle. 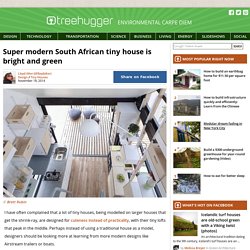 Perhaps instead of using a traditional house as a model, designers should be looking more at learning from more modern designs like Airstream trailers or boats. That's why the INDAWO / lifePOD is so interesting. This design by the South African team of Collaborate000 architects, and product designers Dokter and Missses is super modern, and very much a product of its climate. © Brett Rubin The INDAWO / lifePOD is a lifestyle and design intervention that affords home owners a comfortable, functional experience inside a small space; to live in confluence with the needs of the planet now and in the future .... 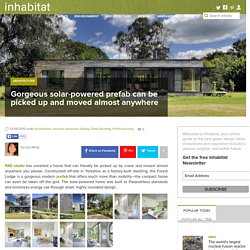 Constructed off-site in Yorkshire as a factory-built dwelling, the Forest Lodge is a gorgeous modern prefab that offers much more than mobility—the compact home can even be taken off the grid. The solar-powered home was built to PassiveHaus standards and minimizes energy use through smart, highly insulated design. While mobility may be one of the Forest Lodge’s coolest benefits, it’s a feature created out of necessity rather than desire. 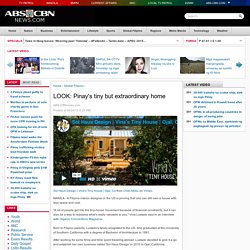 MANILA - A Filipina interior designer in the US is proving that one can still own a house with less space and cost. "A lot of people get into the tiny-house movement because of financial constraints, but it can also be a way to reassess what’s really valuable to you," Vina Lustado said in an interview with Organic Connections Magazine. Born to Filipino parents, Lustado's family emigrated to the US. She graduated at the University of Southern California with a degree of Bachelor of Architecture in 1991. After working for some firms and time spent traveling abroad, Lustado decided to give it a go and establish her own business called 'Sol Haus Design' in 2010 in Ojai, California. Her website describes her as being drawn to social and environmental causes. City of Fresno legalizes tiny homes, and Steven M. Johnson is on it. The mayor of the city of Fresno, California claims that the city "is full of surprises. 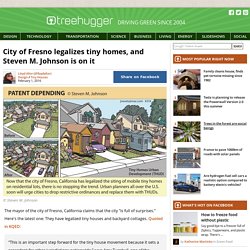 " Here's the latest one: They have legalized tiny houses and backyard cottages. Quoted in KQED: “This is an important step forward for the tiny house movement because it sets a precedent for other jurisdictions nationwide,” says Amy Turnbull, one of the directors of the American Tiny House Association. “This ordinance sends a clear message: we need to adapt our codes to accommodate new housing models and we need to do it quickly and decisively.”

It is actually a really interesting zoning bylaw; it sets maximum and minimum sizes, does not demand extra parking, bans variances and even deals with the look of the house: But Fresno gets it right, being much more flexible: Tiny green-roofed studio is a hidden oasis of calm in Brooklyn Backyard Garden Studio by Nicholas Hunt – Inhabitat New York City. Striking Angular Cottage in Connecticut. Suzanne and Brooks Kelley didn’t set out to make a bold statement. 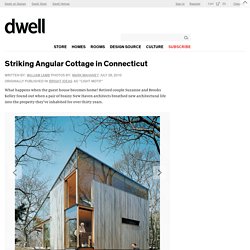 When they hired Lisa Gray and Alan Organschi of Gray Organschi Architecture five years ago, they simply were looking for ways to make better use of their property, a 3.5-acre gently sloping lawn speckled with granite outcroppings and large oak trees overlooking Long Island Sound in Guilford, Connecticut. Their to-do list consisted of relatively simple, mostly cosmetic changes, starting with the expansion of a small bedroom on the ground floor of their house, a onetime barn and servants’ residence for a large mansion that had burned down in the 1920s. Once that was completed, the couple turned their attention to an unfinished space above the garage and a dilapidated clapboard cottage a short walk from the main house toward the shoreline. “I needed more space for books,” says Brooks, a historian, writer, and former archivist and curator of historical manuscripts at Yale University.

There was, however, one major problem. The Wild Rose - Amazing 24' Tiny House on Wheels Tour.