High School Seniors Paint Their Own Parking Spots. How Ferris Bueller's Day Off Perfectly Illustrates the Power of Art Museums. STEAM Catapult Painting - Pretend Studio. This silent film of the Hawaiian Islands from 1924 shows a way of life that once was. Prepare to be transported back in time… Hawaii in 1924, specifically. 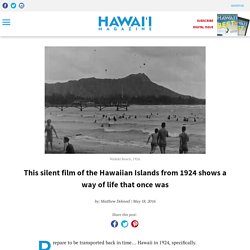 In this silent film simply titled “The Hawaiian Islands,” black and white waves lap against the shores, people shop at the Japanese-owned stores in the city district, workers tend to sugar canes plantation fields in the hot sun, Hawaiians pound poi and surf the high-rise-free beaches of Waikiki—showcasing a way of life that once was. There’s even period footage of molten lava flows at Kilauea on Hawaii Island, and we doubt anyone will ever see men and women in buttoned up collars, top hats and dresses hopping over cracks along the crater floor in this era. The video was shot in the “modern city” of Honolulu, Oahu, and produced by the Ford Motor Company, all when Hawaii, deemed “the crossroads of the Pacific,” was still a territory of the United States. The footage has since been attained by the U.S.

National Archives. Staple agricultural crops, a railroad train system, little to no buildings. Patatap. These Snowflake Decorations are Beautiful and So Simple to Make! Introduction to Psychology. Join the increasing number of students enrolling in online college courses and start earning credits towards your degree. 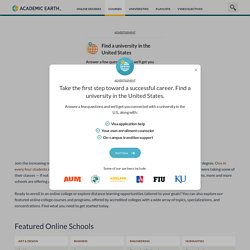 One in every four students now take at least one class online, and during the fall 2014 term, 5.8 million college students were taking some of their classes — if not all of them — through distance learning. To keep up with increasing demand for online options, more and more schools are offering a variety of courses that can be completed remotely, allowing you more flexibility in learning. Looking to enroll in an online college? Browse our featured online programs below and request information from an online college today.

Ready to enroll in an online college or explore distance learning opportunities tailored to your goals? Since 2008, Academic Earth has worked diligently to compile an ever-growing collection of free online college courses from some of the most respected universities. Library Embosser. People who work for airlines, what are secrets passengers don't know? : AskReddit. What are some interesting facts about the human body that are not widely known? : AskReddit. 3 easy paper airplanes - Album on Imgur. Everbright: A Giant Interactive Light Toy That’s Like a Lite-Brite for Grown-Ups. At 42x the size of a traditional ‘Light-Brite’ toy, the Everbright by San Francisco-based Hero Design is a huge grid of adjustable LEDs for drawing with light. 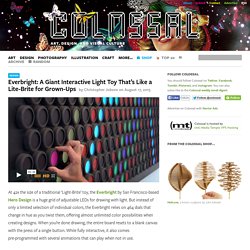 But instead of only a limited selection of individual colors, the Everbright relies on 464 dials that change in hue as you twist them, offering almost unlimited color possibilities when creating designs. When you’re done drawing, the entire board resets to a blank canvas with the press of a single button. While fully interactive, it also comes pre-programmed with several animations that can play when not in use. You can learn more about Everbright here, and it looks like this has already moved beyond a concept and the devices are now available for sale. (via Designboom, Neatorama) WORLD'S LARGEST NATURAL SOUND LIBRARY NOW ONLINE - Video. The Macaulay Library, with over 150,000 recordings of 9,000 species is now digitised and has been uploaded to an online searchable database. 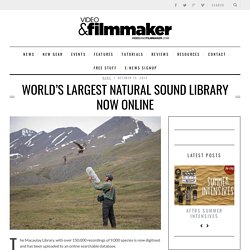 The library, housed at Cornell University’s Lab of Ornithology, has made available over ten terabytes of recordings, with a runtime of 7513 hours of natural sounds. The collection, which began in 1929 has taken researchers dozens of years to accumulate. It currently holds recordings to a massive three-quarters of the world’s entire bird species, but it’s not all chirps and squawks, there’s also a decent helping of whale songs, insects, bears, elephants, primates and just about every other critter or creepy crawley that roams the earth. The collection’s curator Greg Budney describes the archives as revolutionary, in terms of the speed and the breadth of material that is now accessible online.

“This is one of the greatest research and conservation resources at the Cornell Lab,” said Budney. You can access the library now at macaulaylibrary.org. I decorated my parents house for Halloween... Gays Will Marry Your Girlfriends. Welcome to Shel Silverstein. How the Grimm Brothers Saved the Fairy Tale. Two hundred years ago, two young German librarians by the names of Jacob and Wilhelm Grimm published a collection of tales that would become one of the most influential works of folklore in Germany, Europe, and eventually the world. 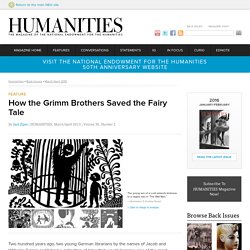 Between 1812 and 1857, seven editions of their tales appeared, each one different from the last, until the final, best-known version barely resembled the first. Given that the first edition has recently been honored in bicentenary celebrations throughout the world, it is perhaps a good time to reexamine what we think we know about the original tales of the Brothers Grimm. You and I (Ampersand) by Bozlyn Schurr. Like a fish out of water. Patatap.