Book Excerpt: Programming a Multiplayer FPS in DirectX: Culling. Culling One of the most important aspects of scene management is rendering the scene. 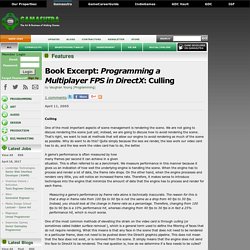 We are not going to discuss rendering the scene just yet; instead, we are going to discuss how to avoid rendering the scene. That's right, we want to look at methods that will allow our engine to avoid rendering as much of the scene as possible. Why do want to do this? Effective Art Directors: Gaming's Something Something. Effective Art Directors: Gaming's Something Something By Ben Cammarano [In a detailed feature, Microsoft Game Studios' Cammarano documents the five major traits that make the video game art director truly effective, from partnerships through unlikely inspiration.] 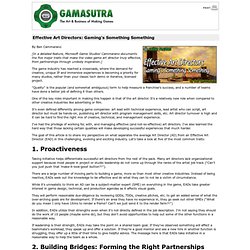 The game industry has reached a crossroads, where the demand for creative, unique IP and immersive experiences is becoming a priority for many studios, rather than your classic tech demo or iterative, licensed project. "Quality" is the popular (and somewhat ambiguous) term to help measure a franchise's success, and a number of teams have done a better job of defining it than others.

One of the key roles important in making this happen is that of the art director. It's even defined differently among game companies: art lead with technical experience, lead artist who can script, art director but must be hands-on, publishing art director with program management skills, etc. Examining Game Pace: How Single-Player Levels Tick. Examining Game Pace: How Single-Player Levels Tick By mark davies [In this in-depth article, veteran designer Davies looks at games from Call Of Duty 4 through Dead Space to analyze the art of game level pacing.] 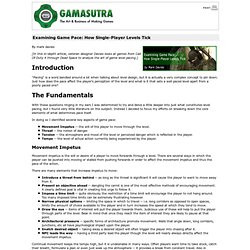 "Pacing" is a word bandied around a lot when talking about level design, but it is actually a very complex concept to pin down. Just how does the pace affect the player's perception of the level and what is it that sets a well paced level apart from a poorly paced one? With these questions ringing in my ears I was determined to try and delve a little deeper into just what constitutes level pacing, but I found very little literature on the subject. Brian Dreyer's Blog - Going Agile - The 7 Simple Stages of Why and How to Get it Done (I’m not saying easy)

Going Agile - The 7 Simple Stages of Why and How to Get it Done (I’m not saying easy) The following blog post, unless otherwise noted, was written by a member of Gamasutra’s community. 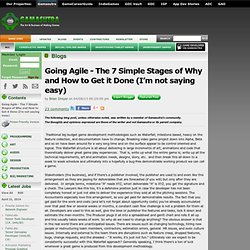 The thoughts and opinions expressed are those of the writer and not Gamasutra or its parent company. Traditional big budget game development methodologies such as Waterfall; milestone based, heavy on the feature collection, and documentation have to change. Breaking video game project down into Alpha, Beta and so on have been around for a very long time and on the surface appear to be control oriented and logical.

This Waterfall structure is all about delivering in large increments of art, animations and code that theoretically deliver great game play experiences. Stakeholders (the business), and if there’s a publisher involved, the publisher are used to and even like this arrangement as they are paying for deliverables that are forecasted (if you will) but only after they are delivered. Waterfall vs. 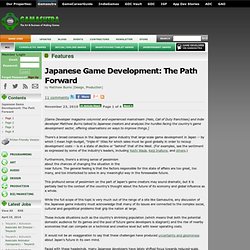 There's a broad consensus in the Japanese game industry that large-scale game development in Japan -- by which I mean high-budget, "triple-A" titles for which sales must be good globally in order to recoup development costs -- is in a state of decline or "behind" that of the West. (For examples, see the sentiment as expressed by some of the industry's leaders, including Yoichi Wada, Keiji Inafune, and others.) Features - Postmortem: Bane Games' Flick Buddies. [Brisbane-based Bane Games recounts the process of going indie, developing their first iOS title, Flick Buddies -- and learning important lessons about timing.] 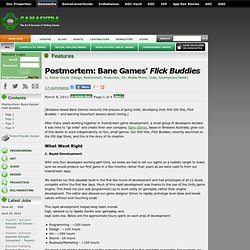 After many years working together in mainstream game development, a small group of developers decided it was time to "go indie" and create their own company. Bane Games, based in Brisbane Australia, grew out of this desire to work independently on fun, small games. Our first title, Flick Buddies, recently launched on the iOS App Store, and this is the story of its creation. 1. Features - Postmortem: Arrowhead Game Studios' Magicka. [In this candid and thoughtful postmortem, Arrowhead Game Studios CEO Johan Pilestedt describes the haphazard "process" behind the Sweden-based development of the PC game Magicka, showing how lack of experience can lead to pitfalls, even when you have the best advice.] 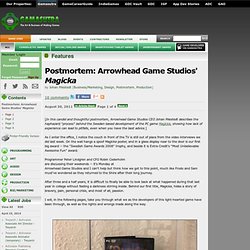 As I enter the office, I notice the couch in front of the TV is still out of place from the video interviews we did last week. On the wall hangs a spoof Magicka poster, and in a glass display near to the door is our first big award -- the "Swedish Game Awards 2008" trophy, and beside it is Extra Credit's "Most Unbelievable Awesome Fun" award. Programmer Peter Lindgren and CFO Robin Cederholm are discussing their weekends -- it's Monday at Arrowhead Game Studios and I can't help but think how we got to this point, much like Frodo and Sam must've wondered as they returned to the Shire after their long journey. 1. A Child of Love 2. 3. 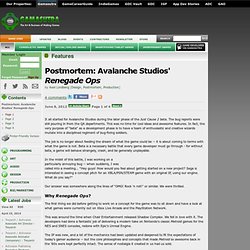 The bug reports were still pouring in from the QA departments. This was no time for cool ideas and awesome features. In fact, the very purpose of "beta" as a development phase is to have a team of enthusiastic and creative wizards mutate into a disciplined regiment of bug-fixing soldiers. The job is no longer about feeding the dream of what the game could be -- it is about coming to terms with what the game is not. Beta is a necessary battle that every game developer must go through - for without beta, a game will behave strangely, crash, and be generally unplayable. Features - 10 Tips: Localization. Features - Making a Prototype of the Future: The Development of Immercenary. With the recent 7DFPS game jam, indies attempted to release the first person shooter from its current creative stagnation. 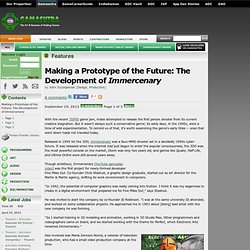 But it wasn't always such a conservative genre; its early days, in the 1990s, were a time of wild experimentation. To remind us of that, it's worth examining the genre's early titles -- ones that went down roads not traveled today. Released in 1995 for the 3DO, Immercenary was a faux-MMO shooter set in a decidedly 1990s cyber-future. It was released when the internet had just begun to enter the popular consciousness, the 3DO was the most powerful console on the market, Doom was only two years old, and games like Quake, Half-Life, and Ultima Online were still several years away. Though ambitious, Immercenary [YouTube gameplay video] was the first project for newly-formed developer Five Miles Out.

"In 1992, the potential of computer graphics was really coming into fruition. He was invited to start the company by co-founder JD Robinson. Features - 10 Tips: Increasing the Effectiveness of Producers. If any single role in game development could lay claim to being the glue holding projects together, it's that of the producer. 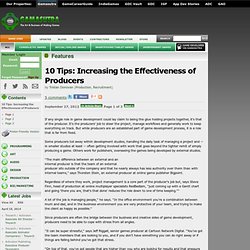 It's the producers' job to steer the project, manage workflows and generally work to keep everything on track. But while producers are an established part of game development process, it is a role that is far from fixed. Some producers toil away within development studios, handling the daily task of managing a project and -- in smaller studios at least -- often getting involved with work that goes beyond the tighter remit of simply producing a game. Others work for publishers, overseeing the games being developed by external studios. "The main difference between an external and an internal producer is that the team of an external producer sits outside of the company and that he nearly always has less authority over them than with internal teams," says Thorsten Stein, an external producer at online game publisher Bigpoint.

Features - EA Goes Free-To-Play: Battlefield Heroes' Producer Speaks. Discussion of the industry's business and development models has been the focus of so many articles, presentations, and conversations for months, if not years now. What business models will work in the future? What audiences should we be developing games for? EA's Digital Illusions CE -- DICE -- is one of the company's most prominent studios. Features - Nailing The Interview, Part 2: Recruiting: What, Why & How?

[In the second in our series of Nailing The Interview articles, HR veteran Marc Mencher discusses the particulars of identifying candidates that you want to interview and the proper tactics to take in the interviewing game. To read the first article in the series, click here.] You've set up your MMO guild, chosen your tabard and selected a couple of officers. Now you need more players. You could spend time watching other people in the game, which means you probably won't be doing much leveling yourself. You could ask everyone to keep an eye out for possible recruits (which you'll probably do anyhow).

Finding great employees is a lot like finding great guild members. Features - Postmortem: Saber Interactive's TimeShift. [Saber Interactive's PC/console shooter TimeShift was released late last year after a "strange and convoluted" - but fascinating - development cycle, and in this exclusive Gamasutra postmortem, the creators detail what went right and wrong in its creation.] Few games have gone through a development cycle as strange and convoluted as TimeShift's. After four years of development, three extensions, two publishers, three re-recordings of voice acting, three iterations of the story, two sets of discrete FMVs and multiple iterations of Saber's technology base, the game finally made it to the shelves for Holiday 2007. The game started off as a small proof-of-concept demo in 2003, which we completed a few months after we released our first title, Will Rock.

Features - Introducing Scrum At Large Animal Games: A Look Back at the First Year of Agile Development. Features - Implementing Training: The Secret Of Winning The Development War. [How can game developers successfully implement ongoing staff training? Features - Producers Of The Roundtable: Structuring Your Team. [Gamasutra is partnering with GameProducer.net, a game production resource, for a series of Q&As named "Producers of the Round Table". The Round Table is a place for producers who work in game industry to present their opinions in response to questions. The most recent article in the series dealt with "getting coders and artists to communicate". Features - Top 10 Pitfalls Using Scrum Methodology for Video Game Development. Features - Postmortem: Naughty Dog's Uncharted: Drake's Fortune. [Naughty Dog calls Uncharted their 'biggest and most complex' challenge yet, and shares successes and stumbles in this fascinating postmortem, originally printed in Game Developer magazine.]

Features - Beyond Scrum: Lean and Kanban for Game Developers. Features - A Closer Look at Crunch. Features - Technology, Design: Rage. Everyone has their eyes on id Software whenever it makes new product announcements -- not least because these often coincide with new iterations of the company's game engine, id Tech. The same holds true of Rage, which is due to be released in 2011. Features - Agile Game Development With Scrum: Teams. [For its latest feature, Gamasutra presents an extracted chapter from Clinton Keith's book Agile Game Development with Scrum, in which the veteran developer and Scrum consultant explains the nuts and bolts of Agile.

In this chapter, he discusses integrating teams with Scrum processes, including best practices and potential pitfalls.] I've worked on creating various products, from the F-22 fighters to games, for more than 20 years. The highlights of my career are clearly marked in my mind by the project teams I was working with. These teams were more consequential to enjoyment and productivity than the company or project we were working for at the time.

Features - What Went Wrong? Learning From Past Postmortems. Features - Postmortem: Defense of the Ancients. Features - Reflecting On Uncharted 2: How They Did It. Features - Book Excerpt: How Game Developers Choose Leaders. Features - In The Loop: Planning for Feedback in Video Game Audio Production. Features - The State of Agile in the Game Industry.