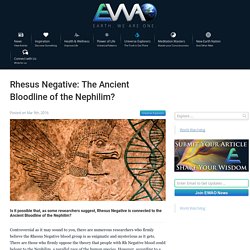 Controversial as it may sound to you, there are numerous researchers who firmly believe the Rhesus Negative blood group is as enigmatic and mysterious as it gets. There are those who firmly oppose the theory that people with Rh Negative blood could belong to the Nephilim, a parallel race of the human species. However, according to a number of theories, it isn’t that unlikely. New theories propose this enigmatic and somewhat rare blood group may indicate non-human traits in the genetic makeup, basically meaning that Rh Negative blood is somewhat different than conventional DNA found in homo sapiens.

Reptilian Aliens in Africa. African Shaman Shares Hidden History... Credo Mutwa shares an incredible (and fairly convincing) story from his ancestors about an “alien” invasion that destroyed humanity; and is the reason for the pain and suffering we see in the world today Credo Mutwa is a famous African Zulu sangoma (traditional healer) from South Africa, who has had ancient esoteric knowledge from his ancestors and predecessors passed down to him that helps to illuminate ancient history. 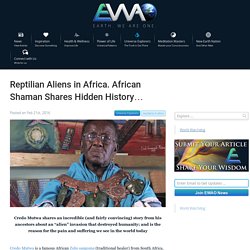 Bizarre Pacific Ocean Red Lights Suggest Underwater Alien Presence. This strange and unexplained sighting shocked the pilots of a Boeing 747-8 who were flying from Hong Kong to Alaska, as well as countless people who later saw the astounding images captured by the two witnesses. 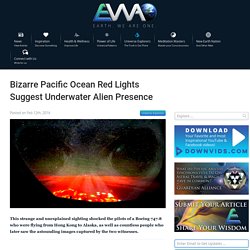 What was supposed to be a routine flight over the North Pacific Ocean turned into something really unexpected. Heading from Hong Kong to Nome, Alaska, Dutch pilot J.P.C. van Hejst and his co-pilot saw a powerful flash of light on the horizon that was leading into the ocean. Anunnaki Gold and a 200,000 Year Old Civilization Might Rewrite History Books. The discovery of ancient or even unknown civilizations has always fascinated archaeologists because such findings have added up to the known history by bringing in new episodes depicting the achievements of the old people that once dwelt on planet Earth. 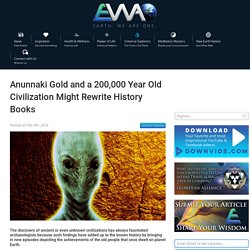 However, when a team of archaeologists investigated this particular site, they couldn’t find a link between it and any other known culture. After carbon-14 was used in order to find the approximate time-period of the African remains, the archaeologists and historians were perplexed – the ruins were around since 160,000 to 200,000 years before Christ. What makes this even more interesting is the fact that no advanced civilizations were thought to exist in South Africa in the past and that the first powerful cultures appeared in Sumeria, Egypt and other places. 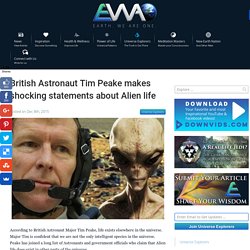 Major Tim is confident that we are not the only intelligent species in the universe. Peake has joined a long list of Astronauts and government officials who claim that Alien life does exist in other parts of the universe. Mexican Government Says Aliens Are Real, American Government Covering It Up. Personally I don’t know when this video was actually aired but it is pretty remarkable to say the least, not just because of the very frank announcement, accompanied with reputable evidence, but also because this was actually aired on mainstream media! 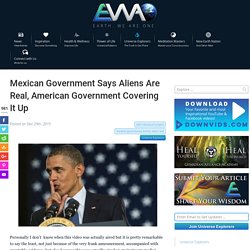 Unfortunately the quality is terrible but the audio content is incredible, and clearly explains to us what is going on. For a government to release this footage to the public is mind boggling, and who ever was responsible for this release I can only imagine what may have been their fate. As the analyst clearly explains, disclosure is coming, which has been voiced by many alien researchers not for years. Below you can also watch a hearing on public disclosure from high ranking government officials, military men and astronauts all calling for the government to come forward and admit the existence of aliens; The Citizen Hearing on Disclosure took place from April 29 to May 3, 2013 at the National Press Club in Washington, DC. 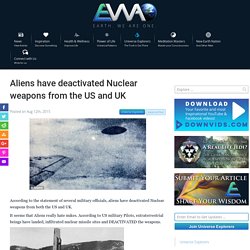 It seems that Aliens really hate nukes. According to US military Pilots, extraterrestrial beings have landed, infiltrated nuclear missile sites and DEACTIVATED the weapons. Numerous highly ranked officials have claimed that since 1948, Alien beings have been visiting countries such as the US and the UK and deactivated Nuclear Missiles. According to a senior U.S. airmen, alien beings even landed in a British base. DNA test results: Paracas skulls are not human. The desert peninsula of Paracas is located on the southern coast of one of South America’s most enigmatic countries: Peru. 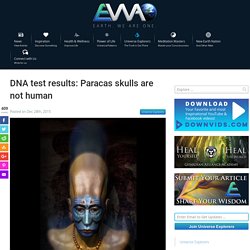 It is there, in this barren landscape where Peruvian archeologist Julio Tello made one of the most mysterious discoveries in 1928. Shocking similarities between Ancient Civilizations: A hidden pattern that explains it all. One of the questions most of us have asked about ancient history is why did so any ancient civilizations build Pyramids all over the world? 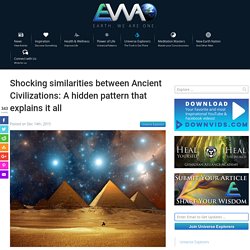 If these ancient civilizations weren’t interconnected in one way or another… why did they follow a nearly identical architectural pattern? Did they have the same instructor? There are countless enigmatic questions that still remain a mystery for mainstream scholars when it comes to ancient civilizations and their development. The ultimate evidence: Earth has been visited by intelligent Alien civilizations. It’s very true that humans continue learning throughout their lives, but not only humans, society in general and even perhaps our civilization as one, has strived to evolve and develop through time, and if we have learnt one thing from the past is that we are continuously exploring our past, uncovering the true origin of mankind. 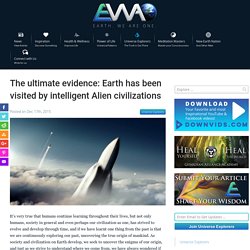 As society and civilization on Earth develop, we seek to uncover the enigma of our origin, and just as we strive to understand where we come from, we have always wondered if we are the only ones out there, in the vast cosmos which was believed to be insignificantly small in the distant past when the Earth was believed to be flat, until Pythagoras asserted that our planet isn’t flat but spherical. Major turnarounds have happened recently, and the best example is Mars. Not so long ago, it was believed that Mars was a completely dead planet, without water, without any chance of life. NASA Captures Bewildering Footage Of UFO Entering & Leaving Earth’s Atmosphere.

Those of you who read our articles on UFOs and extraterrestrials will know that we like to emphasize how seriously this topic is taken by government agencies around the world. Many people are still unaware of this, but it’s true — in recent years, dozens of governments and defence intelligence agencies have officially released thousands of pages of UFO related documents into the public domain. The United States has yet to act on this information, but it seems to be in the works, as Barack Obama’s right hand man and the current head of Hillary Clinton’s presidential campaign, John Podesta, announced last year that his biggest regret of 2014, even ahead of environmental issues, was not “securing the disclosure of UFO files.”

Donut UFOs Seen At Space Station And Over Thailand. Via MysteriousUniverse A donut-shaped UFO was captured on video outside the International Space Station shortly before the video feed was mysteriously cut (again!). A few days later, two similar donut UFOs were captured on video over Thailand. Are the sightings related? The Dogon Tribe And Their Nordic Alien Gods From Sirius. Massive UFO Fleet is hiding behind the Moon claims Government whistleblower. According to statement from a man who claims he worked as a consultant for NASA and the NSA, Alien beings are here, on Earth, the moon and our solar system. The story of Dr Norton is very interesting but hard to believe since little to no evidence has been provided by him, except an interesting story that skeptics will debunk immediately.

Dr. Eric Norton, who has worked for over 10 years as an outside consultant for both NASA and the National Security Agency watching the skies for threats such as asteroids or comets claims that in 2012, he saw a massive fleet of extraterrestrial spaceship hiding behind Earth’s natural satellite. On January 22, 2012, at the MacDonald Observatory located near Fort Davis, using the facility’s wide range systems, Dr Norton detected a group of unidentified spacecraft. The moon has been highly connected to Alien activity ever since NASA shut down its Apollo program. Mind Blowing proof of Alien Activity in new NASA images. The batch of images released to the public of the Apollo missions earlier this week is perhaps the most exciting and ultimate proof of extraterrestrial activity. Remains Of An Advanced 200,000-Year-Old Civilization Discovered In Africa.

About 150 kilometers west of the South African port city of Maputo, a strange metropolis has been discovered. The ancient city, according to researchers, was about 10,000 square kilometers and was constructed around 200,000 years ago. Anunnaki Message Published In UFO Magazine in 1958! A message from the Anunnaki – MANKIND IN AMNESIA (Flying Saucer Review Magazine © November-December 1958) Exhibit 19) Brinsley Le Poer Trench (Flying Saucer Review Magazine © November-December 1958) “We are already here, among you. Official grey alien footage smuggled out of Area 51.

When we thought we had seen it all when it comes to Grey aliens and Area 51 we came across this incredible video footage that was “smuggled” out of Area 51 by a man who calls himself “Viktor”. Evidence of Prehistoric Civilizations: 3 pieces of advanced ancient technology hundreds of millions of years old. Many people believe that before written history, technologically advanced beings inhabited our planet. Characteristics Of ET Races.

Five Alien Species That Are Already On Our Planet. Intelligent Extraterrestrials Are Visiting Earth — The Evidence. GARD Pro Not Registered Throughout humanity’s history, we’ve had several of our beliefs shattered through scientific discoveries. NASA’s Kepler Telescope Discovers a Colossal Artificial Structure Orbiting a Star in Our Vicinity. Source UFOHolic.com. Alien technology possibly spotted orbiting a distant star. Mass activity over Newport Beach, California – June 2015. Harvard Psychiatrist On Alien Abductions/Contact: “Yes, It’s Both Literally & Physically Happening.” NASA Astronauts confirm that UFOs do exist. The Founders And The Creation Of Our Galactic Families. Mysteries of Mankind’s Past: Sumeria. Huffingtonpost. University Scientists Capture Raw Footage of UFO Showing Up At Their Observatory in Norway.

The 5 Main Extraterrestrial Races In Contact With Earth Right Now: What You Need To Know. Fleet Of Spherical UFO's Captured On Tape Over The Philippines. Did A UFO 'Not Made By Man' Hover Over Chile? Are Aliens Visiting the World’s Volcanoes? – Latest. Hubble finds giant halo around the Andromeda galaxy.