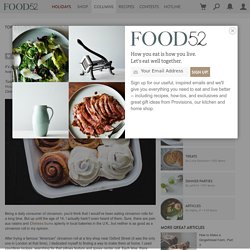 Every week, we'll spare you a trip to the grocery store and show you how to make small batches of great foods at home. Today: If there's anyone who can make a mean cinnamon roll, it's Top With Cinnamon's Izy Hossack. Follow her recipe and you'll have the perfect holiday breakfast without the trip to Cinnabon. Being a daily consumer of cinnamon, you'd think that I would've been eating cinnamon rolls for a long time. But up until the age of 14, I actually hadn't even heard of them. 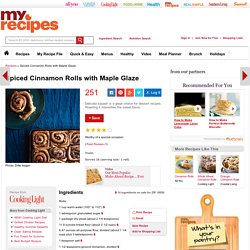 To prepare rolls, combine the first 3 ingredients in a small bowl, and let stand for 10 minutes. 2. Weigh or lightly spoon bread flour and 5.63 ounces (about 1 1/4 cups) all-purpose flour into dry measuring cups; level with a knife. Combine bread flour, 5.63 ounces all-purpose flour, salt, 1/2 teaspoon cinnamon, nutmeg, and cloves in a large bowl, stirring with a whisk. Add yeast mixture, squash, and oil, and stir just until moist. Cinnamon and Pecan Twist Bread Recipe by Abby Moule. How to make Cinnamon and Pecan Twist Bread 1) For the filling mix flour, brown sugar, cinnamon, mixed spice and butter in a bowl. 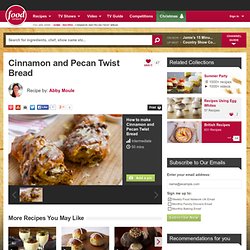 Add the egg whites a little at a time. Using light, rapid sweeping strokes to thicken or thoroughly combine ingredients. You can also use a whisk attachment attached to a food processor. I know this Teach me, please Whisk well until you have a smooth creamy paste and set aside. 2) Sift together the flour, sugar, baking powder and salt together in a bowl. 3) Starting away from the clean one inch, roll up the log into a swiss roll. 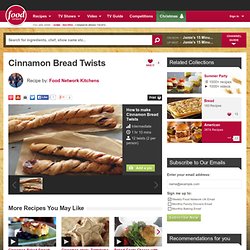 You do not want to bring the milk to boil or it will be too hot and kill the yeast. Remove from the heat and sprinkle the yeast over the mixture. Stir once or twice and set aside until it becomes foamy, about 5 minutes. Put the raisins in a small bowl and add 2 tablespoons water. Using light, rapid sweeping strokes to thicken or thoroughly combine ingredients. Beat in the soaked raisins and any of the liquid in the dish until blended into the dough. Turn the dough out onto a clean work surface lightly dusted with plain flour. 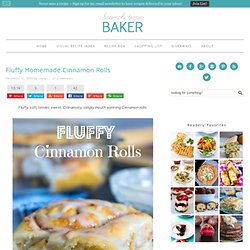 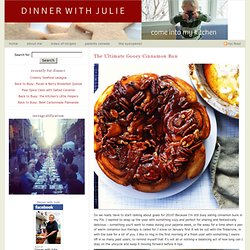 Because I’m still busy eating cinnamon buns in my PJs. I wanted to wrap up the year with something cozy and perfect for sharing and fantastically delicious – something you’ll want to make during your pajama week, or file away for a time when a pan of warm cinnamon bun therapy is called for. I know on January first it will be out with the Toblerone, in with the kale for a lot of you. I like to ring in the first morning of a fresh year with something I swore off in so many past years, to remind myself that it’s not all or nothing-a balancing act of how long can I stay on the unicycle and keep it moving forward before it tips. I’ll get to the new year when it gets here, and you can be sure kale will find its way back onto the menu regardless. Rule #1: they must have goo. And so I put the call out – is goo not as big a deal as I think it is? Ooey-Gooey Cinnamon Buns Recipe - Allrecipes.com. Cinnamon Rolls: Ooey Gooey Goodness. The weather outside is frightful…or becomingly so. 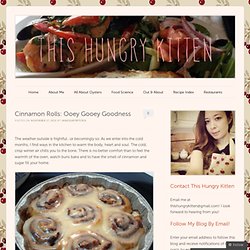 As we enter into the cold months, I find ways in the kitchen to warm the body, heart and soul. The cold, crisp winter air chills you to the bone. There is no better comfort than to feel the warmth of the oven, watch buns bake and to have the smell of cinnamon and sugar fill your home. Soft, Moist and Gooey Cinnamon Buns Recipe - Allrecipes.com. More Recipes Like Soft, Moist and Gooey Cinnamon Buns - All Recipes. 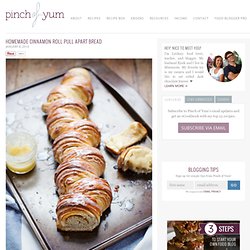 Consumed. Overwhelmed. Carried Away. Which is good, because I could use a little food distraction so I don’t dwell on the fact that I’m going back to work today after three and a half years of winter break. This bread makes me think of happier times that did not involve me trying to start my sub zero temperature car in a very sub zero temperature garage. It reminds me of the happy/warm time when Bjork and I went to a baking class led by the lovely Bea Ojakangas, expert in Scandinavian baking and author of several award winning cookbooks. One of the things Bea taught us how to make was called Pulla. Cinnamon Sugar Pull-Apart Bread. This past weekend, one of my best friends got married in a gorgeous winter wonderland ceremony. Despite the fact that we had temps in the 50′s, and not a snowflake on the ground (not typical January weather for Pennsylvania), the wedding decorations certainly made it feel like a snowy wonderland. It was a wondeful day, and nothing makes me happier than seeing a friend beem with happiness on her wedding day.

For the morning of the wedding, I willingly volunteered to take care of brunch, because what bride needs another thing to worry about on her wedding day? This cinnamon sugar pull-apart bread was perfect for brunch at the hair salon, alongside fresh fruit, a raspberry coffee cake and , mimosas. Cinnamon Roll Recipe from Main Street Bakery at Disney's Magic Kingdom.