Why you may have to update your devices even if you don't want to. We've probably all been there. 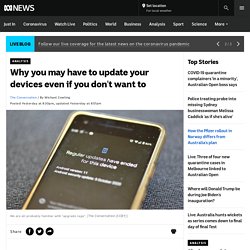 We buy some new smart gadget and when we plug it in for the first time it requires an update to work. So we end up spending hours downloading and updating before we can even play with our new toy. But what happens when we can't update our gadgets any further? Vintage technology Every year, vendors such as Apple and Google add to their list of vintage devices that no longer get operating system or security updates. For example, owners of the Pixel 2 smartphone (released by Google in 2017) were told in late 2020 they would no longer receive regular scheduled system updates and security updates. Upgrading to Google's newest smartphones won't insulate them from this problem for long.

Even if an operating system vendor still supports a device, this presumes the apps and network connections will still work for older devices, which is not always the case. The unrelenting march of technology Technology is not what it used to be. Cables, chips and wireless networks. The Sunburst hack was massive and devastating. Here are 5 observations from a cybersecurity expert. So much remains unknown about what is now being called the Sunburst hack, the cyberattack against US government agencies and corporations. 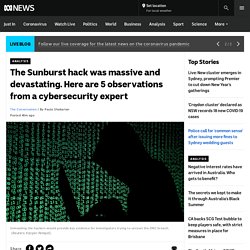 US officials widely believe that Russian state-sponsored hackers are responsible. The attack gave the perpetrators access to numerous key American business and government organisations. The immediate effects will be difficult to judge, and a complete accounting of the damage is unlikely. However, the nature of the affected organisations alone makes it clear that this is perhaps the most consequential cyberattack against the US to date. Can you beat a bee through a maths maze? What arithmetical bees could mean for AI. Updated earlier today at 7:12amThu 7 Feb 2019, 7:12am Anyone who has seen a honeycomb knows bees can understand geometry, but now there is proof their tiny brains are also capable of learning basic arithmetic — and it could have implications for AI developers. 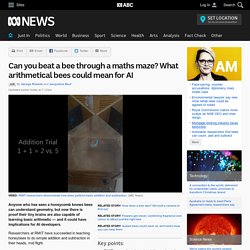 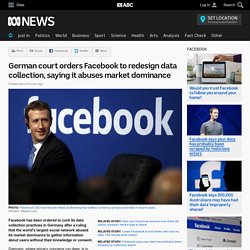 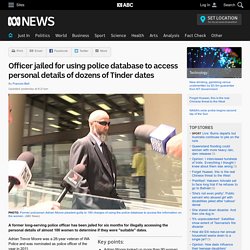 China's research in artificial intelligence 'far outranks' Huawei threat, expert says. Posted about 4 hours agoFri 1 Feb 2019, 8:03pm Experts are warning of the threat posed by China's use of artificial intelligence (AI) to develop a survellience state, and say the risk of such authoritarian behaviour spreading to other parts of the world is increasing. 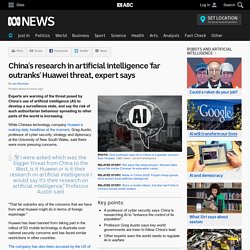 Updated yesterday at 7:30amMon 21 Jan 2019, 7:30am A website detailing the location and contact details of Australian farms has caused outrage in the industry with farm groups saying it is an invasion of privacy. 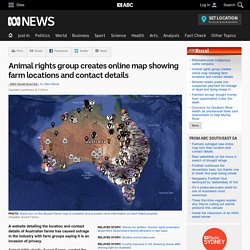 Key points: Interactive map, in some cases lists contact details of farmersFarmers group says map will encourage trespassingAnimal rights group offers to remove contacts details on request Animal rights charity, Aussie Farms, created the map and the group's executive director Chris Delforce said it had been made live so the public could view the farms themselves. "This map is about laying everything bare so the consumers can make their own informed choices about what they wish to support with their purchases," he said. 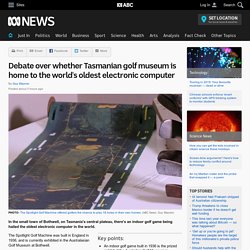 Key points: An indoor golf game built in 1936 is the prized exhibit of the Australian Golf Museum in TasmaniaWhile its status as a computer is debated, it is lauded as a pioneer of interactive gamingThe Australian Golf Museum has bought a second machine, and hopes to get it in working order The Spotlight Golf Machine was built in England in 1936, and is currently exhibited in the Australasian Golf Museum at Bothwell. Dead musicians are touring again, as holograms. It's tricky — technologically and legally. Updated about an hour agoFri 28 Dec 2018, 11:56pm In 2019, Amy Winehouse will tour the world. 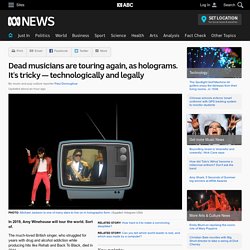 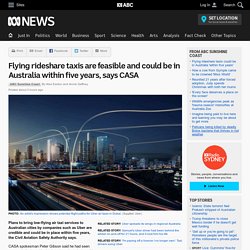 CASA spokesman Peter Gibson said he had seen proposals for low-altitude air taxi services that would fly people between locations such as an airport and the central business district of a large city and believed the companies behind the proposals were serious about them. Telstra on NT town's naughty list after 11-day blackout costs businesses thousands. Posted earlier today at 6:07amMon 24 Dec 2018, 6:07am It's the tiny Northern Territory town that Telstra hung up on in the build up to Christmas.

Key points: A faulty air-conditioner caused a telecommunications blackout which lasted nearly two weeksBusiness owners have been considering launching a class action against Telstra over losses during the periodTelstra says it responded to the situation as best as it could, and businesses will be considered for reimbursement For 11 days this month the town of Batchelor was left stranded without internet services with businesses reporting thousands of dollars in losses. Some residents in the town just 100km from Darwin, population around 500, were considering launching a class action against the telecommunications giant, whose equipment failure was responsible for the outage which also knocked out mobile coverage and landline services for days.

"The town wants to take a class action … the other businesses have lost tens of thousands of dollars too. " Red Dead Redemption 2 shows gaming's problem with violence towards women. Opinion By Jessamy Henricksen and Marika Guggisberg Posted about an hour agoSun 18 Nov 2018, 8:34pm It's common practice in the world of gaming for serious video game players to upload videos of their gaming experiences to YouTube, usually for purposes of providing tips to other gamers, walkthroughs and highlights. Last month, the YouTube channel "Shirrako" uploaded a video of a portion of the recently released video game Red Dead Redemption 2 (RDR2). The video depicted an avatar (the figure representing the player in a video game) physically assaulting a female character until she was unconscious. Within days, the video had received more than 1 million views. Farmers welcome new weather radar to be built in Victoria's Wimmera region - ABC Rural - ABC News.

Farmers say a new radar in north-west Victorian town of Rainbow will fill a gaping hole in the country's weather radar network. After years of campaigning, and two-and-a-half-years after initial funding announcement from State and Federal governments, the Bureau of Meteorology (BOM) revealed the slated location for the German-made doppler radar. The region is known as a 'black hole' for weather data because it relies on weather stations interstate and hundreds of kilometres north in Mildura, and farmers say the data is virtually redundant. Chinese drone maker DJI left users at high risk of spying and hacking under security flaw. Posted about 4 hours agoTue 13 Nov 2018, 8:37pm The world's largest drone manufacturer has had to patch a security vulnerability that left users' photos, videos, and data wide open to hackers. Key points: Vulnerability listed as high-risk, users only had to click a link to be exposedCheck Point says spying on enterprises and individuals could have been possibleDJI said there is no evidence that the vulnerability was exploited Chinese drone giant Da-Jiang Innovations (DJI) commands more than 70 per cent of the global market, supplying products for personal, commercial, and even military use.

But there have been major concerns about drone security and privacy issues, particularly surrounding the possibility of criminal data hacking and Chinese government surveillance. Iranian hackers suspected in cyber breach and extortion attempt on Navy shipbuilder Austal. Updated about 2 hours agoMon 12 Nov 2018, 11:01pm Iranian hackers are believed to be responsible for a cyber security breach and extortion attempt on Australia's biggest defence exporter. Key points: Ship designs were accessed in the cyber attack on AustalNot known whether the hackers worked for the Iranian Government or notAn Iranian-based hack attack on Australian universities took place this year Perth-based shipbuilder Austal earlier this month revealed an "unknown offender" had hacked into its computer systems, accessing staff email addresses and phone numbers as well as ship drawings and designs.

Some of the information was then offered for sale on the dark web in an apparent extortion attempt. Tech sector says Peter Dutton's encrypted message 'back door' will jeopardise digital security. 'I don't know Facebook or Twitter': China's Great Firewall Generation Z cut off from the West. Samsung releases bendable smartphone tablet hybrid but other tech companies are in the fold. The Government is worried you're not getting enough sleep. A robot didn't take Ibrahim's job, but it did fire him - RN. Family violence perpetrators using school apps and web portals to harass, stalk and intimidate - Science News - ABC News. At first, Michelle* thought Seesaw was a great idea.

The app, founded by former Facebook employees, allows parents to check in on their child's progress at school. Vehicles that can talk to each other? Driverless cars to be tested in Adelaide CBD. Tax office computer says yes, Federal Court says no. By business reporter Nassim Khadem. Made in China 2025: Xi Jinping's plan to turn China into the AI world leader. Automated vehicles may bring a new breed of distracted drivers. Opinion By Mitchell Cunningham and Michael Regan. Robotic skin technology has the power to transform soft objects into machines - Science News - ABC News. Relinquishing more power to robots up for debate at futurist talks in Sydney. Canberra schools buck smartphone ban trend. North Korea says Sony, WannaCry hack charges are a smear campaign. Tinder users go from heartbreak to harassment with their disturbing social media pursuits. Fact checking in a world of misinformation, disinformation and fakery - Fact Check.

Google clarifies how it tracks a user's location even if they turn the setting off. High-tech robot couriers set efficiency in motion at the National Library of Australia. Data for sale: The woman who turned herself into a corporation - RN. Online genealogy has created an unregulated forensic database for police - Science News - ABC News. Art of Science exhibition showcases deadly beauty in 3D - Science News - ABC News.

Australian Computer Museum Society collection at risk from bulldozers - Science News - ABC News. Photos stolen and used by someone else on Facebook? This is what you can do about it. France passes new law banning smartphones, tablets and smart watches in schools. Have your kids messed up your algorithms? Here's what you can do to reset them. New laws to crack down on 'claim farming' scammers, who on-sell your private information. Technology's potential to help or harm 'almost limitless', Human Rights Commission warns - Science News - ABC News. Facebook could face an Australian class action, and an astrophysicist is leading the charge - RN.

Inside the bunkers and war rooms where major banks wage nightly battle on the frontline of cyber war. The press kit from the Trump-Kim summit included a USB fan. Experts don't think it's safe. WhatsApp video of fake kidnapping sparks hysteria in India as mob beats men to death. Fortnite is taking over. These experts want you to play it with your kids. Fortnite survival game enthrals children in battle of the consoles. First ever 100pc electric car charges up for the 2018 Finke Desert Race. Selfie in front of maimed woman at train station sparks ethics debate. Future of technology in the classroom debated at EduTech conference. Trolls, fanboys and lurkers: improving online commenting culture. How Jamie went from an internet troll to TAFE's student of the year - Hack - triple j. Amazon's Alexa recorded a family's private conversation and sent it to a random contact. Inequality in Australia: four ways technology is creating a new divide. Create Infographic - Sign in.

Piktochart. Why a banana could swipe your phone or tablet touch screen - Science News - ABC News. Psychology of internet trolls: They understand what hurts people but simply don't care. Glary Utilities - Release Notes. Untitled. Are schools preparing our children for the workplaces of the future? Yammer. Sign in to your account. Matthew Jorgensen.