‘Unprecedented’ 65 million people displaced by war and persecution in 2015 – UN. 20 June 2016 – The number of people displaced from their homes due to conflict and persecution last year exceeded 60 million for the first time in United Nations history, a tally greater than the population of the United Kingdom, or of Canada, Australia and New Zealand combined, says a new report released on World Refugee Day today. 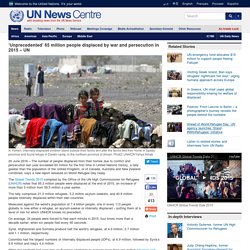 The Global Trends 2015 compiled by the Office of the UN High Commissioner for Refugees (UNHCR) notes that 65.3 million people were displaced at the end of 2015, an increase of more than 5 million from 59.5 million a year earlier. The tally comprises 21.3 million refugees, 3.2 million asylum seekers, and 40.8 million people internally displaced within their own countries. Measured against the world’s population of 7.4 billion people, one in every 113 people globally is now either a refugee, an asylum-seeker or internally displaced – putting them at a level of risk for which UNHCR knows no precedent.

Global Trends - Forced Displacements in 2015. UNHCR - Worldwide displacement hits all-time high as war and persecution increase. Global Trends 2014 © UNHCR GENEVA, June 18 (UNHCR) - Wars, conflict and persecution have forced more people than at any other time since records began to flee their homes and seek refuge and safety elsewhere, according to a new report from the UN refugee agency. 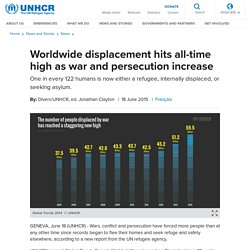 UNHCR's annual Global Trends Report: World at War, released on Thursday (June 18), said that worldwide displacement was at the highest level ever recorded. It said the number of people forcibly displaced at the end of 2014 had risen to a staggering 59.5 million compared to 51.2 million a year earlier and 37.5 million a decade ago. The increase represents the biggest leap ever seen in a single year.

Moreover, the report said the situation was likely to worsen still further. UNHCR: Two children drown every day on average trying to reach safety in Europe. Greek volunteer life-guards help a young child out of a boat that reached the shores of Lesbos, having crossed the Aegean sea from Turkey. © UNHCR/A. 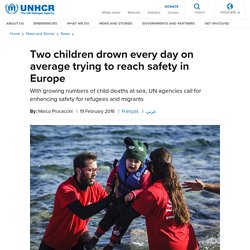 Zavallis KOS, Greece, Feb 19 (UNHCR) - Two children have drowned every day on average since September 2015 trying to cross the eastern Mediterranean to find safety with their families in Europe, UNHCR, the UN Refugee Agency, said today. In a joint statement, issued in Geneva, UNHCR, UNICEF and the IOM warned that the number of child deaths was on the increase and called for more measures to increase safety for those escaping conflict and despair.

Since last September, when the tragic death of toddler Aylan Kurdi captured the world's attention, more than 340 children, many of them babies and toddlers, have drowned in the eastern Mediterranean. The total number of children who have died may be even greater, the sister organisations said, with their bodies lost at sea and never recovered. Full press release here. UNHCR - Figures at a Glance. We are now witnessing the highest levels of displacement on record. 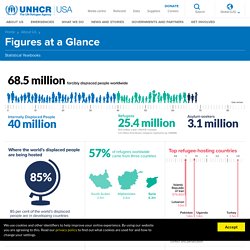 An unprecedented 68.5 million people around the world have been forced from home. Among them are nearly 25.4 million refugees, over half of whom are under the age of 18. The Uprooted. 6 charts and a map that show where Europe's refugees are coming from - and the perilous journeys they are taking. More migrants and refugees are arriving in Europe than ever recorded before as war, persecution and poverty continues to drive people from their homes - and the numbers are still rising. 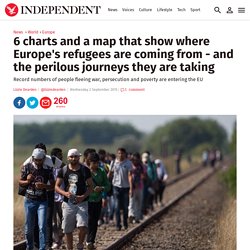 One in every 122 people in the world is currently either a refugee, internally displaced or seeking asylum because the "world is a mess", according to the head of the UN’s refugee agency. It comes as The Independent publishes powerful images of a dead child washed up on a beach in a Turkish tourist spot, thought to be one of 11 Syrians who drowned trying to reach Europe. The true number of arrivals, mainly taking perilous voyages over the Mediterranean and Aegean seas, or trekking through the Balkans, is impossible to gauge but 350,000 have been detected so far this year. Many families arriving in the EU have stayed in several countries on their long journeys, while others have been driven out of places like Libya where they initially worked or sought refuge before it descended into turmoil.

Migrant crisis: EU splits exposed as summit looms. Splits within the EU on the relocation of 120,000 migrants have been further exposed as leaders hold an emergency meeting in Brussels. 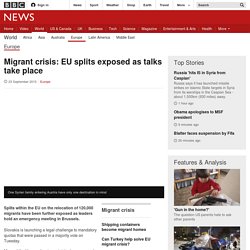 Slovakia is launching a legal challenge to mandatory quotas that were passed in a majority vote on Tuesday. Meanwhile, Hungary's prime minister has proposed a radical budgetary revamp to raise funds. The summit will focus on tightening EU borders and aiding neighbours of Syria, from where many migrants come. The talks were continuing well into the night, having started just after 19:00 Brussels time (17:00 GMT). Global Migration Trends 2015 Factsheet IOM.