How Society Kills Your Creativity In An Award Winning Pixar-esque Short Film. When it comes to our modern day society, there is no doubt that we are being told how to live and what our lives are supposed to look like. 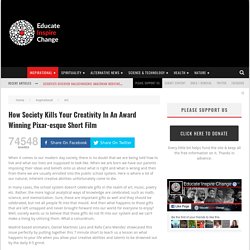 When we are born we have our parents imposing their ideas and beliefs onto us about what is right and what is wrong and then from there we are usually enrolled into the public school system. Here is where a lot of our natural, inherent creative abilities unfortunately come to die. Crimson Peak - Wikipedia. The film premiered at the Fantastic Fest on September 25, 2015 and was released by Universal Pictures on October 16.[4][5][6][7] It grossed $74 million against its $55 million budget and received generally positive reviews from critics. 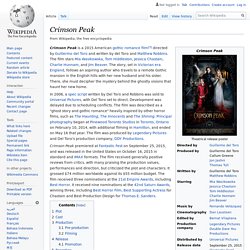 Unimpressed with Sharpe's previous failures to raise capital, Cushing rejects Thomas's proposal. Edith's mother's spirit once again visits her, bearing the same warning. When Thomas and Edith become romantically involved, her father and Edith's childhood friend, Dr. Cast[edit] Double - Wikipedia. From Wikipedia, the free encyclopedia Double may refer to: Look-alike, a person who closely resembles another personBody double, someone who substitutes for the credited actor of a characterDoppelgänger, ghostly double of a living personPolish Enigma doubles, replicating the function of Nazi Germany's cipher machinesDouble, a bet which combines two selections; see Glossary of bets offered by UK bookmakers#DoubleDouble, a former fraction of the Guernsey poundDouble, a former rank of a liturgical feast in the Roman RiteDouble-flowered form of plants People[edit] Baron Emile Double (1869–1938), vigneron who established the vineyard at the Château de Beaupré in Saint-Cannat in 1890François-Joseph Double (1776–1842), French physicianMarie-Louise Double de Saint-Lambert (1891–1974), French philanthropist later known as Countess Lily PastréSteve Double (born 1966), British Conservative Party politician, Member of Parliament (MP) for St Austell and Newquay since 2015 Mathematics and computing[edit] 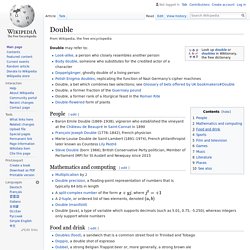 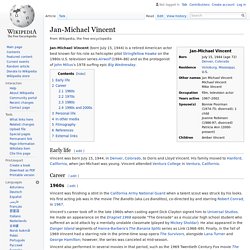 Early life[edit] Vincent was born July 15, 1944, in Denver, Colorado, to Doris and Lloyd Vincent. His family moved to Hanford, California, when Jan-Michael was young. Vincent attended Ventura College in Ventura, California. Career[edit] Charles Rocket - Wikipedia. Early life[edit] Rocket was born in Bangor, Maine, the son of Mary Aurelia (Fogler) and Sumner Abbott "Ham" Claverie.[1][2] He attended the Rhode Island School of Design in the late 1960s and was part of the Rhode Island underground culture scene in the 1970s that also included Talking Heads frontman David Byrne and film director Gus Van Sant.[3] Career[edit] Rocket appeared from time to time with his friend Dan Gosch as superheroes "Captain Packard" and his faithful sidekick "Lobo".[4] In an RISD yearbook, the dynamic duo appeared in a photo at the Rhode Island State House with then-Governor Frank Licht. 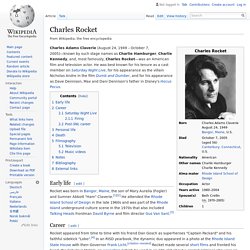 [citation needed] Rocket made several short films and fronted his band, the Fabulous Motels, on accordion (which he used in an SNL skit about a crazed criminal who uses an accordion to kill his dates and is killed himself by a bagpipe band). Saturday Night Live[edit] Inception (2010) - Synopsis. Arts and Crafts movement. The Arts and Crafts movement was an international design movement that flourished between 1860 and 1910, especially in the second half of that period,[1] continuing its influence until the 1930s.[2] It was led by the artist and writer William Morris (1834–1896) during the 1860s,[1] and was inspired by the writings of John Ruskin (1819–1900) and Augustus Pugin (1812–1852), although the term "Arts and Crafts" was not coined until 1887, when it was first used by T. 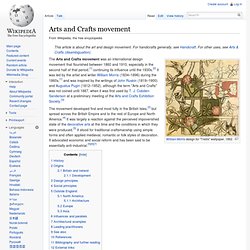 J. Cobden-Sanderson at a preliminary meeting of the Arts and Crafts Exhibition Society.[3] The movement developed first and most fully in the British Isles,[2] but spread across the British Empire and to the rest of Europe and North America.[4] It was largely a reaction against the perceived impoverished state of the decorative arts at the time and the conditions in which they were produced.[5] It stood for traditional craftsmanship using simple forms and often applied medieval, romantic or folk styles of decoration. Manic Pixie Dream Girl. The "Manic Pixie Dream Girl" has been compared to another stock character, the "Magical Negro", a black character who seems to exist only to provide spiritual or mystical help to the (white) protagonist. 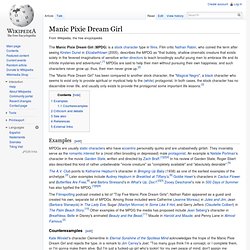 In both cases, the stock character has no discernible inner life, and usually only exists to provide the protagonist some important life lessons.[3] Examples[edit] Counterexamples[edit] Kate Winslet's character Clementine in Eternal Sunshine of the Spotless Mind acknowledges the trope of the Manic Pixie Dream Girl and rejects the type, in a remark to Jim Carrey's Joel: "Too many guys think I'm a concept, or I complete them, or I'm gonna make them alive. We Got the Dune We Deserved: Jodorowsky’s Dune. Mathew Brady. Mathew B. 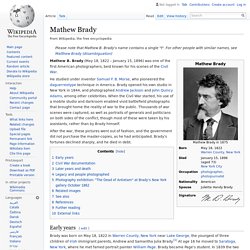 Brady (May 18, 1822 – January 15, 1896) was one of the first American photographers, best known for his scenes of the Civil War. He studied under inventor Samuel F. B. Alejandro González Iñárritu. Colonial Pagans and Sleepy Hollow Part II. Welcome to the second installment in my examination of Tim Burton's 1999 opus Sleepy Hollow. 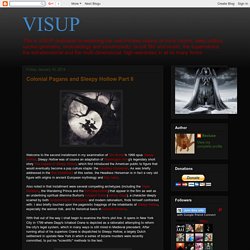 Sleepy Hollow was of course an adaptation of Washington Irving's legendary short story The Legend of Sleepy Hollow, which first introduced the American public to figure that would eventually become a pop culture staple: the Headless Horseman. Rise of the Google ghosts: Artist pastes eerie life-size images of pedestrians captured on Street View in exactly the same location in the real world. By Kieran Corcoran Published: 00:13 GMT, 18 September 2013 | Updated: 06:55 GMT, 18 September 2013. 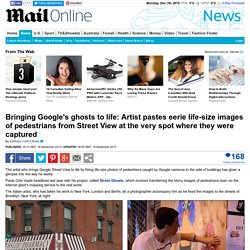 ‘Birdman’ Ending Explained - Page 3. Werner Herzog Hypnotizes Chickens. An Artist Considers Levels in Matter — Art by Myrrh. Fig. 6. Reductionism ad Absurdum, scratchboard, 8 x 10-in, 1983. The Legend of William Tell. The Legend of William Tell is a 16-part[1] television fantasy/drama series produced in 1998[1] by Cloud 9 Productions in New Zealand. The basic premise of the series — a crossbow-wielding rebel defies a corrupt governor — and the name of the title character were adopted from the traditional story, but the series was set in a fantasy world and featured supernatural themes.

Described by executive producer Raymond Thompson as "Star Wars on the planet Earth", this is a fantasy saga of bravery, magic, myth and romance. William Tell is the youthful leader of a band of young, ‘brat pack' outlaws, forever hunted by the forces of darkness, led by Xax and Kreel, who have usurped power in their homeland.

They Live. They Live is a 1988 American satirical science fiction horror film written and directed by John Carpenter. The film stars Roddy Piper, Keith David, and Meg Foster. It follows an unnamed drifter (referred to as "John Nada" in the film's credits) who discovers the ruling class are in fact aliens concealing their appearance and manipulating people to spend money, breed, and accept the status quo with subliminal messages in mass media. They Live is based on the 1963 short story, "Eight O'Clock in the Morning" by Ray Nelson. At release it was number one in the box office, but sales soon suffered, though the film was nominated for two Saturn Awards. They Live has since become a cult film.

Robert Rauschenberg. Robert Rauschenberg (October 22, 1925 – May 12, 2008) was an American painter and graphic artist whose early works anticipated the pop art movement. Alberte Pagán » PETER KUBELKA interviewed. The True Story Behind 'Madonnina' - January 2000 Issue of St. Anthony Messenger Magazine Online. “On Robert Rauschenberg, Artist, and His Work” (1961) To Whom It May Concern: The white paintings came first; my silent piece came later. To Whom No Subject No image.