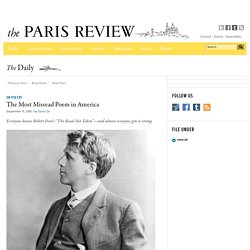 Frost in 1913. From The Road Not Taken: Finding America in the Poem Everyone Loves and Almost Everyone Gets Wrong, a new book by David Orr. A young man hiking through a forest is abruptly confronted with a fork in the path. He pauses, his hands in his pockets, and looks back and forth between his options. Umberto Eco's books blazed a trail for Harry Potter and Twilight.

Jack Kerouac, misogynist creep: Inside his ugly infatuation with Marilyn Monroe. Agatha Christie Was Actually a Poison Master. The best-selling novelist of all time actually knew how to whip up a brew that could put you 6 feet under. 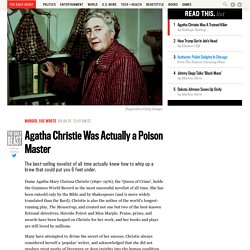 Dame Agatha Mary Clarissa Christie (1890–1976), the ‘Queen of Crime’, holds the Guinness World Record as the most successful novelist of all time. She has been outsold only by the Bible and by Shakespeare (and is more widely translated than the Bard); Christie is also the author of the world’s longest-running play, The Mousetrap, and created not one but two of the best-known fictional detectives, Hercule Poirot and Miss Marple. Praise, prizes, and awards have been heaped on Christie for her work, and her books and plays are still loved by millions. Many have attempted to divine the secret of her success. Christie always considered herself a ‘popular’ writer, and acknowledged that she did not produce great works of literature or deep insights into the human condition. Christie took advantage of her detailed knowledge of dangerous drugs to help develop her plots.

A criminal career. The Stacks: How America Fell for the Private Eye. Ross Macdonald wrote his share of classic American detective stories. 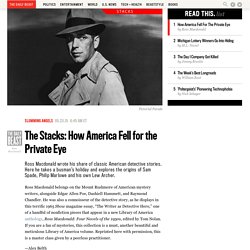 Here he takes a busman’s holiday and explores the origins of Sam Spade, Philip Marlowe and his own Lew Archer. Ross Macdonald belongs on the Mount Rushmore of American mystery writers, alongside Edgar Allen Poe, Dashiell Hammett, and Raymond Chandler. How 5 Great Writers Got Started On Their First Novels  While working on my book Process: The Writing Lives of Great Authors, I found that even for the best writers in the world, getting started can be the hardest part. 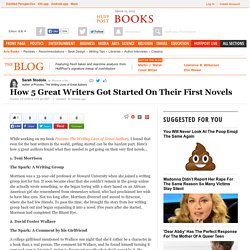 Here's how 5 great authors found what they needed to get going on their very first novels... 1. Toni Morrison The Spark: A Writing Group Morrison was a 35-year-old professor at Howard University when she joined a writing group just for fun. Lauren Coodley's <i>Upton Sinclair: California Socialist, Celebrity Intellectual</i>  Can a dedicated socialist have a significant impact upon American life? 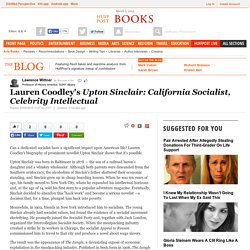 Lauren Coodley's biography of prominent novelist Upton Sinclair shows that it's possible. Upton Sinclair was born in Baltimore in 1878 ― the son of a railroad baron's daughter and a whiskey wholesaler. Although both parents were descended from the Southern aristocracy, the alcoholism of Sinclair's father shattered their economic standing, and Sinclair grew up in cheap boarding houses. When he was ten years of age, his family moved to New York City, where he expanded his intellectual horizons and, at the age of 14, sold his first story to a popular adventure magazine. “I realize now that he was sexless” But, propped on beds of amaranth and moly, How sweet – while warm airs lull us, blowing lowly – With half-dropped eyelid still, Beneath a heaven dark and holy, To watch the long bright river drawing slowly His waters from the purple hill – Lawrence was in no hurry to go back to Oxford, so when Woolley left for England on 14 June 1913 he stayed at Jerablus.

He had recently had a rare open disagreement with his mother, who had made a comment about their working on the sabbath, taking Fridays off instead. He had responded by asking, ‘Would it be quite considerate to make two hundred workmen miss their day [of rest] for the sake of the two of us? Especially as they are not sophisticated enough to have heard of Julian and Gregorian calendars, or the “first day of the week” theory.’

This peace was soon disturbed by the arrival of a stray English consul, en route to Diarbekir, one hundred miles to the east, who needed to be entertained. Scottish Historian Finds a Lost Sherlock Holmes Story by Arthur Conan Doyle While Searching Around in His Attic. Down and dirty fairy tales: How this rediscovered stash of darker-than-Grimm stories destroys our Prince Charming myths. In 2012, readers around the world were intrigued to learn that a researcher in northern Bavaria had discovered hundreds of never-published fairy- and folktales collected by the 19th-century folklorist Franz Xaver von Schönwerth. 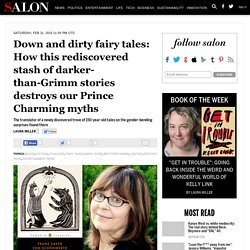 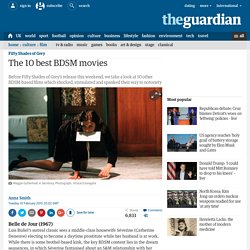