THIS IS JUST TO SAY BY WILLIAM CARLOS WILLIAMS. 文艺入魂的旧金山，巴黎也无法替代. 作为一个燃烧着创新与创意的城市，旧金山在文艺人的心中无可替代。 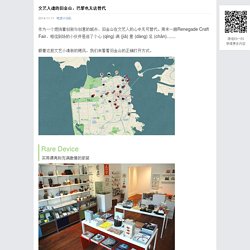 周末一趟Renegade Craft Fair，相信到场的小伙伴是逛了个心 (qīng) 满 (jiā) 意 (dàng) 足 (chăn)…… 顺着这股文艺小清新的飓风，我们来看看旧金山的正确打开方式。 Rare Devices是一个为设计师而设的小商店，吸引着那些对实用的，美观的和有激情的居家产品感兴趣的人。 地址：600 Divisadero St, SF - 94117 电话：(415) 863-3969 营业时间 ：12pm-8pm 在The Mill温暖和现代的空间里享用一杯咖啡和一片烤面包，绝对是你在逛完Alamo广场之后的好去处。 地址：736 Divisadero St, SF - 94117. A Spectrum of Moustaches poster. 10 Cities Visualized By How Cleanly Their Streets Are Laid Out. Kevin Spacey's Bio on WhoSay. Having become an actor at a young age, I spent my time watching and performing in plays, starting out treading the boards at Chatsworth High School, where Mare Winningham and I starred as Maria and Captain Von Trapp in our 12th grade production of 'The Sound Of Music'. 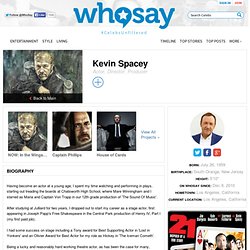 Adventure Club Trolls Fans By Actually Turning Down [Video] Vivid Photos from Spain's 25th Colorful 'Human Tower' Competition. The Tarragona Castells may be the most fascinating team sporting event in the world. 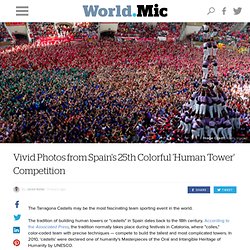 The tradition of building human towers or "castells" in Spain dates back to the 18th century. According to the Associated Press, the tradition normally takes place during festivals in Catalonia, where "colles," color-coded team with precise techniques — compete to build the tallest and most complicated towers. In 2010, 'castells' were declared one of humanity's Masterpieces of the Oral and Intangible Heritage of Humanity by UNESCO. 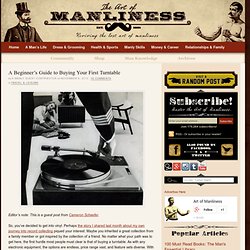 So, you’ve decided to get into vinyl. Perhaps the story I shared last month about my own journey into record collecting piqued your interest. Maybe you inherited a great collection from a family member or got inspired by the collection of a friend. No matter what your path was to get here, the first hurdle most people must clear is that of buying a turntable.

As with any electronic equipment, the options are endless, price range vast, and feature sets diverse. Sneak Peek at the New SFMOMA. 30 Classy Tattooed People Who Show That Body Art Doesn't Make You Look Unprofessional. Many employers turn down potential employees the moment they see that they have visible tattoos. 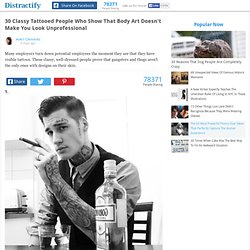 These classy, well-dressed people prove that gangsters and thugs aren't the only ones with designs on their skin. Share78371People Sharing. Talk Show Host Makes All Other Hosts Look Absurd During Devastating Monologue. THE BURNING MAN PICTURES YOU HAVEN'T SEEN YET. Thought you'd already found your favourite photo from Burning Man 2014? 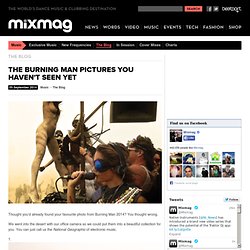 You thought wrong. We went into the desert with our office camera so we could put them into a beautiful collection for you. You can just call us the National Geographic of electronic music. [Photos: Polyanna Saville, Victoria Aldanova] First Listen Live: Alt-J, 'This Is All Yours' A Brief History of Pop Art, From Warhol to Murakami. Douglas Coupland is 'everywhere is anywhere is anything is everything' Douglas Coupland:everywhere is anywhere is anything is everything art exhibition at the Vancouver Art Gallery on August 10, 2014. 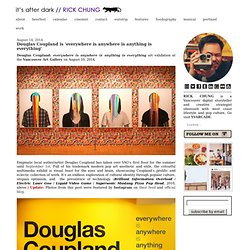 Enigmatic local author/artist Douglas Coupland has taken over VAG's first floor for the summer until September 1st. Full of his trademark modern pop art aesthetic and style, the colourful multimedia exhibit is visual feast for the eyes and brain, showcasing Coupland's prolific and eclectic collection of work. It's an endless exploration of cultural identity through popular culture, utopian optimism, and the prevalence of technology. 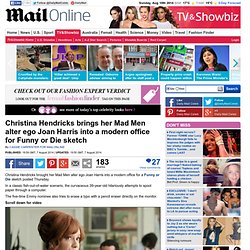 San Francisco: 3D Printed. 10 of The Greatest Movie Endings of All Time [MAJOR SPOILERS] It was tough to ween down to only 10 because there are truly hundreds of incredible movie endings out there; so I will definitely have to make more lists! 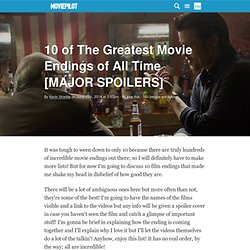 But for now I'm going to discuss 10 film endings that made me shake my head in disbelief of how good they are. There will be a lot of ambiguous ones here but more often than not, they're some of the best! I'm going to have the names of the films visible and a link to the videos but any info will be given a spoiler cover in case you haven't seen the film and catch a glimpse of important stuff!

I'm gonna be brief in explaining how the ending is coming together and I'll explain why I love it but I'll let the videos themselves do a lot of the talkin'! Anyhow, enjoy this list! Indie Underground. Songs will be added / subtracted between now and the end of 2014. You may notice some songs on the list that were released as singles in 2013, but were included on a 2014 album release. Songs are listed in alphabetical order. Don’t see a song that you think that should be included in this list? Comment below! Hipsters Are Now Wearing Flower Crowns In Their Beards. Seriously. (Photos) 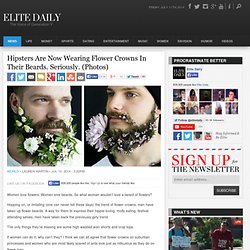 Women love beards. So what woman wouldn’t love a beard of flowers? Hopping on, or imitating (one can never tell these days) the trend of flower crowns, men have taken up flower beards. A way for them to express their hippie-loving, molly eating, festival attending selves, men have taken back the previously girly trend. The only things they’re missing are some high waisted jean shorts and crop tops. 27 World Cup Memes to Help Brazil Laugh Away the Pain. Contemporary Art in San Antonio, TX. Summer is almost over but that doesn’t mean that it’s too late to catch up on some last minute summer reads. NcmfgHg.jpg (2361×3600) What Fine Art Looks Like in the Selfie Era. Art is a reflection of its era. With that in mind, it's not surprising that, in the age of apps and emojis, Ukrainian artist Nastya Nudnik is using the vocabulary of social media to rebrand familiar images for a digital world.

Her collection, Emoji-nation, reimagines some of art history's most celebrated works by adding symbols from our e-world — a move that challenges our conceptions of "traditional" art and makes museum masterpieces accessible to a wider audience. Nudnik's four-part series doesn't concentrate on a specific time period; it covers everything from Michelangelo to Degas to Magritte. However, for a 21st-century viewer, perhaps her most successful and moving interpretations are based on realist paintings by 20th-century American artist, Edward Hopper. B L O O D A N D C H A M P A G N E . C O M: 20 Life-Changing Fonts You Can Download For Free. Polaroid Z2300 Digital Instant Print Camera (White) 20 Life-Changing Fonts You Can Download For Free. A Deeper Look at the Tunnels Under San Francisco.

You normally hear Los Angeles Times and Morning Edition film critic Kenneth Turan reviewing new movies, but this week, we're talking about old films with him instead. Film Guide. 12 Must-See Films and One We Defy You to Sit Through at the SFIFF. I finished my final preview screener from the 2014 San Francisco International Film Festival exhilarated and exhausted. Those two emotions coexisted uneasily during much of my time in the trenches. Halt and Catch Fire. 10 Artists You Can’t Miss at Spring Awakening. In a few weeks, the very home of house music, Chicago, will open its Windy-City arms to music lovers across the country and the world. As the only all-electronic dance festival taking place in Chicago this year, the event promises to draw a big crowd – and an even bigger list of A+ artists and performers.

Robert Longo. REEVES: I don't know if it's because I've worked with you and have been watching closely over the years, and I guess all art is personal in the end, but the themes and periods of your work—the children, the waves, the bombs, the flowers, the God Machines—there seems to be a constant historical perspective to your work. [GENRE MONDAYS] Week 2 - Deep House : electronicmusic. OldSF. Daily Alexa Chung. OMWLL - young tendencies. Astonishing Animation: The Films of Hayao Miyazaki and Studio Ghibli. The secrets of manga faces and expressions, basic character design, and comics are revealed! Manga is the Japanese word for comics and literally translates to “whimsical pictures.” Watch an X-Class Solar Flare Ignite the Skies Over Iceland. SExpand Taken by me from the Isle of Man on the 28th February. DeMilked - Design Milking Magazine. SF-based Sitcom “About a Boy” Star Al Madrigal on the Daily Show, Hippies, & Growing Up in SF.

The Essence of Masculinity – Portraits of Men. The week's best photojournalism. Is Norman Bates a realistic psychopath. Travel photography Singapore Singapore. Last month I spent a few days in Armenia. I have to admit that January is not the best time of the year to visit the country. New Wave Architecture Designs Rock Gym for Polur. ABOUT RACING TO ZERO. 2048.jpg (1400×715) Mary Goes to Spain.

The Intouchables (2011. The 10 most underrated movies of 2013. The 16 Best Photo Essays Of 2013. The Best Films of 2013: Our Critics Choose Their Favorites - Page 1 - Movies. Matt Jensen → Photography. A Place for Big Dreams and Dreamers. Living pretty in the second city. Meet The Real Walter White: The Meth Dealer Who Inspired The Show 'Breaking Bad' (Video)