Divine Shadow Season 1: Justice. ZAC'S HAUNTED HOUSE - DENNIS COOPER. "Literature's relationship to the internet is growing rapidly, and Dennis Cooper is on the forefront of those web-savvy authors defining the new landscape... 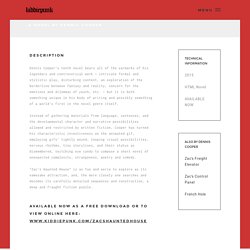 Cooper's work promises to totally recontextualize the ground behind it, thereby revising the way we think. That innovation is particularly evident in his latest release, 'Zac's Haunted House'. The novel appropriates an experience somewhere between carnival mirror labyrinth, deleted Disney snuff film, and a deep web comic strip by Satan, building out the idea that a book doesn't have to simply be sentences on paper, or even terribly concerned with language at all. "- Blake Butler, Vice "Cooper has always written characters whose ineloquence hints at experiences that defy language; now, telling a story almost exclusively in images, he pushes this inarticulateness in a new direction. "Dennis Cooper has written his tenth novel, 'Zac's Haunted House', from inside the internet.

"Here, we do not turn pages. How to Create Suspense: A New Freakonomics Radio Episode. [MUSIC: Danielle French, “Harsh Reality” (from Drive)] Harlan COBEN: Chapter One. 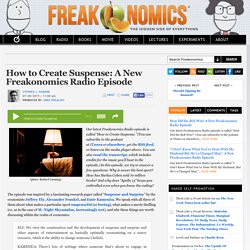 “The stranger didn’t shatter Adam’s world all at once. That was what Adam Price would tell himself later, but that was a lie. Adam somehow knew right away, right from the very first sentence, that the life he had known as a content, suburban, married father of two was gone forever. It was a simple sentence on the face of it. Songs in the Key of Zzz: The History of Sleep Music. The idea makes a certain, if audacious, kind of sense. 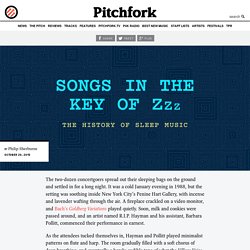 The eye-swivels of REM don't tell us anything about what the brain thinks it sees; they go only up, down, and side to side, like a robotic appendage—directional but senseless. But the vibrations of the inner ear, theoretically, could be an entirely different matter: If the nerve endings were found to fire in response to specific, dreamed sounds—the bark of a dog, say, or the tolling of church bells—then each of those sounds could leave a fingerprint in the form of frequency, wavelength, and amplitude.

To test his theory, Hayman took his custom-fit sensors—pressure-strain gauges that were inserted into the inner ear, which created encephalograph readings of MEMA phenomena—and outfitted them with microscopic microphones. The goal was to eavesdrop on the dream, essentially—as though Francis Ford Coppola's The Conversation were to meet Christopher Nolan's Inception. Someone just uploaded their complete collection of Kmart in-store background music. Attention, Kmart shoppers: here's one for the oddity file. 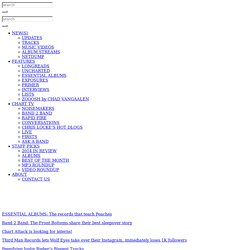 Mark Davis worked behind the Service Desk at the Naperville, IL Kmart in the late '80s and early '90s. Every month, corporate office issued a cassette to be played over the store speaker system — canned elevator-type music with advertisements seeded every few tracks. Around 1991, the muzak was replaced with mainstream hits, and the following year, new tapes began arriving weekly. The cassettes were supposed to be thrown away, but Davis dutifully slipped each tape into his apron pocket to save for posterity. Discogs Turns Record Collectors’ Obsessions Into Big Business. Photo BEAVERTON, Ore. — In the beginning, Kevin Lewandowski just wanted a way to keep track of his techno records. 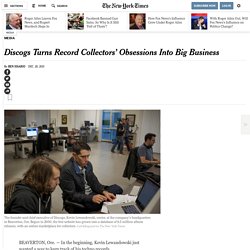 Now, 15 years later, the free website he set up for that purpose, Discogs.com, has become a vital resource for record collectors and the music industry, with a sprawling database of more than 6.5 million releases. And with an online marketplace through which nearly $100 million in records will be sold this year, Discogs has carved out a valuable niche in a market dominated by companies like Amazon and eBay.

Borrowing from Wikipedia’s model of user-generated content, Discogs has built one of the most exhaustive collections of discographical information in the world, with historical data cataloged by thousands of volunteer editors in extreme detail. “Discogs is vital, essential, irreplaceable — a resource I use every day,” said Rob Sevier, a founder of the Numero Group, a Chicago label that specializes in reissuing particularly obscure material. Out of principle, Mr. Mr.