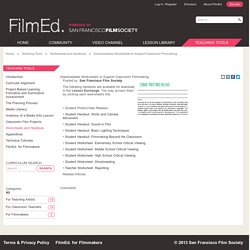 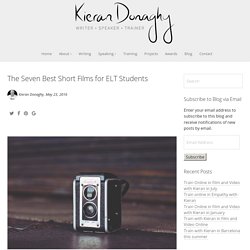 Teachers often ask me how I find the short films I use in my lesson plans. The answer is quite simple: I’ve watched literally thousands of short films and developed an instinct for the type of engaging and simple short films which will work in the ELT classroom. Filmmaking for Kids: Rough, Raw, and Real. Located in the South Bronx, The Cinema School might seem similar to other New York City public high schools. 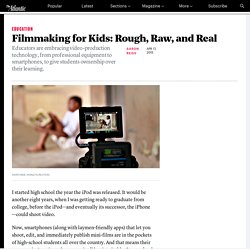 However, its traditional curriculum accounts for just a sliver of the school’s larger teaching model. Film classes are mandatory over the course of a student’s four years; freshmen might work on animated shorts, for example, while seniors are required to produce full-blown thesis films. In fact, students drop their normal course schedules for two weeks annually, when the entire school swings into production mode: Classrooms become movie sets and hallways, film-studio boardrooms. Much of that is possible because of substantial outside support, including equipment donations and collaborations with professionals ranging from David O. San Francisco Film Society. Process Posted by: San Francisco Film Society Once the larger goals of a media arts lesson have been identified and determined, there are of course a multitude of practical considerations that must be addressed in lesson plan design. 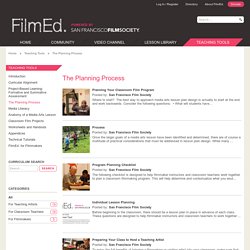 While many ... Program Planning Checklist. How to Create a Storyboard. Storyboard That: The World's Best Free Online Storyboard Creator. Blueprint for the Moving Image. A Case for Filmmaking in the Classroom. In the current test-scores-driven climate, I often find myself having to justify how filmmaking fits into the K12 curriculum. 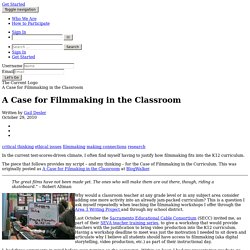 The piece that follows provides my script – and my thinking – for the Case of Filmmaking in the Curriculum. This was originally posted as A Case for Filmaking in the Classroom at BlogWalker. The great films have not been made yet. The ones who will make them are out there, though, riding a skateboard.” – Robert Altman Why would a classroom teacher at any grade level or in any subject area consider adding one more activity into an already jam-packed curriculum? Last October the Sacramento Educational Cable Consortium (SECC) invited me, as part of their SEVA teacher training series, to give a workshop that would provide teachers with the justification to bring video production into the K12 curriculum.

I had three arguments in mind before even turning on the computer. What will be demanded of students in terms of literacy in the 21st century? 16 Websites and Apps for Making Videos and Animation. No-Budget Filmmaking Gear - The DIY Filmmaker. Cinematography Techniques. 10 Tips for Beginner Filmmakers. Student Resources - Building Your Brand as a Filmmaker. Building a Brand as a Filmmaker Scorsese. 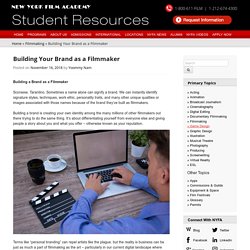 Tarantino. Sometimes a name alone can signify a brand. We can instantly identify signature styles, techniques, work ethic, personality traits, and many other unique qualities or images associated with those names because of the brand they’ve built as filmmakers. Building a brand is creating your own identity among the many millions of other filmmakers out there trying to do the same thing.

Terms like “personal branding” can repel artists like the plague. but the reality is business can be just as much a part of filmmaking as the art – particularly in our current digital landscape where information is ubiquitous, and every man and his dog has a platform to vie for your attention. Acting Tips: 12 Camera Shots Every Actor Should Know. When asked about the biggest piece of advice he could give to aspiring actors, Edward Norton once famously said, “The more you do your homework, the more you’re free to be intuitive; but you’ve got to put the work in.” 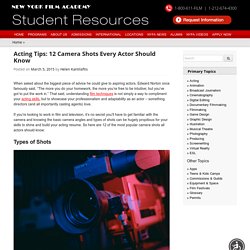 That said, understanding film techniques is not simply a way to compliment your acting skills, but to showcase your professionalism and adaptability as an actor – something directors (and all importantly casting agents) love. If you’re looking to work in film and television, it’s no secret you’ll have to get familiar with the camera and knowing the basic camera angles and types of shots can be hugely propitious for your skills to shine and build your acting resume. So here are 12 of the most popular camera shots all actors should know: It’s all in the name – the aerial shot is filmed from the air and is often used to establish a location (usually exotic and/or picturesque).

ICONIC EXAMPLE: The opening of The Sound of Music (1965). ICONIC EXAMPLE: Jules Winnfield (Samuel L. Making A Short Film: 5 Awesome Tactics For New Filmmakers. Making a short film is the rite of passage for many new filmmakers. 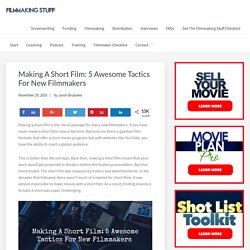 If you have never made a short film, now is the time. Not only are there a gazillion film festivals that offer a short movie program, but with websites like YouTube, you have the ability to reach a global audience. This is better than the old days. 32 Lessons Learned by a First-Time Cinematographer – Asher Isbrucker. 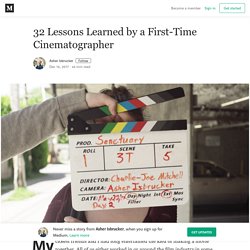 Always have a designated, organized spot for your gear Now that you’ve arrived on set with all your gear and loaded it all out, take the necessary time to organize it before you start shooting. This is why rental houses sometimes offer gear trolleys. Gain Film Experience: How to Make A Short Film. How to Make a Low Budget Short Film (Based on my High School Experience) Seven quick cinematography lessons that will make you a better filmmaker. Cinematography Curriculum. Film Genres. Movie-Making in the Classroom. In our classroom, we enjoy making movies to extend our learning. 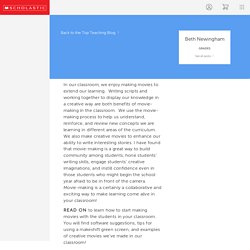 Writing scripts and working together to display our knowledge in a creative way are both benefits of movie-making in the classroom. We use the movie-making process to help us understand, reinforce, and review new concepts we are learning in different areas of the curriculum. We also make creative movies to enhance our ability to write interesting stories. I have found that movie-making is a great way to build community among students, hone students’ writing skills, engage students’ creative imaginations, and instill confidence even in those students who might begin the school year afraid to be in front of the camera.

3-2-1 Vocabulary: Learning Filmmaking Vocabulary by Making Films. Home › Classroom Resources › Lesson Plans Lesson Plan Student Objectives. Lights, Camera, Action...Music: Critiquing Films Using Sight and Sound. Home › Classroom Resources › Lesson Plans Lesson Plan Overview. Film Study Lesson Plans. Effective Classroom Movie Lesson Plan Ideas. If you are unable to show an entire film because of time or school guidelines, you may want to show scenes or clips. You may also want to use the closed caption feature during a film because the combination of reading with film can reinforce student understanding, especially if the film is an adaptation of a play (Shakespeare) or novel (Pride and Prejudice).