Genres generate renewed enthusiasm for school libraries. School libraries increasingly use “genrefication”—the reorganization of collections by genre as opposed to the traditional Dewey Decimal System—to boost circulation and to encourage students to help themselves in finding books. 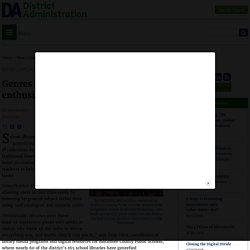 Genrefication emulates bookstores, allowing users to find titles easily by browsing by general subject rather than using card catalogues and numeric codes. “Historically, libraries were these kind-of mysterious places with adults in charge who knew all the codes to where everything was, and maybe they’d clue you in,” says Fran Glick, coordinator of library media programs and digital resources for Baltimore County Public Schools, where nearly 60 of the district’s 165 school libraries have genrefied collections. The district started reorganizing in 2014, when one librarian was eager to “un-Dewey” her library. Immediately after implementation, circulation for fiction titles increased 40 percent while nonfiction shot up 400 percent. Genrefication guide Establish a plan. Genrefying the fiction collection. ‘What sort of books do you like reading?’ 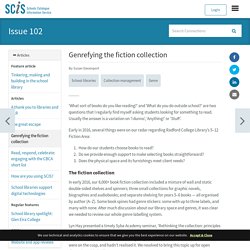 And ‘What do you do outside school?’ Are two questions that I regularly find myself asking students looking for something to read. Usually the answer is a variation on ‘I dunno’, ‘Anything!’ Or ‘Stuff’. Genrefication: Removing Barriers to Access. Small Steps? 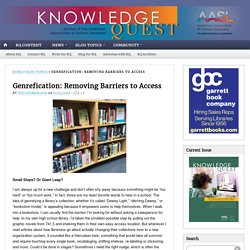 How Genrefication Makes School Libraries More Like Bookstores. “It used to be when a class would come in,” Taylor said, “I’d have a line of 10 kids that needed to ask me, ‘Where’s this book?’ Or where’s this or that.” After genrefication, she said, “some periods came in, and there wasn’t one kid that needed to ask me anything, and they all found books in half the time.” A child who previously floundered “went right over to the Humor shelf, and it took about 30 seconds,” she added. Genrefication is also said to highlight usage patterns and gaps in inventory, allowing librarians to better tailor their offerings to students’ needs. Taylor was able to purge a third of her collection as she discovered just how many books fell into categories the students didn’t care about; she also realized McCaffrey had far too much Fantasy and not enough Adventure.

Librarians wield circulation statistics to support their claims of genrefication success. Arranging library fiction by genre. Changes in fiction arrangement or labelling gives you an opportunity to promote and discuss with library users the characteristics of different genres. It also helps identify personal reading preferences, people who share reading preferences, and effective book selection strategies. Promote at sessions with students as they visit the library. Also consider displaying library posters, wordles (word clouds generated using wordle.net) and other displays with genre information and title examples. wordle.net — Wordle is a tool for generating 'word clouds' from text that you provide.

Posters, promotional material There are many resources available online for posters and other promotional material, for example: Genre challenge — encourage reading across genres. The Dewey Debate. I had the great honor to be asked to guest edit the November/December 2013 issue of Knowledge Quest, the journal of AASL. 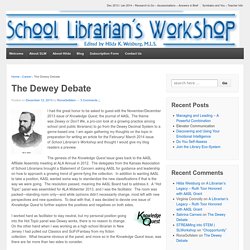 The theme was Dewey or Don’t We, a pro-con look at a growing practice among school (and public librarians) to go from the Dewey Decimal System to a genre-based one. I am again gathering my thoughts on the topic in preparation for writing an article for the February/ March 2014 issue of School Librarian’s Workshop and thought I would give my blog readers a preview. The genesis of the Knowledge Quest issue goes back to the AASL Affiliate Assembly meeting at ALA Annual in 2012. The delegates from the Kansas Association of School Librarians brought a Statement of Concern asking AASL for guidance and leadership on how to approach a growing trend of genre-fying the collection. What Libraries Can Learn from Bookstores. Summer Project: Kill Dewey. This summer, a legend will fall. 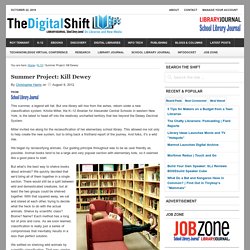 But one library will rise from the ashes, reborn under a new classification system. Kristie Miller, the K–12 librarian for Alexander Central Schools in western New York, is the latest to head off into the relatively uncharted territory that lies beyond the Dewey Decimal System. Miller invited me along for the reclassification of her elementary school library.

This allowed me not only to help create the new system, but to bring back a firsthand report of the journey. And folks, it’s a wild ride. We began by reclassifying animals. But what’s the best way to shelve books about animals? We settled on shelving wild animals by scientific classification. After some research—OK, a quick Wikipedia search—we decided to go with the following groupings: amphibians, birds, fish, mammals, reptiles, and invertebrates. Within each section, wild animals are shelved alphabetically by family, using the common name and then by species, again by common names. Separate or Keep Together? By Melanie A. 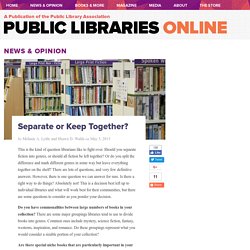 Lyttle and Shawn D. Walsh on May 5, 2015 This is the kind of question librarians like to fight over. Should you separate fiction into genres, or should all fiction be left together? Or do you split the difference and mark different genres in some way but leave everything together on the shelf? Do you have commonalities between large numbers of books in your collection?