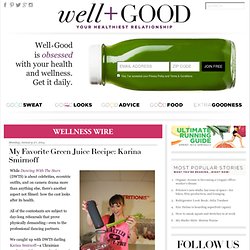 (Photo: JCPenney) While Dancing With The Stars (DWTS) is about celebrities, eccentric outfits, and on camera drama more than anything else, there’s another aspect not filmed: how the cast looks after its health. All of the contestants are subject to day-long rehearsals that prove physically demanding—even to the professional dancing partners. We caught up with DWTS darling Karina Smirnoff—a Ukrainian professional dancer on the show and, after a series of high-profile relationships, now a celebrity in her own right—at an event for JCPenny’s Xersion activewear line last week. One thing she says she does to stay fit besides Bikram yoga, salsa dancing, and jogging at the gym? My Favorite Green Juice Recipe: Chelsea Leyland. British babe turned New Yorker Chelsea Leyland is a famed DJ and model. 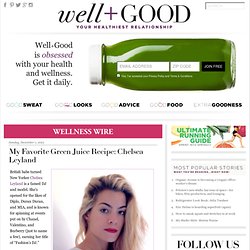 She’s opened for the likes of Diplo, Duran Duran, and MIA, and is known for spinning at events put on by Chanel, Valentino, and Burberry (just to name a few), earning her title of “Fashion’s DJ.” But despite her Queen Bee status on the nightlife scene, Leyland maintains healthy lifestyle practices like “eating well, trying to get as much sleep as possible, and getting B-12 shots,” she says. Leyland is just one example of the growing number of fashion darlings, such as close friend Hannah Bronfman and Sport’s Illustrated swimsuit model Julie Henderson, who skip the cigarette-and-Diet Coke diet for a greener, leafier, more wholesome lifestyle.

“I have a smoothie and green juice every day,” Leyland says. “Whether I make them myself or go to Juice Press, I try to make it a priority. Here’s Leyland’s very own ”Mean Greeney” recipe, which no doubt helps her bounce back from spinning into the wee hours. My Favorite Green Juice Recipe: Amanda Chantal Bacon. Amanda Chantal Bacon, in Moon Juice, Silver Lake (Photo: Facebook.com/MoonJuiceShop) There’s something special about Amanda Chantal Bacon. 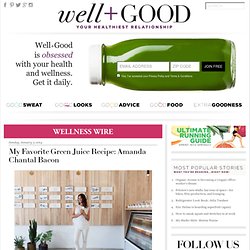 She’s one part juice whisperer, one part holistic genius—and runs one of the coolest, out-of-this-world juice bars on the planet. Having served as a chef under Suzanne Goin (whose mentor was Alice Waters), Bacon sipped DIY juices to keep her energy up during long stints in the kitchen. My Favorite Green Juice Recipe: Katrine van Wyk. 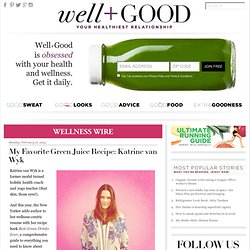 And this year, the New Yorker adds author to her wellness-centric resume with her recipe book Best Green Drinks Ever, a comprehensive guide to everything you need to know about green juice and smoothies. (We reviewed it here.) The book also comes with a forward by functional medicine guru Frank Lipman, MD, who also happens to be her boss. My Favorite Green Juice: Andrea Bemis. (Photo: Andrea Bemis/Dishing Up the Dirt) Andrea Bemis is the creator of Dishing Up The Dirt, a popular food blog that documents the farm fresh meals that Bemis makes for herself and her husband, Taylor. 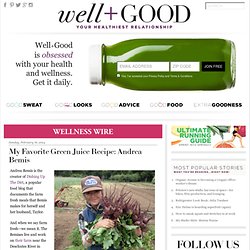 And when we say farm fresh—we mean it. The Bemises live and work on their farm near the Deschutes River in Oregon, where the green-thumbed couple grow a wide array of gorgeous, organic seasonal produce that they sell to restaurants and at local farmers’ markets. All the writing recipes, cooking, and snapping photos, after a day of farming doesn’t come without some serious stamina. “Working from sunrise until sunset on our farm requires a lot of physical energy and there’s nothing more powerful than a hearty green juice to kick start the day,” Bemis says. But working only with the ingredients from a seasonal farm, Bemis is forced to get creative with her juice recipes from season to season. 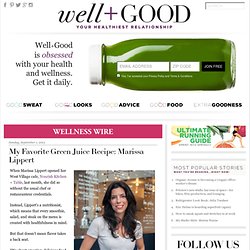 Instead, Lippert’s a nutritionist, which means that every smoothie, salad, and steak on the menu is created with healthfulness in mind. But that doesn’t mean flavor takes a back seat. “It’s about amazing, delicious food that just happens to be healthy,” she says. Think seasonal breakfast tarts and quiches, Greenmarket-sourced salads, and organic roast chicken—all served in a tiny, homey space that feels like the set of a West Elm catalog photo shoot. We asked Lippert to give us a tiny taste of Nourish, with her take on an energizing green juice meant to kickstart your day.