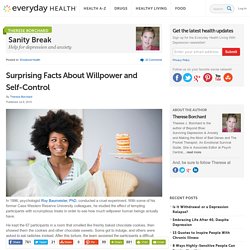 With some of his former Case Western Reserve University colleagues, he studied the effect of tempting participants with scrumptious treats in order to see how much willpower human beings actually have. He kept the 67 participants in a room that smelled like freshly baked chocolate cookies, then showed them the cookies and other chocolate sweets. Some got to indulge, and others were asked to eat radishes instead. Two years later, Dr. Since this groundbreaking research, many other studies have confirmed the case for willpower depletion, or “ego depletion” as it is called by psychologists.

Not everyone agrees that our amount of willpower is fixed. When people believe that willpower is fixed and limited, their willpower is easily depleted. I’m sure the Stanford team meant well, but I side with Baumeister. Especially after my own experiment at The Melting Pot, the fondue place. Improving Willpower: How to Keep Self-Control from Flagging. Why does willpower often seem to fail us, just when we need it most? 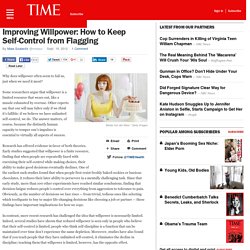 Some researchers argue that willpower is a limited resource that wears out, like a muscle exhausted by overuse. Other experts say that our will may falter only if we think it’s fallible: if we believe we have unlimited self-control, we do. The answer matters, of course, because the distinctly human capacity to temper one’s impulses is essential to virtually all aspects of success.

Research has offered evidence in favor of both theories. Early studies suggested that willpower is a finite resource, finding that when people are repeatedly faced with exercising their self-control while making choices, their ability to make good decisions eventually declines. In contrast, more recent research has challenged the idea that willpower is necessarily limited. 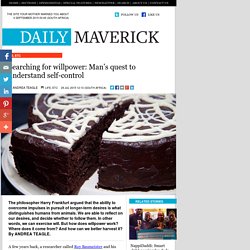 Willpower, they said, is not a skill; rather, it is drawn from a finite resource. The more you use it, the more depleted it becomes. Baumeister compared self-control to a muscle: although exercising it can strengthen it over time, it nonetheless becomes fatigued in the short term. A flood of studies (close to 200) followed seeking to demonstrate this effect, dubbed “ego depletion”. They typically involve two consecutive, unrelated tasks requiring self-control. The first of such studies, published in 1998, had two sets of participants wait in a room where chocolate-chip cookies and radishes were laid out on a table. After eight minutes on average, those in the cookie-deprived group gave up. When Willpower Isn’t Enough: A New Freakonomics Radio Podcast. [MUSIC: Seks Bomba, “It Takes Two to Tango” (from Somewhere In This Town)] Stephen J. 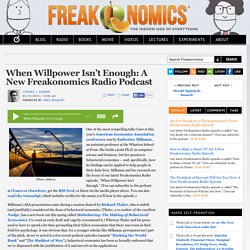 DUBNER: Hey, podcast listeners. You are about to hear the 200th original episode of Freakonomics Radio. Have you missed any? What about No. 19: “Waiter, There’s a Physicist in My Soup, Part 1.” [MUSIC: Vagabond Opera, “Ganef” (from The Zeitgeist Beckons)] Katherine MILKMAN: So I struggle at the end of a long day to get myself to the gym even though I know I should go. [MUSIC: Alan Fagan, “Brazilian Breeze” (from World Music)] DUBNER: That’s Katy Milkman. MILKMAN: And I’m an assistant professor at the Wharton School, where I study behavioral economics and how people make choices. When Willpower Isn’t Enough: A New Freakonomics Radio Podcast. Is willpower really a finite resource? Thank you for your interest in Patheos newsletters! 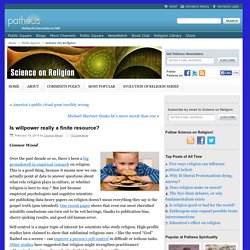 Please enter your email address below and click the "Subscribe" button. Thank you for your subscription. You can visit your Preference Center to complete your profile and see what else we have to offer. We apologize, we were unable to complete your subscription at this time, please try again later. If this error persists please contact us at communications@patheos.com. Like what you're reading? Conserve Your Willpower: It Runs Out. Ever wonder why your resolve to hit the gym weakens after you’ve slogged through a soul-sapping day at work? 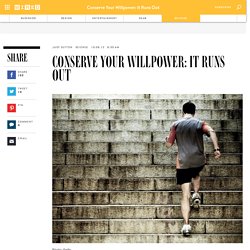 It’s because willpower isn’t just some storybook concept; it’s a measurable form of mental energy that runs out as you use it, much like the gas in your car. Roy Baumeister, a psychologist at Florida State University, calls this “ego depletion,” and he proved its existence by sitting students next to a plate of fresh-baked chocolate-chip cookies. Some were allowed to snack away, others ordered to abstain. Afterward, both groups were asked to complete difficult puzzles. The students who’d been forced to resist the cookies had so depleted their reserves of self-control that when faced with this new task, they quickly threw in the towel. Further studies have suggested that willpower is fueled by glucose—which helps explain why our determination crumbles when we try to lose weight.